Aeterna Noctis is a beautiful and tough-as-nails Metroidvania-style platformer by Spanish developer Aeternum Game Studios. Featuring a sprawling and varied world, difficult platforming challenges, and gorgeous art direction, Aeterna Noctis will be just what fans of games like Hollow Knight and the 2D Castlevania entries have been looking for.

A world of darkness and light

In the world of Aeterna, the King of Darkness and Queen of Light, rulers of their respective factions, have been at war for aeons. Cursed with immortality by the supreme creator of their world who goes by the name Chaos, the King and Queen are in constant conflict as they each go through cycles of victory and loss. The player follows the King of Darkness after his defeat to the Queen of Light, having lost most of his powers and memories in the fight. The main quest will take you across the land to recover the seven fragments of the Shrine of the Kings to help the King regain his abilities and ascend to the heavens once again.

As with most Metroidvanias, the plot and backstory in Aeterna Noctis are mostly drip-fed through background details and quest giver dialogue without being front and centre. Despite being the King of Darkness and fighting foes with a shadowy sword and blood scythe, the protagonist is not evil by any stretch, and the details that are revealed as the plot unfolds do a lot to add depth to him and the world around him. The various side-quests that can be undertaken often also have separate plot threads attached to them, or at least feature interesting minigames, like recovering music sheets to play on the King’s organ.

It ain’t easy being King

One thing to note early on is that Aeterna Noctis certainly doesn’t pull its punches. While Metroidvania platformers tend to be on the more difficult side on average, Aeterna Noctis is fond of throwing tricky pixel-perfect platforming challenges with few checkpoints even early on. These sequences increase in complexity as the player unlocks new abilities. As a fan of difficult 2D platformers like Hollow Knight and Celeste, I was fine with the level of challenge. The game could stand to cut down on some of the more lengthy sections where you often need to chain wall climbing, dashes, teleport arrows, and jumps together in just the right combination or else start it all over again. Though the fact that you generally teleport back to the last solid ground on death MOSTLY prevents the challenge from becoming frustrating.

The boss fights in Aeterna Noctis are also quite tough. However, they tend to have the Dark Souls quality of feeling at first insurmountable, until you get used to their attack patterns and learn how to recognise and counter them. For some of the more drawn-out, multi-stage boss fights that involve short platforming sections partway through, the game really could have done with mid-boss checkpoints, or at least a visible enemy health bar to get a sense of your progress. Dying to a miscalculated dash or errant projectile is hair-pullingly frustrating on its own, without needing to take a 5-minute boss fight all the way from the top.

I’m also not sure that I’m a fan of the way Aeterna Noctis utilises its experience system. Not unlike FROM Software’s titles, upon perishing you leave a Soul at your place of death and have an opportunity to retrieve it and your lost experience points. Unlike in Dark Souls, however, the Soul doesn’t disappear, and sticks around where it is until you either go back and get it or pay the Grim Reaper an exorbitant amount of money in the hub town to get it back for you. While it ensures that you have more chances to regain your lost experience, it means that you don’t keep any experience you lose while in a Soulless state. You’d better hope you died somewhere that is easy to return to, otherwise it can be frustrating to get that experience back.

The player has multiple options in Aeterna Noctis to improve their chances in combat. These include upgradeable perks, equipable gems, and the new abilities that you unlock throughout the game. The many side quests that can be undertaken are also a great source of in-game currency to spend on upgrades and new items. I also appreciated the ability to reset your perk point allocations whenever you want. It gave the player a degree of flexibility to experiment with new skills without substantial investment.

Compared to many other Metroidvania games, Aeterna Noctis takes steps to provide a sense of guidance to the player, without compromising the thrill of exploration. Although sidequest locations don’t show up on your map, the general location of the next shrine fragment does. As such, it is generally clear where you need to go to advance the game’s critical story path.

The game is somewhat less accommodating about making it clear if you have the right ability to proceed and whether you missed something important. Admittedly, backtracking and exploring for its own sake is an important part of the Metroidvania identity. Whether the player is a fan of a more hands-off progression path is up to personal taste.

Going out of your way can net you optional perk upgrade points, chests with loot, and collectable Soul Mirror fragments, if you can find them. Teleport points are set close enough that it generally didn’t feel like a chore to get around and backtrack when required. 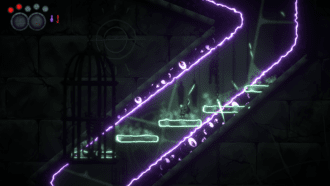 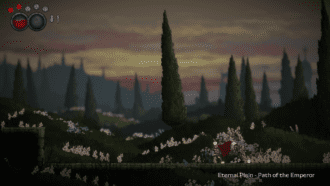 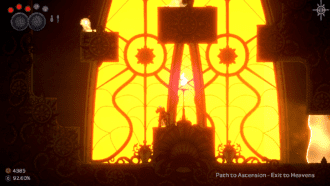 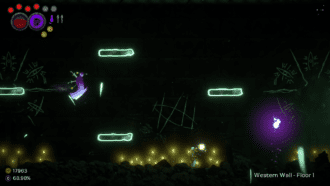 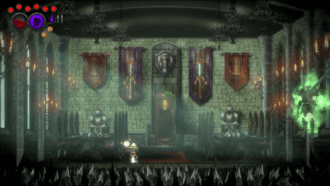 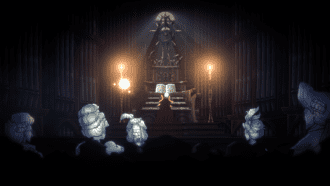 “The hand-drawn art style looks great, with memorable side characters and intricately-designed bosses.”

Where Aeterna Noctis shines is in its presentation. Juan Ignacio Teruel Torres’ soundtrack is thrilling and mysterious, giving each of the game’s 16 zones their own flavours, and ramping up the tension during the boss fights. The hand-drawn art style looks great, with memorable side characters and intricately-designed bosses. There are a ton of small cool touches with the visuals, like the steam rising from lava in the Forge level, or the way that platforms would wobble and expel particle effects when you jumped on them in Temple of the Kings.

The developers even created an in-universe language for the spoken in-game dialogue, called Aeternan. It’s a small touch, which goes a long way towards making Aeterna feel exotic and immersive.

Aeterna Noctis is definitely a game that will give you plenty to do. With 16 sprawling zones, loads of side quests, optional bosses, and dozens of collectables, completing the game will take you a while even if you’re focusing on the critical path.

Aeterna Noctis is an amazing example of how a developer can mix together gameplay elements from many popular platformers of the past few years to construct something greater than the sum of its parts. While it owes a gameplay debt to games like Hollow Knight, Dark Souls, and Castlevania, Aeterna Noctis’ fascinating setting and enjoyable gameplay make it easy to appreciate on its own. Its beautiful world and gorgeous soundtrack make exploring Aeterna is a joy, even when its high difficulty is knocking you down over and over. If you’ve been seeking your next Metroidvania fix, Aeterna Noctis is definitely worth diving into.