Be inducted into a corrupt League of Wizards, find true love as a horse, bench press baddies as a Bodybuilder, and create an army of undead as a Zombie—Nobody Saves the World is the newest zany hack and slash game by Guacamelee! developer Drinkbox Studios.

Waking up in a grimy and abandoned shed, our protagonist Nobody has a typical case of amnesia. With no purpose or direction, Nobody gets caught up in the disappearance of the powerful Wizard Nostramagus and a Calamity that is spreading an infectious disease across the world. If you’re thinking this scenario creates too big of a shoe for a nobody to fill, you would be right. Although after luckily happening upon (or rather stealing) a magical wand, Nobody is gifted with the ability to transform into 15 different ‘Forms’ and is hopefully now up to the task of saving the world!

Nobody Saves the World takes creative gameplay to its highest potential by blending components of different genres together to create the hybrid hack and slash game of your dreams. Nobody is on a mission to find gem fragments that are the key to tracking down the missing Nostramagus, but they’re locked deep within dungeons surrounded by swarms of baddies. Clearing the dungeons means testing your mettle against baddies with different immunities and weaknesses, but if you die then you’ll find yourself right back at the entrance of the dungeon. Sounds familiar? Nobody Saves the World utilises both rogue-like and dungeon crawler components to create intense fast-paced challenges. However, the game isn’t confined to just clearing dungeons, there is a whole world to discover that takes you and Nobody through a surprisingly open RPG narrative.

A rat, necromancer, zombie, ghost and even a dragon—these are only some of the 15 Forms to choose from in Nobody Saves the World. One of the standouts in this already polished game is Drinkbox Studios’ ability to make unusual classes interesting to play. I never thought zooming around as a slug spitting slime balls or rolling around as an egg trying to find big birds to sit on me would make for entertaining gameplay, but I was pleasantly surprised. Scrapping the commonplace class tropes that we usually find in fantasy video games, Nobody Saves the World takes some of the most unappealing class types and pairs them with badass abilities to make for hilarious and weirdly powerful Forms. 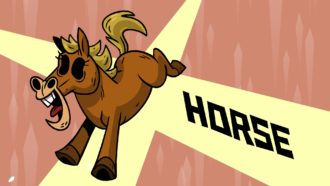 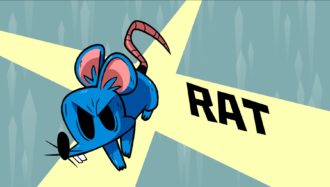 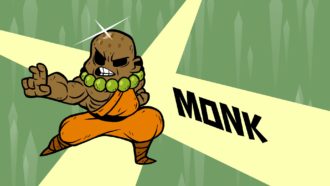 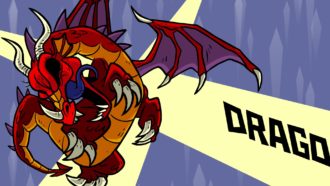 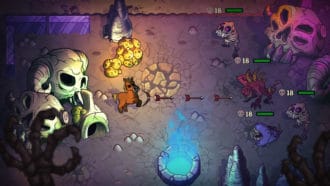 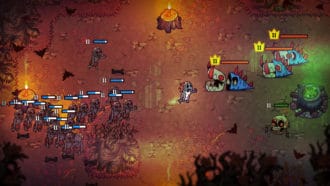 Each region embodies a theme that is stretched to the extreme not only through its environment but through characters, quests, and tone. On the East is Damptonia, a cruddy swampland housing the League of Wizards and decaying fields of pumpkins. There are disguised aliens trying to find their way home and a witch with a thirst for broomstick racing. There’s a suspicious Dungeon made from sweets and gingerbread that the owner, a witch, insists isn’t to entice children, but you can never be too sure. In the West you’ll find Rustrock Barren, a canyon filled desert wasteland housing shady characters wanting to relieve you of your purse and the equally untrusting Thieves Guild. Bounties are aplenty in these parts of the World and an unstable Power Plant is spreading toxins through the town, which you are tasked with shutting down. The extremity in which Nobody Saves the World pushes the individuality of each region generates an unmatched curiosity to explore the very large open world. 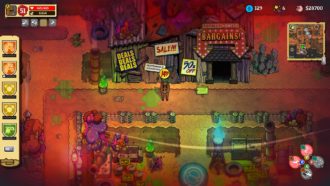 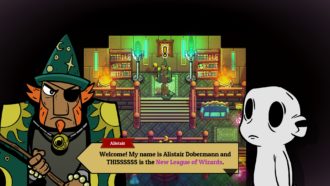 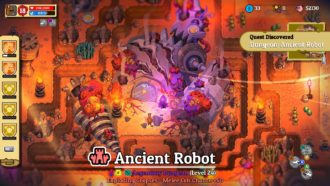 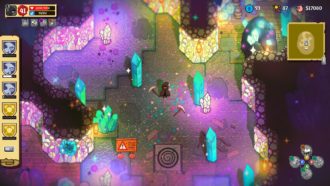 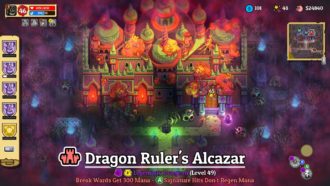 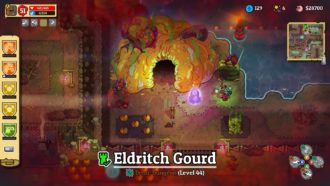 The game, however, is no sandbox, and there is an order to the chaos which comes in the form of a levelling system. Nobody Saves the World splits each region into recommended levels you’re expected to reach before exploring. To progress, you clear dungeons and to unlock dungeons you need wands, which is a currency you attain through completing objectives for each of your 15 Forms and completing quests for other characters in the region.

Objective-based levelling is an interesting concept because instead of levelling in the traditional sense, which usually involves killing enemies to gain experience, Nobody Saves the World forces you to experiment with different Forms through its form-locked objectives. Instead of buddying up close to the one Form that suits your play style, you have to kill baddies in each form to level and progress the game. Surprisingly, there was very limited backtracking with the objective-based levelling. I only had to re-do a couple of dungeons later on in the game to complete objectives with Forms I hadn’t used as much, which is a testament to the amount of content available to you in the game.

Additionally, levelling is split into two types. You have your overall level, which I explained above, and individual levels for your 15 Forms graded from F to S. Form levelling is done basically the same way, however there are different rewards. When one of your Forms reaches a particular grade level, it unlocks new abilities, passives, and even more Forms. Nobody Saves the World is successful in creating a levelling system that is complex and unique, but never overwhelming because it slowly introduces new concepts as you explore.

Throughout the 20-hour runtime, you will be undone by the wit, charm, and detail of this amazing game. Every layer, from the environment, to the characters, dungeons, and levelling system, are so seamlessly interwoven with each other that you can’t help but applaud Drinkbox Studio for making such a polished and stylised game.

I can’t praise Nobody Saves the World enough for both its undeniable style and interesting game mechanics. The world is fleshed out and detailed, which allows the characters and environment to come to life. The Forms available create a unique class system that I personally haven’t seen before, especially because the character designs are so eccentric and interesting. The dungeons are all thematically compelling with tough challenges that make you have to experiment with different abilities and combinations. Add to this co-op compatibility and you’re left with a remarkable release that’s ready to bestow you and a friend with unrivalled joy.