GRID Legends is the fifth instalment in the franchise, taking drivers on high-octane races around street circuits and real-life race tracks. Known for its edge-of-your-seat racing and Codemasters’ driving game specialty, GRID tries to bridge the gap between the competitive crowd and casual racers. Now that EA is publishing, this entry adopts full-motion video (FMV) with professional actors for a unique take on the story mode. With over 250 career events and many, many licensing deals, the content and quality are here but this entry might miss the mark for the big racing fans.

Drama on the track

Driven to Glory is GRID Legend’s answer to the famous Netflix series Formula 1: Drive to Survive. The story is portrayed through FMV snippets, styled like a documentary, of the fake team Seneca Racing and its crew. Between races, you’ll be introduced to Ajeet, the passionate Engineer, Yume, your teammate driver, and more all performed surprisingly well. Most notably, Ncuti Gatwa from Sex Education plays rival driver Valentin Manzi.

The acting here is charming and believable, with just a touch of drama, making it a delightful story to follow. It’s actually the main highlight of the game, making it a standout feature. There are inconsistencies between the FMV and what actually happens in the races, yet it’s still a fun ride. I’d love to see this story style refined for future Codemasters games. A Drive to Survive collaboration for the next F1 game has outstanding potential.

“The acting here is charming and believable, with just a touch of drama, making it a delightful story to follow.”

Unfortunately, there are issues with player direction. GRID Legends immediately puts players into the driver’s seat with minimal explanation of progression and how unlocking cars works, the multiplayer and online races, or creating your team until you voluntarily quit the story mode and start poking around in the main menu. One of the game’s main selling points, the Race Creator that allows for over a million race condition combinations, is barely acknowledged until a tooltip pops up.

You’ll level up your driver and unlock team upgrades and new cars as you play. Most locked cars can still be used with only 50% of the earnings and no progression for improvements. Considerably basic upgrade tiers are unlocked as driver level increases, allowing new abilities like push commands to your AI teammates or reducing costs to repair vehicles. These skills are only effective in solo career mode, which makes sense but detracts from any desire to level up.

Online multiplayer is straightforward. Pick the track, race category, and set up a session that anyone can jump into. The ability for mid-game joining is great if you’re looking for that, otherwise selecting a private session or opting for offline play is ideal. Cross-platform multiplayer will also extend the life of this online community, if when the game launches the servers and capabilities work as intended. 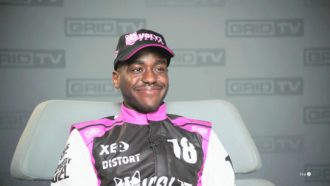 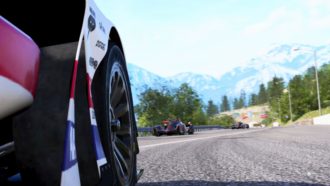 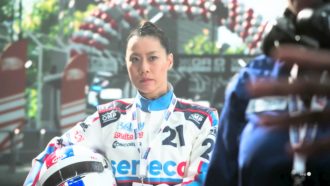 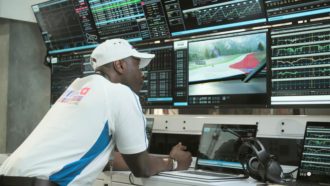 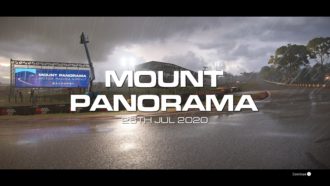 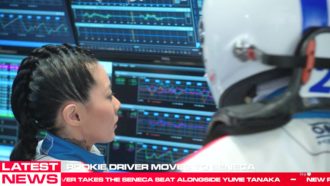 There are more than 130 tracks to race on, including real-life circuits like the Indianapolis Motor Speedway or the fictitious street circuits in San Francisco or Paris. They all feel unique and well-made, the developers mastering their knowledge of what makes a solid track. Changing weather in each race feels fresh and really shows off the visuals. Driving through heavy rainfall on Mount Panorama made the cockpit view much more challenging and exciting with the remarkable water drops and effects.

Cars are split into categories, including Touring, Semi-Trailer Truck, Open-Wheel, Stadium Trucks, Drift Cars, and Electric Cars. With over 100 cars to race, each category plays differently from the last. Your typical Touring cars and Open-Wheel are straightforward, and the truck races have small ramps on track for some spectacular crashes.

Electric cars add a boost zone, like Mario Kart or activating DRS in an F1. Drivers need to enter and exit yellow boost gates to generate power and then expel the extra energy to speed ahead (also, if this is a ploy to make electric vehicles more likable, then I’m all for it). The variety in gameplay freshens up the otherwise stale racing experience.

Cars handle like other simulator racers, with realistic cornering and acceleration. You’ll need to focus on meeting the apex of each corner, making smart overtaking decisions, and speeding through long straights. However, there are also bonuses for slipstreaming drivers by staying close behind them, bumping into others, drifting, and airtime.

Here lies the game’s biggest problem… GRID Legends doesn’t really know what it wants to be. A simulator at the surface but the systems and inventive driving categories lean towards arcade gameplay. It’s like EA told Codemasters to make their game more accessible and just tacked on arcade mechanics to their existing realism-focused engine. You can choose to switch off specific simulator settings, turning races into a peaceful Sunday drive with no challenge at all.

On the other hand, with all controls and assists off, simulator racing doesn’t feel right either. Driver AI is designed to make dangerous overtakes, corner decisions, and even purposely bump like a Need for Speed game at times. The opposite of realistic gameplay.

It’s an odd disconnect more apparent when you consider the tone of the game. GRID Legends and the story is set up very much like a serious racer. At the same time, the gameplay leans towards that exciting, action-packed appeal. Don’t get me wrong; there are certainly thrilling moments – still, the blend of arcade and simulator needs to be revisited from a game direction perspective. 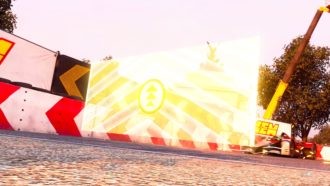 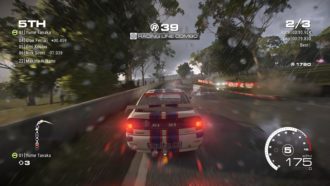 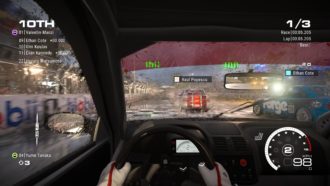 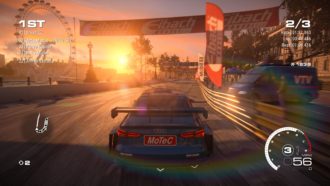 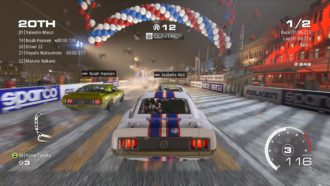 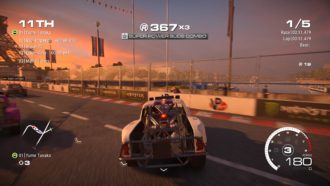 Playing with the PlayStation 5 DualSense controller might be a redeeming feature of the experience. The adaptive triggers and haptic feedback react superbly with racing, making the accelerator trigger lock in a crash or vibrate rhythmically with the track’s surface. You can really feel the sense of driving. The hardware is well used and makes it worth considering a console purchase.

“You can really feel the sense of driving.”

Unfortunately, optimisation for racing wheels isn’t perfect. Testing with a Thrustmaster T150 wheel and pedals, it functions with little to no feedback. Steering the wheel feels the same in all cars, like turning it through a pile of mud and no lock upon impact. Another reviewer I spoke with running a Thrustmaster TS-XW and Thrustmaster Shifter on PC had no issues at all, even saying the setup runs better than last year’s Forza Horizon 5. So, your mileage may vary.

At the start of each race, you’ll be able to tune your car by teetering a bar to the left or right for gear ratio, springs, dampers, anti-roll bars, and brake bias. There are no numbers or units, just a descriptive “soft” or “firm” to describe how you’re tuning the car. It keeps it effortless and briefly explains what each option does, but gearheads will not enjoy the limited tuning tools. 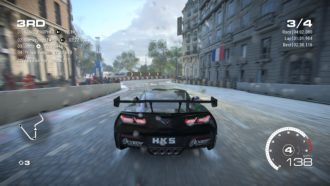 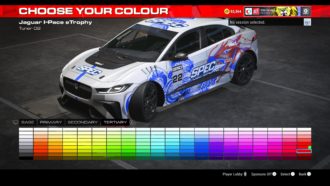 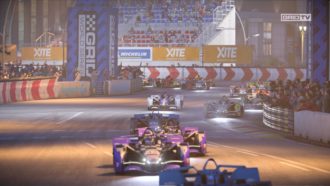 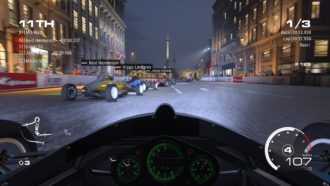 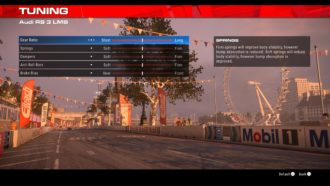 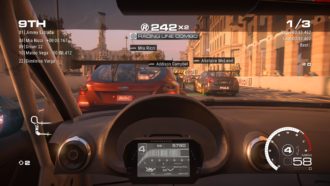 GRID Legends takes real advantage of surround audio. Especially utilising the PlayStation 5’s 3D audio capabilities, the driving experience is heightened. In cockpit view, hearing cars moving left to right without having to look behind you or the chassis of the car shaking about on rougher terrain is outstanding. Even with a half-decent headset you can notice the spatial audio.

The one downside to the sound is the mid-race music. These tracks sound like generic action movie car chase scores with no depth. With strong examples for comparison like Forza Horizon’s licensed soundtrack, GRID Legends pales in comparison and truly needs something similar.

The cohort of cars is all gorgeously rendered, with glossy paint shining in the blooming sun or scratched front bumpers bouncing, trying to cling onto the damaged vehicle after a severe crash. They aren’t the most impressive graphics, but Codemasters has attention to detail for every car they model, and it’s special to play.

GRID Legends is a mismatched racing game with a surprising story mode and features. The gameplay is an awkward mix of simulator and arcade that doesn’t lend itself to either’s strengths, and with puzzling direction will likely alienate fans of both. Yet, Driven to Glory and the sensational crashes in races make for good fun. With Codemasters’ car expertise and implementation of hardware accessories, the experience is worth trying. Still, coming up against other big-name racing series, I don’t think GRID Legends will make the podium finish.