KINGDOM of the DEAD Review – Blast of the past

KINGDOM of the DEAD, RANDOM capitalisation ASIDE, is a retro-styled horror-FPS with a very distinctive art style. Despite its eye-catching hand-drawn aesthetic, it doesn’t bring too much innovation to the table gameplay-wise. However, while being somewhat rough around the edges and lacking on the narrative front, it’s a fun enough ride while it lasts.

KINGDOM of the DEAD has you playing as Agent Chamberlain, a professor-turned agent for the GATEKEEPER Organisation, whose goal is holding back the forces of the dead and closing the gates that they are using to invade the world of the living. Accompanied by his trusty steed and a talking sword, each level takes you to various spooky locales, like a mansion, a crypt, and a forest among others.

KINGDOM of the DEAD is certainly retro in how it approaches its narrative, which, in the style of 90s first-person shooters, means a light touch. Aside from the intro and ending, the only times that Chamberlain and his sword sidekick exchange words are very short interactions while riding to their next destination. I don’t mind the lack of dialogue too much; it at least keeps the pacing up in gameplay. However, it does make the small nuggets of story they did include, like Chamberlain being a former professor, feel underdeveloped. Aside from the record books that act as mid-level checkpoints, the protagonist’s former profession isn’t really brought up outside of the story description at the start. Admittedly, the game’s target audience of 90s FPS enthusiasts probably won’t mind; even the new DOOM entries understand that the narrative in those old games was never particularly important. Still, if you were seeking a horror-FPS with more of a character or story focus, you won’t find it in KINGDOM of the DEAD. 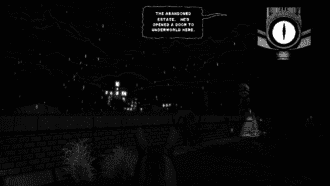 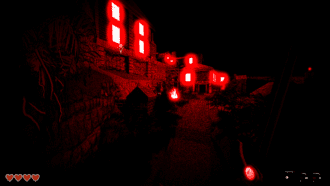 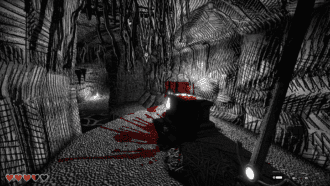 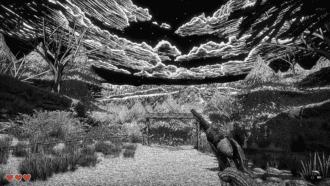 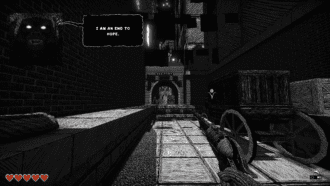 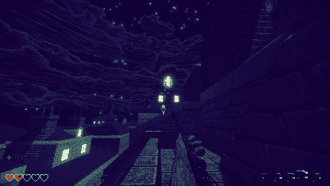 Once you arrive at your destination, you start with the shooting. You begin each level armed only with your sword and a pistol, although more weapons can be found tucked away. It doesn’t exactly reinvent the wheel with the gunplay; the closest thing KINGDOM of the DEAD has to upgrade mechanics are temporary health upgrades, which last only for that level. The game also has its share of memorable, epic-scale boss fights to cap off each mission. The bosses in particular can often kill you in one hit, making these fights thrilling chases as you stay away from them frantically looking for ammo and weapons around the arena to fight back.

The way that KINGDOM of the DEAD approaches difficulty is interesting. When selecting the next level in your hub office area, you are given a selection of three difficulty levels. While each setting does increase the aggressiveness and durability of your foes, they also add additional modifiers, like needing to locate a certain out-of-the-way collectable or ensuring that no civilians are killed. It added an incentive to replay the levels and approach them in different ways with these additional restrictions. Admittedly, some kind of gameplay compensation for completing higher difficulty levels, like new starter weapons, upgrades, or even just some sort of cosmetic reward, might have provided more of a reason to go through levels multiple times.

“The art direction looks especially good in motion, particularly the way the lighting will illuminate enemies and the path forwards in dramatic ways.”

The main string to KINGDOM of the DEAD’s bow is its unique visual style. It has a monochrome pen and ink aesthetic which reminded me of Return of the Obra Dinn. While I have complained about visually dull or confusing monochrome art styles before, it works rather well here. Yes, the zombies often blend in with the background shadows, but considering it’s a horror game where you’re SUPPOSED to be surprised by enemies jumping out of nowhere, it at least feels thematically appropriate.

The art direction looks especially good in motion, particularly the way the lighting will illuminate enemies and the path forwards in dramatic ways. Furthermore, while the level design favours cramped hallways and rooms, its wide-open areas are gorgeous, particularly when you can see the sky. Plus, having the blood of defeated foes splattered across the walls retain its red colour is a nice touch.

Unfortunately, there are a handful of times the shadows pop in jarringly, along with other visual glitches, that spoil the effect. I also found the 2D fire effects to contrast awkwardly with the 3D graphics, sticking out like a sore thumb in an otherwise consistent visual design.

KINGDOM of the DEAD provides different colour palettes to choose from in the options menu. Unlike games like Gato Roboto, you start with all of them rather than them being unlockable rewards, which felt like a missed opportunity. Still, you can make everything sepia-toned, invert the colours, or even use the eye-searing red-and-black Virtual Boy colour scheme if you so desire.

I also have to praise the soundtrack in KINGDOM of the DEAD. Not unlike the gameplay, it shows its retro inspirations, with a fast-paced techno soundtrack that still feels fitting despite the game’s 19th Century setting. You can listen to the full soundtrack in the hub area, which is always a feature I enjoy when it is included.

KINGDOM of the DEAD is a pretty damned good horror FPS with enough compelling ideas to stand on its own. The monochrome, hand-drawn visuals really sell the game’s Lovecraftian-noir tone, without interfering with gameplay. Plus, its varied additional mission objectives make its difficulty settings feel more multi-layered. Still, with its short play-time, minimal plot, and lack of unlockable content, it won’t be engaging for everyone. However, for those looking for some retro FPS fun, KINGDOM of the DEAD is a unique enough experience to be worth the recommendation.