A Memoir Blue is both beautiful and extremely heartfelt. Another indie game from indie publisher Annapurna Interactive, this game feels right at home with its contemporaries in the indie space. Unlike the electrifying gaming experience that is The Artful Escape, also published by Annapurna, A Memoir Blue is a much more somber and reflective game that focuses on lost connections and being stuck in the mistakes of the past.

This game is Cloister Interactive’s debut title, and for a new team’s first outing, it is stunning to behold. While its length is a point of contention for some players, I was pleasantly surprised by the game’s singular focus and richness in theme.

A Memoir Blue tells the story of Miriam and her estranged relationship with her mother. We find Miriam as a grown woman living alone in her apartment, reflecting on the past. The game’s themes of grief and family are omnipresent throughout the experience, and it’s through play that we begin to unravel Miriam’s past relationships with her parents and more specifically her mother.

After her parent’s divorce, the bond between Miriam and her mother becomes stronger while also becoming more prone to misplaced blame and abuse. It’s a familiar feeling that many people who are children of divorce can easily relate to. When we become adults, our relationships with both parents can easily become strained or non-existent. Alternatively, they can become close friendships with a veneer of parenthood. For Miriam, her relationship with her mother is non-existent because of how her mother put undue pressure and emotional abuse upon her shoulders. This is framed within the context of Miriam being a fantastic swimmer, with great potential and many accolades.

Despite her many accomplishments, the realities of a single mother raising a child create stressful situations that result in blame and abuse being taken out upon Miriam. Nothing was ever good enough. Through gameplay, the player begins to piece together the various threads of Miriam’s past. Most notably highlighting the happier times between her and her mother, almost always undercut by a new form of grief. Unearthing dirty photographs, putting together a replica diorama of an important awards ceremony; it is through these gameplay vignettes that Miriam begins her catharsis towards peace.

Players are able to interact with the world the game paints for us. However, the interactions are often limited in their complexity and require little active participation to move the story forward. Had the game made these gameplay moments more of a mystery or puzzle to piece together, the game could’ve become far more engaging in these moments. Although with that said, the main driving force for A Memoir Blue is its strong focus on narrative and how that narrative is both portrayed and interpreted by the player. 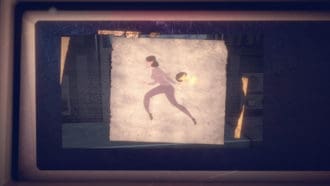 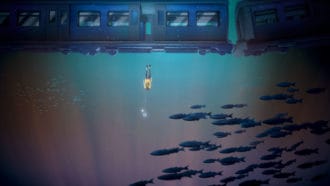 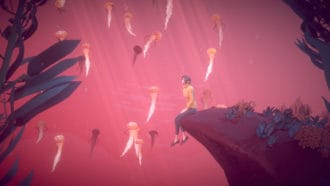 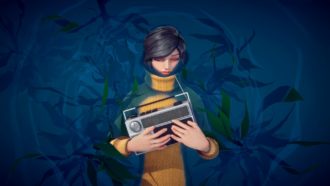 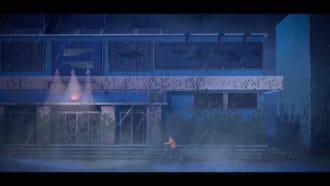 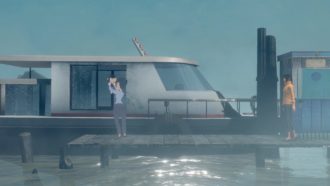 Accompanied by a beautiful musical score, the overall visual aesthetic of A Memoir Blue is mesmerising. Despite being a small team, the resulting graphical look of the game suits the game’s message perfectly. Mixed between an ocean dream and spliced together with traditional 2D animation for important story moments, the game has a unique visual consistency that works to keep your attention just by art alone.

While a lot can be said of the many strengths of the game’s visuals, its gameplay length must also be contended with. I finished my play-through of A Memoir Blue in just over an hour, and that was at a leisurely pace. Despite its length, I took no issue with the nature of the experience. I feel there is an uncalled for stigma placed against shorter video games that purely stem from a nebulous concept of value. With value being a subjective measurement of quality, I feel A Memoir Blue would find difficulty finding an audience in the premium video game space. However, launching on a subscription service such as Xbox Game Pass offers a unique opportunity for the developers to get their games in the hands of new and previously harder to reach players. With subscription services on the rise in the gaming industry, I think games such as A Memoir Blue should and can exist in today’s video game climate.

A Memoir Blue is an interesting case study for where the future of indie games may be heading within the next 5 years. While both visually striking with a seemingly simple narrative core, A Memoir Blue is able to deliver an experience that evokes emotional sympathy and combines its game concepts directly with its themes of family and estrangement. Despite being a short experience with limited opportunities for interesting gameplay scenarios, I sense this is only the beginning of an exciting style of video games.