Wii Sports, despite being simple in premise and not really a hot contender in discussions of the best games for the Wii, was nevertheless the greatest selling game on the console ever. It has sold over 82 million copies worldwide, more than double the number of the runner-up, Mario Kart Wii. It proved there was an enormous market for casual experiences that were easily shared with friends, family, and acquaintances alike. The new Nintendo Switch Sports seems to want to capitalise on that legacy, but there’s a couple of key differences between these two titles.

First, Wii Sports was a launch title for the Wii, and it was in part designed to showcase the capabilities of this brand-new motion-controlled console at a time when motion controls were still novel, so it could get away with only having a small collection of games. Secondly, it came bundled in with the console in Western countries, which helped to distribute the game and get the word out about the Wii’s fun and intuitive controls. This new title has been released under very different circumstances, and although the sports themselves still have the same enjoyable heart as the original, Nintendo Switch Sports needed to do more to stand out in today’s video game market.

Let’s get stuck into it! What are the games, and are they as fun as we remember? Nintendo Switch Sports comes with 6 games on launch, and we have gotten confirmation at Golf will be added as a free update later this year.

Volleyball is a 1-4 player team sport that is all about timing, Similar to how tennis plays. You swing your Joy-Cons up and down to mimic hitting around the ball while making sure you keep track of whether you’re spiking or setting up for your teammate. It feels a little odd though, because the game will slow time down for you in preparation to spike the ball. It’s supposed to give you a bit of time to prepare yourself, but in practice, it just confuses the timing.

Bowling is a classic from the original game, and it remains a crowd-pleaser in Switch Sports. This can be played with up to 4 players, but if you’re playing online you’ll be playing in a group of a whopping 16. You can still throw curveballs by twisting the Joy-Con in our hands to try to get those tricky shots, though doing so feels different from the original. It takes some getting used to, but soon you’ll be throwing curveballs left and right.

As a response to folks accidentally impaling their TVs with their Wiimotes when releasing Z to throw the ball, now you must keep the ZR button firmly pressed for the entire throw. It’s a small change, but it breaks the emersion a little since it feels strange not to let go of the button like you’d let go of a real bowling ball. It’s easy to get used to though, and soon you’ll forget all about it.

Bowling has an extra mode that will place various obstacles down the bowling lane, which is a fun variant. It comes in different difficulties and the obstacles are randomised, so it’s a bit different every time you play.

Badminton is a 1-2 player game, and a newcomer to Switch Sports. It’s largely similar to tennis, but the focus is on the speed and angle of your swing rather than timing. It’s less involved than Tennis,  but it’s fun if you want a fast-paced match against a single opponent. Matches can get very high speed, as opposed to Tennis, which is slowed by the bouncing of the ball and teamwork.

With that being said, given that Sports only features 6 games at launch, having one of the new games play so similar to one of the returning games seems like a wasted opportunity.

Tennis is a returning game from Wii Sports, and can be played by 1-4 people. despite this, there’s no option for a singles match: even if you’re playing 2-player, the game will assign you 2 CPUs. I suppose that’s what badminton is for, but again, badminton feels a little too similar to tennis in a game with only 6 games.

In tennis, you need to pay attention to the timing and direction of your swing to avoid hitting an out. You can also get away with swinging your Joy-Con wildly if that’s your playstyle.

Chambara is a 1-2 player game that in Wii Sports Resort was called Swordplay. Amusingly, you can choose to wield duel swords by using two Joy-Cons instead of one, leading to the best kind of chaotic energy. Otherwise, it’s largely unchanged from the original game. It’s short and sweet, and it is a good break between the sports that take longer. It’s also perhaps the sport that best demonstrates how the motion technology has improved from the days of the Wii, as your sporting equipment holds steadier and controls even more effortlessly.

Football/Soccer is the only game that uses the new optional leg strap accessory, which attaches the Joy-Con to your thigh so you can kick goals using motion controls. Right now, the accessory only works in the goal-shooting extra mode, but the game will be updated in a season or two so we can play a full game of soccer with the strap.

Soccer utilises the control stick to move around and motion controls to kick the comically oversized ball, which feels intuitive and responds well to the direction you swing in. The field is surprisingly large and can take a while to run from one end to the other, so it’s the only game that really requires any strategy between teammates in terms of who defends and who attacks. This makes it perhaps the most engaging game of the lot, especially when playing online. It has the same energy as Rocket League, with a lot of the same fun. 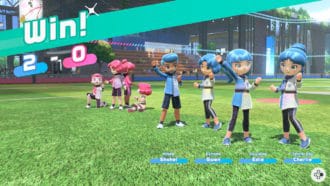 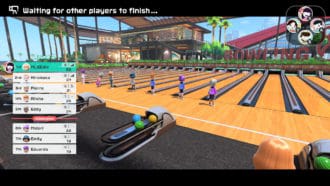 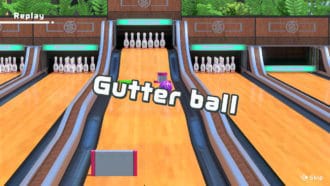 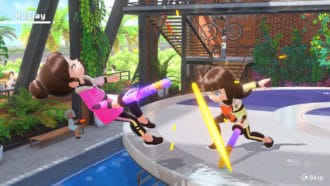 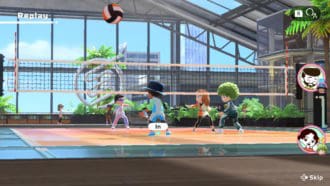 Looking at the 6 games, there are a couple of things worth noting about all of them: they are all goofy fun, which is the most important thing (and the best kind of fun). They all keep the heart of the original Wii game with their intuitive controls that are easy to learn and fun to replay. It feels satisfying to win, but it’s hard to feel sad when you lose thanks to the easygoing atmosphere. When playing online, there was rarely lag, and I only experienced it in the occasional game of soccer. The graphics are colourful and pleasing to the eye, and the music is bouncy and full of pep.

But there are some noticeable downsides too. Even with the promise of golf coming as a free update, I can’t help but be disappointed that there are only 6 games when Wii Sports Resort, which came out in 2009, started with 12. For a game that is coming out more than a decade later and halfway through the Switch’s lifetime, it’s hard not to look at it as a downgrade. There is also a lack of match options: only some of the 6 games have any at all. Bowling has its obstacle mode (but not 100-pin Bowling from the original) and soccer has a goal-kicking mode, but that’s about it when it comes to extras. The games sorely need some match settings too — I can’t see a reason why you can’t change the time limit on a soccer match or increase the best-of-three in Chamabra to a best-of-five. This especially becomes an issue when it comes to unlocking accessories by playing online.

Nintendo Switch Sports is pushing online play. That much is obvious from the starting menu, which places the global online option front and centre. Strange, since the Nintendo Sports titles have always been geared towards local multiplayer. It’s always been about having a great time with friends and family, a game that even the non-gamers in your family could enjoy. Start the game, create an avatar that looks amusingly goofy and yet passingly similar to yourself, and destroy your family at virtual tennis.

Well, that’s not how it works anymore, and while online play will be great fun for some players, for others it may spoil the game… and it’s because of the accessories.

“While online play will be great fun for some players, for others it may spoil the game.”

Upon starting the game, the customisation options for your SportsMate avatar are very limited. I would go so far as to say they are incredibly stingy. You start with no accessories at all, not even a basic pair of glasses or a hat, and only 6 hairstyles and 7 hair colours (There are no unlockable nose and mouth options either, by the way. Boo.) It’s practically impossible to make a SportMate right off the bat that looks anything like you. But the real insult is that accessories can only be unlocked by playing online. It’s not quick, either — in general, you’ll need to play up to 3 online games of any of the 6 sports before you’ll unlock one (one!) random accessory from the current selection, which gets cycled around once every week or so. With only 6 games, this gets old pretty quick.

Online play itself is pretty fun — I wasn’t expecting it to make a difference. If you get bored playing tennis against your family, surely it would still be boring playing against strangers. It surprisingly adds a lot of replay value, though not enough to make grinding for accessories much better. The pro leagues are also a nice addition to those who like competition, but they are only optional. This aspect of the game lives up to the legacy of the original games as casual experiences first and foremost. But the fact that accessories cannot be obtained during offline play does not.

What if you don’t have Nintendo Switch Online, and don’t want to pay the extra cost to get it? What if you simply don’t want to play with strangers online, or don’t have any friends with the game to play online with you? Well, Switch Sports’ solution to that is to put you into a ‘Trial Mode’ of online play, where instead of other players you will face off against insultingly easy CPU characters. So you can, technically speaking, earn accessories without paying the extra cost of a Nintendo Switch Online subscription, if you’re interested in grinding for hours against unchallenging CPUs just to get some interesting clothes for your character. Doesn’t sound like fun to me.

The problem is this: if your game is designed for casual audiences who will likely only play the game every once in a while, you cannot expect that audience to enjoy grinding through dozens of online matches before they finally find a hairstyle that looks like theirs. It should be available from the start. But if you want your audience to spend hours playing online, you need more than 6 games to keep them interested. Nintendo Switch Sports does neither, which is ultimately to the game’s detriment.

As much fun as Nintendo Switch Sports games are, it’s hard not to feel as if Nintendo didn’t exactly push the boat out on the game. 6 games might have been enough for a new game in 2006, but not these days, and not for a full-priced game. That and the lack of extra modes and options make it feel like it’s a half-game, something that should have been bundled in with Nintendo Switch Online instead of sold at full price. It’s still a fun distraction, perfect for engaging the non-gamers in your family… as long as you’ve spent enough hours unlocking some accessories first.