Wildcat Gun Machine is the valiant debut effort by Brisbane-based developer Chunkybox Games, bringing a visceral, demon-slaying bullet-hell experience. With its rad techno soundtrack and grotesque enemy designs, it has a lot going for it, however the lack of narrative context to motivate the player and shallow, limited gameplay holds it back from the excellent experience it might have been.

When you start a new game in Wildcat Gun Machine, you’re dropped right into the action. No cutscenes, no opening text crawl, no explanation whatsoever of who the mysterious eyepatch-wearing individual you’re playing is or what their motivations are. You’re just dumped into the fray and advised to shoot as many demons as you can find. The game is obviously tapping into the old DOOM ethos of “No plot? No problem!”, where the sheer catharsis of its gameplay was sufficient to keep the player going.

However, that was the early 90s where a lacking plot was often because there was literally no space on the disc to include it. I began to find Wildcat Gun Machine’s lack of interest in explaining itself kind of frustrating, as it made me less invested in pressing on to the next level if I had no idea what exactly the end goal is supposed to be. Did the protagonist invade Hell, or are they trying to escape? Are they trying to avenge or rescue someone? Is there a Big Bad Demon whose demise will save the world, or do they just have a general goal of taking down as many demons as possible? I’m not asking for a Shakespearean monologue explaining why the eldritch abominations you’re fighting are evil, but the smallest degree of context to motivate the gameplay a bit more would have gone a long way to improving the experience. 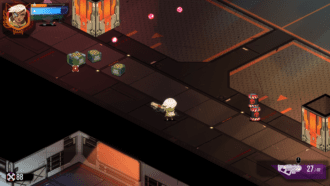 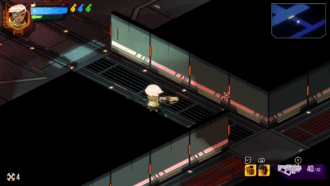 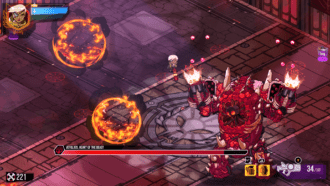 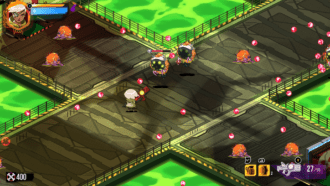 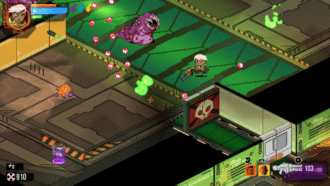 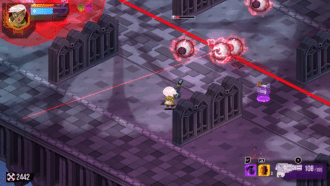 In the absence of plot, Wildcat Gun Machine at least mostly succeeds on the gameplay front. Its a top-down, isometric bullet-hell shooter where you go room to room gunning down everything that isn’t you, not unlike Enter the Gungeon. Unlike Dodge Roll’s famous roguelike shooter, however, Wildcat Gun Machine is a linear action game, where every shootout is custom-designed. The game is separated into several Acts, where you explore dungeons to fight a miniboss for a key that unlocks the next area. The player is rewarded with Bones as currency, which can be spent at checkpoints on new guns and other upgrades.

It’s unfortunately a somewhat repetitive gameplay loop; after the first Act, you don’t unlock any substantial new moves outside of new guns, and the repetitive scenery and lack of narrative make it difficult to get a sense of progress. Still, Wildcat Gun Machine doesn’t quite overstay its welcome.

“Although the weapon variety is nice, it’s also hard to appreciate given the game’s incredibly stingy weapon carry limit.”

There are over 40 different guns, ranging from Gatling guns to flamethrowers to laser beams. Although the weapon variety is nice, it’s also hard to appreciate given the game’s incredibly stingy weapon carry limit. You can carry a grand total of one special weapon and one infinite ammo sidearm at a time. You also can only swap out your loadout at checkpoints, not during fights.

The restrictive limit on your weapons leads shooting arenas to feel quite tonally similar. Every fight has basically the same strategy of “use your special weapon until you run out of ammo and need to use your pistol”.

The pacing is further killed by most arenas having between 0-1 ammo refill containers, which don’t respawn mid-fight. As such, you’re practically bound to run out and resort to chipping away at enemies with your underpowered sidearm, rather than being able to switch to another one of your main weapons. Just having the ammo pickups respawn, or rewarding pistol kills with ammo drops for your special weapon, would have done wonders for Wildcat Gun Machine’s momentum.

One feature that I would have liked to use more is Wildcat Gun Machine’s titular Gun Machine feature. The closest thing to a main goal in the game is defeating giant mechas called Gun Machines, which are possessed by demonic elder gods, and then commandeering them. By defeating enemies, you build up a Gun Machine bar which, once filled, lets you zoom around slaughtering enemies en masse in your Gun Machine with a barrage of missiles or lasers.

Unfortunately, you won’t be getting too much use out of the Gun Machine, as the bar fills way too slowly and mode lasts way too briefly to feel useful or empowering. The bar resets when you die, and doesn’t recharge at all during boss fights, meaning that you almost never get an opportunity to use it during the tougher encounters for which it would be helpful . Some way of filling up your Gun Machine meter outside of killing enemies, like arena pickups, would have been appreciated.

On the plus side, Wildcat Gun Machine definitely excels on the visuals and audio side of things. The enemy designs are gorgeously groteque, ranging from demonic eyeballs to emaciated cyclops cyborgs to monstrous piles of flesh and teeth. Many of its other visual stylings are very charming, like how your character’s extra lives are represented by ethereal cats.

In addition, Winn Murray’s pulse-pounding techno soundtrack was a blast, inducing a hypnotic rhythm through the gunfights and driving the action.

Wildcat Gun Machine has plenty of great ideas that come tantalisingly close to greatness. The general bullet hell moment-to-moment gameplay works well, propelled by its excellent soundtrack and memorable enemy and weapon designs. Unfortunately, the restrictive weapon carry limits and lack of incentives like new gameplay mechanics or plot progression turns to the game into a grind before long. Wildcat Gun Machine is far from a bad experience, but it may feel insubstantial for many bullet hell shooter veterans.