Just shy of three years ago was the release of Fire Emblem: Three Houses, the latest mainline game in Nintendo’s tactical RPG series. It’s safe to say it blew up and came with glowing reviews. Now comes somewhat of a continuation of that, with Fire Emblem Warriors: Three Hopes. It’s not the first Musou or Warriors-style game for the Fire Emblem series, with Fire Emblem Warriors releasing in 2017. While that title fizzled a little bit, not entirely taking advantage of its cast, Three Hopes does the exact opposite. With an intense focus on a familiar cast, stellar gameplay, and plenty to do, this is one for the Warriors formula books.

A country at war

Fire Emblem Warriors: Three Hopes kicks off with a bang. You are a purple-haired mercenary named Shez. Your introductory mission has you cross paths with Byleth, only this time something is not quite right. They terrifyingly glow this bright green and take you and your troupe down. They also mysteriously have the title ‘The Ashen Demon.’ This is an effective inciting incident. In this venture, you will be provided with bountiful inklings that you’ve been here before, except everything is just a little not right. All the familiar friends and faces you spent dozens and dozens of hours getting to know return, only you’re in an alternate universe.

Before long, you’re re-introduced to Dimitri, Edelgard, and Claude, the leader of the three houses at the Officers Academy. You’ll pledge allegiance with one of the three, though don’t expect an education. You’re quick to join the civil war that is tearing the country of Fódlan apart. I joined Dimitri and the Blue Lions for my first playthrough, largely because it’s the group I got to know the least in Three Houses.

I won’t spoil the beats for Three Hopes, but what is important to note here is that this very story and its cast feel like a complete answer and resolution to the faults of the original Fire Emblem Warriors. No character in my run with Dimitri and friends felt underutilized. Though the game is a little vague about each character’s motivations and all the politics of the war, it does well in presenting themes of inner conflict, bonds, and the tragedy that comes with this territory. Throughout, we see Dimitri emotionally and physically drained, watching those around him succumb to ill fates. Stubborn as he is, it’s some time before his comrades convince him this isn’t his weight to bear alone.

Also on offer are character support bonds, where activities and co-operative fighting between warriors will result in stronger bond levels and henceforth reward you with unique scenes where a pair of characters will interact. Not only does this help deepen the personality of the stacked cast, but also proves to be another instance of utilising the more recent Fire Emblem developments. Developing these bonds is far less incidental this time around, with you actively able to choose who you want to pair up on activities, rather than being restricted to placing a pair next to each other in battle.

Fire Emblem Warriors: Three Hopes has a competent story, detailing the intricacies of war. There are times early on, at least in Dimitri’s run, that the story will spend a bit of time faffing about only to accelerate at paces hard to follow. However, it’s enjoyable throughout and also provides the intrigue of finding out what on Earth is going on in this alternate timeline, full of warm, familiar faces. Just why is Byleth, Three House’s protagonist, the villain this time around? How do they play into it all? Those answers await.

I can’t yet speak for how the other routes stack up – I’ve only completed the Blue Lions campaign and half of Golden Deers’. What I will say is an excuse to spend more time with the cast is a good thing. There is plenty of that here. I’ve missed getting unbelievably hit on by Sylvain and seeing what new thing has Felix brooding this time.

Topping it all off, Shez actually makes for a wonderful Fire Emblem protagonist! They’re more or less fully voice-acted this time and the female Shez offers actual personality and a bit of spunk! More of that from here on, please. 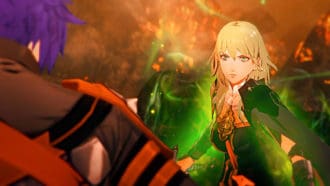 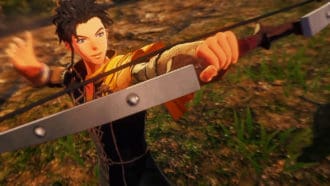 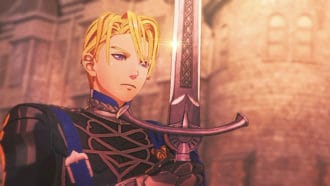 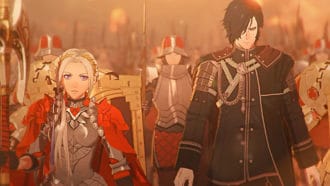 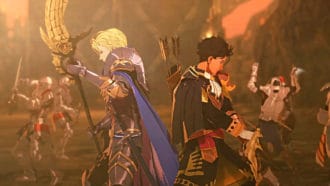 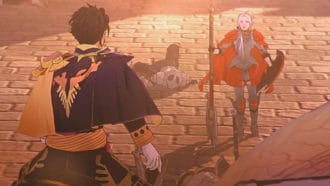 Taking foes on in the thousands

With how ambitious and detailed Musou games are growing, I was admittedly a little nervous heading into Fire Emblem Warriors: Three Hopes. Some of the more recent ventures, such as Hyrule Warriors: Age of Calamity, suffered from framerate and performance issues. Playing on a Nintendo Switch OLED, I’m pleased to report no such occurrence took place. While still limited by the Switch in terms of visual fidelity, the presentation is quite impressive. Expect plenty of particle effects that vary depending on the class. Tornados and a powerful barrage of spells make up just some of these. These are all distinguished well. A thief with a sword plays and feels different to a Myrmidon with a sword. Though I wish the moves altered from character to character to add that little extra flair.

Like other ventures prior, the core gameplay is that your hero and their crew are placed on a battlefield. What ensues is hundreds upon thousands of enemies, with you tasked to strategically command other members and yourself through this, taking advantage of different paths and channels as you complete objectives to come out on top. Before long, players will be utilising different classes and abilities on top of this, working to effectively tackle a stronghold or take down a target as efficiently as possible.

The loop of hacking and slashing through big groups, juggling them in the air as you let out the most anime-style flurry of stacks, is still as appealing as ever. Unique action abilities and alternating between your regular and strong attacks, along with your warrior special, all do well in mixing this up. I’ve never been one for fighting games or action games that have you memorise button patterns, but a great reward came from doing so in Three Hopes. I’d be met with flashy attacks and brief cinematics as I’d deliver that last crippling blow to a group or individual.

Plenty of objectives will take place within a given level, with optional ones popping up at any time. These can vary from defending or attacking an essential teammate or target, to taking over strongholds or activating a trebuchet or switch. They occur so often that you’ll want to consciously be pulling up your map and commanding an individual or pair to a specific point, before returning to manually control your character of focus.

“…this very story and its cast feel like a complete answer and resolution to the faults of the original Fire Emblem Warriors.”

These objectives alternate enough. The only one that became frustrating is the rarer level where you’ll be placed on a map obscured with fog. Your task here – locating and taking down the mage that is casting this effect – is good in theory but a bit painful in practice. An absolute pace ruiner in these missions, especially when you’re also trying to juggle completing your other given tasks.

Two important means of turning the battle’s tide in your favour are provided in Three Hopes. The protagonist Shez has this mystic ability that allows them to teleport between captured strongholds for a limited amount of times in a level. It’s encouraged you don’t act too zealously with this, but it can prove crucial if you find yourself quickly overwhelmed and far away from a target.

Within the game, you’ll also have the ability to pick some strategies that can be passively or actively applied during battle. One major instance includes the ability to convince a character from an opposing party to join your side once you defeat them, marking them as part of your group from then forward. The more minor instances include starting a battle with enemies and strongholds already half weakened, or additional A.I. support being deployed.

Coming out of dozens upon dozens of hours of play at this point, this is a firm and positive step forwards for the Warriors franchise. It’s easy to pick up and learn, combat is a blast, and progress is more tangible than ever. In-between levels you have a world map where you can slowly see the land you’re conquering as you encroach upon your main target. I can’t help but be invested with this, feeling like my steps forward actually mean something to the fictional land of Fódlan.

Oh, the things you’ll do

The encampment is where you’ll also spend a lot of time in Fire Emblem Warriors: Three Hopes. Here are yet more tangible ways your army can grow. The training grounds serve as a spot for you to level up characters, grow their class rank, and divulge from here. This is particularly exciting because it will offer different means of play. It’s most interesting and fun to discover and tool around with these classes for yourself, so I won’t detail further, but there’s plenty more at play now.

Bonding opportunities with your teammates come in the form of cooking and sharing a meal, completing chores for the encampment, or going out on expeditions. The latter of the bunch is closest to the tea time you may have seen prior in Three Houses. Correctly fight the right response to conversation points and questions and you’ll be rewarded with more and more support points. Perfect this meeting and you’ll get to enter a unique photo mode, capturing all your pretty teammates’ good angles as they sparkle. Just maybe don’t expect to weirdly touch them again this time. They removed that.

Shopfronts, a tactics class, armourers, blacksmiths, and purchasing of battalions all will also do well in strengthening yourself up for battle and getting the best gear. Gifts are also purchasable here at these fronts, key in also developing those bonds as you shove the pretty things in your party members’ faces.

Rounding this out is tackling the monolithic list of in-game achievements to complete, along with providing resources to the Facilities Master. This will see your facilities slightly change and grow in appearance, but more noticeably aid in min-maxing the cost of gold to perform literally any task at any shop front, or the effectiveness of levelling up in any specialities. 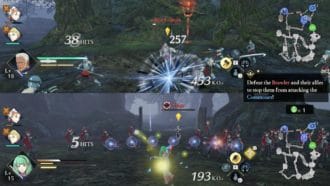 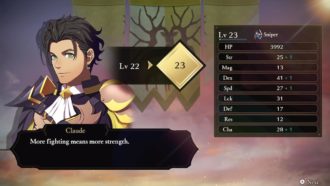 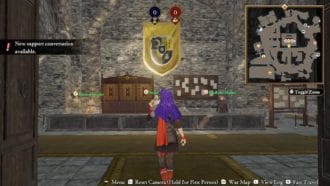 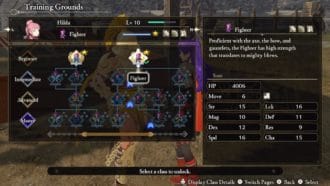 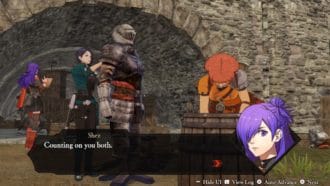 The pessimist may see all of Three Hope’s additional content as a means to balloon up your time in-game, but when it comes to the Warriors series, that’s just the name of the game. Taking advantage of every way to grow stronger is rewarding to those that love to win and love seeing those numbers go up. You’ll find so much to do and unlock throughout your initial and subsequent runs throughout Fire Emblem Warriors: Three Hopes. You’re never short of activities and things to pass the time.

Fire Emblem Warriors: Three Hopes shines bright in the long lineage of games in the Musou formula. Miles better than its predecessor, this is one of the smoothest Warriors-style games yet. Barring a rare example, its mission and gameplay loop holds up. The narrative does the best it can in a genre not particularly known for stellar stories, but will still remain a little oddly paced from time to time. Provided is a joyous occasion to revisit some treasured familiar faces and engage in riotous combat and a smooth experience not too barred down by menus. If the series continues on this trajectory, it’s all smooth sailing ahead. For Fódlan!