Gordian Quest is a deckbuilding roleplaying game developed by Mixed Realms. It sees you play as an adventuring character in a fantasy world where humans are under threat from mysterious undead forces. The game comes with a campaign mode, a realm mode, and a skirmish mode, with ten heroes to choose from as your player character.

One of the first things that stands out when booting up Gordian Quest is the graphics. Reminiscent of traditional French comics and Dungeons and Dragons adventure books—heroes, NPCs, and enemy characters are drawn with plenty of colour, flair, and detail. It’s clear that Gordian Quest has taken a lot of inspiration from classic games like Ultima and Dungeons and Dragons, and the game’s visuals nicely complement its story lore and fantasy setting. In true D&D fashion, Gordian Quest sees you playing as an adventurer who one day stumbles across the city of Silverkeep. After entering the Silverkeep Garrison and speaking to the city’s head of the military, Captain Rodrick, you discover that Silverkeep has been plagued by undead zombie attacks for quite some time. After helping Captain Rodrick’s forces in battle, you decide to stay put and help him investigate the underlying cause of the undead attacks.

From there, Gordian Quest’s story is divided into five acts. Each act comes with a dedicated map to explore, as well as a base that you can return to rest, buy supplies, upgrade weapons, and receive quests from NPCs. Like Monster Train or Roguebook, the map consists of a network of nodes that you can travel to, with each node representing either a combat event, an exploration event, a resting point or shrine, or a story event. On top of this, the map comes with nodes known as waypoints. Once you’ve unlocked them, waypoints function as fast travel points, allowing you to travel between different map regions easily.

Like plenty of other games in the deckbuilding genre, the main focus of Gordian Quest is combat. Players who are familiar with titles like Griftlands or Slay the Spire will not find anything surprising on the Gordian Quest battlefield: every turn, you get a set number of action and strategy points that allow you to move characters or play offensive or defensive cards at a cost. Plenty of cards come with unique effects like poison, shock, bleed, or burn damage that can stack over time. Just like in Banner of Ruin, the battlefield is represented by a grid, with your units and enemy units facing off in battle in opposing rows. Depending on the kind of characters in your party, having them in certain rows can have both pros and cons: a character like Alphonse, who relies on stealth, can do a lot of bonus damage if attacking from the back row.

Depending on your enemies, it might be difficult for your character to target enemy units when they are too many rows removed from yours. Added to this, the nature of the terrain in battle can vary too: some rows come with ‘muddy ground,’ for example, meaning that you’ll pay a higher movement cost if you want to move units across these rows. This, together with the game’s variety of enemies, heroes, and equippable weapons and armour, make combat varied and fun.

This in-game variety is further bolstered by Gordian Quest’s characters. Initially, you can choose one hero character to play, with the remaining nine available to be recruited throughout the story to accompany you on your journey. You can have up to two additional characters in your party and, depending on who you pick as your prime companions, you can build up different strategies and synergies around your party’s abilities. Like in tabletop roleplaying games, characters have different classes ranging from fighters to bards, and also come with three defining stats: strength, intelligence, and dexterity. These stats do not only determine what skills you can use on the battlefield and which cards are available for upgrading; it also allows you to equip your party with weapons, armour, and consumable items you find along the way. Some items grant bonuses to either strength, dexterity, or agility, while others can grant you cards in battle or give you offensive or defensive bonuses. Each item also comes with a number of sockets depending on its rarity. Roughly, the rarer the item is, the more sockets it will have. Sockets can be used to enhance existing items further with runes, which in turn unlock further bonuses to a character’s primary stats. Rune are a relatively rare find and only tend to drop after meaningful battles; alternatively, they can be purchased from a merchant.

“…characters are drawn with plenty of colour, flair, and detail.”

Like in a D&D campaign or in games like Thronebreaker: The Witcher Tales, Gordian Quest features story encounters that you can discover as you explore the map. Usually, these events consist of a story scene where your party is faced with a choice, often involving an ability check. Just like in D&D, you’ll roll a d20 for each character to see whether they can pass the check. Depending on their individual stats and skills, they may have modifiers that can make an ability check either easier or more difficult. If you fail an ability check, an exhaustion card will be added to your card decks. These cards have no ability whatsoever and will just add unnecessary clutter to your hand and deck.

With mechanics like this, it’s easy to see that Gordian Quest is about more than cards. In addition to story encounters, the game comes with gambling tokens and exploration events. Gambling tokens can be collected as quest and battle rewards and, once you have amassed enough of them, they can be redeemed with merchants for legendary gear. Exploration events function as small minigames, where you’ll chart a path using markers on a map. A map can represent places like basements or dungeons and include randomly generated symbols. The trick is to use your markers strategically to overlap with as many symbols as possible. Every time you overlap with a symbol – this can be a treasure chest, a castle tower, or something else – you’ll find loot which is yours to keep. 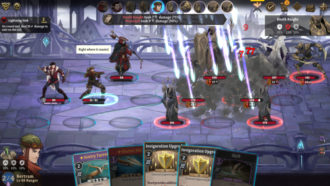 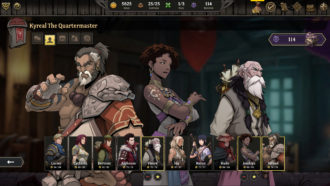 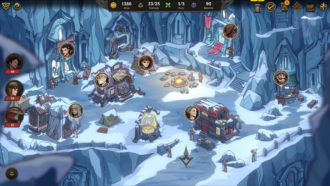 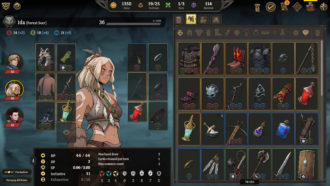 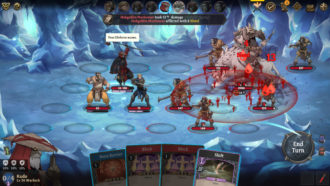 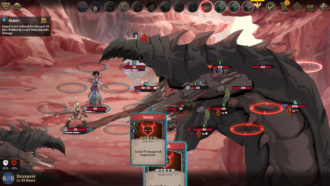 You’ll need every bit of loot you can get your hands on while exploring the map. While weapons, gold, or armour are all useful, supplies are by far the most coveted resource. Moving across the map uses up supplies. You’ll only be able to carry a limited number of supplies at a time, so rationing them wisely is key. At times, you come across resting points where you’ll find a camping setup similar to Darkest Dungeon; spending time at a resting point will give you a few hours to pass. Each hero has camping skills and, depending on the complexity of the skill, will use up several hours. Some skills focus on healing allies, others can grant your party bonuses for future battles, and some allow you to upgrade cards and weapons.

While the variety of minigames, merchants, and exploration is enjoyable, Gordian Quest is unwieldy. It’s clear that the Gordian Quest developers took a lot of inspiration from other roguelike deckbuilders and tried to implement as many interesting features as possible. However, the end result is that the game feels bloated; it’s not always clear where to focus your energy as a player. The array of features pulls the focus away from Gordian Quest’s story, which should be of the most exciting aspects. Added to this, the combat difficulty varies wildly, too; often it’s easy to breeze through the initial acts, only to be suddenly faced with significantly more complex enemies out of the blue. This makes the core gameplay inconsistent and frustrating, especially when you find yourself wading through minigames and story events when all you want to do is get back to the main quest.

That said, overall Gordian Quest is still an enjoyable game even though the designers have bitten off more than they can chew. If you’re a fan of deckbuilding and roguelike games and are looking for a game with good replayability value and plenty of card combat action, Gordian Quest will be a solid fit for you.

With inspirations like Ultima, Dungeons and Dragons, and other deckbuilding and roguelike titles, Gordian Quest will feel familiar to any card game fan. However, if you’re a seasoned deckbuilder looking for a hardcore strategic gameplay experience, be warned: the in-game difficulty can vary wildly from battle to battle, and at times combat feels a tad too easy. On top of this, Gordian Quest’s extra features make the overall gameplay experience a little unwieldy. With that said, if you enjoy a casual card game and are keen for some variety, Gordian Quest will likely keep you entertained with a range of enemies to defeat and story maps to explore.