Scathe is a fast-paced co-op-focused bullet hell FPS, where you as the titular protagonist must explore a hellish maze and mow down demons by the hundreds. Although the concept of a co-op, bullet-hell take on DOOM is one that certainly has merit, Scathe’s execution of said concept leaves something to be desired.

It’s a fine enough set-up for this sort of experience. I just wish that the opening cutscene and the running commentary by the Divine Creator and Sacrilege did more to guide the player on what they’re actually supposed to be doing. The game dumps you at the maze entrance with only an underpowered starting weapon, multiple paths to take with little indication of which is the “correct” one and a vague notion of where the game wants you to go.

I spent hours in Scathe feeling disoriented and unsure if I was actually progressing and doing what the game wanted me to do. Having the general locations of the bosses highlighted on the map, or starting the game off more linearly before branching out like in Dark Souls might have done wonders to aid the player in building their arsenal and making initial progress. 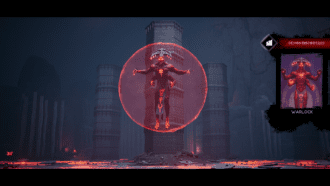 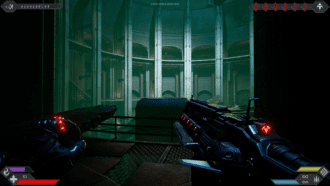 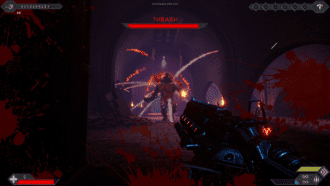 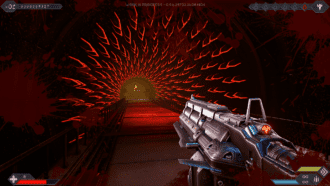 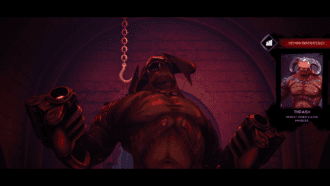 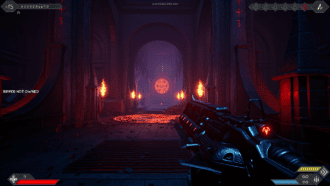 “Enemies and hazards literally spawn out of thin air, unheralded by any kind of particle effect or clear spawn point, resulting in many cheap-feeling deaths…”

Regarding the gameplay itself, Scathe leans hard on its co-op bullet hell aspirations. Enemies and projectiles flood the screen, with little consideration or alteration depending on whether you’re taking them on solo or with friends.

Enemies and hazards literally spawn out of thin air, unheralded by any kind of particle effect or clear spawn point, resulting in many cheap-feeling deaths where traps and enemy mobs that I couldn’t have reasonably prepared for outside of outright clairvoyance would whittle down my health and chew through my lives.

Scathe also highlights why most games with bullet hell elements are 2D or isometric in their perspectives. If the field is going to be filled with enemy projectiles, with learning their patterns and how to avoid them being a key gameplay focus, then it needs to be really clear where the player is in the space and how to get them out of the danger zone. In a 2D or isometric game, this isn’t a problem as you can clearly see where the player character is in relation to the enemy projectiles. In a first-person shooter, however, your character’s body is a vague space behind and around the camera, and your viewpoint is restricted to right in front of you, leading to it being very hard to avoid many of the game’s traps and attacks considering the waves of enemies and attacks it throws at you.

The unfair level of difficulty would be acceptable if it were easier to recover health or reattempt challenges; for instance, rewarding killing enemies with health pickups would encourage the player to keep on the offensive and throw themselves at the hordes rather than play as cautiously as possible. Unfortunately, killing enemies only restores your magic meter, and health and ammo pickups are only from static and non-respawning points in the map. This is in addition to a restrictive lives system, meaning that a substantial amount of progress is lost if you accumulate enough failures in a row. You can find extra lives hidden throughout stages, however the game places many of them next to bottomless pits or near lava, leading to the new life being immediately lost to a poorly-judged jump towards safe ground.

As a result, I found myself trying to avoid enemy engagement as much as possible just to minimise the amount of resources expended before the next boss. On that note, the game also suffers from the same issue Wildcat Gun Machine had, where ammo pickups in boss arenas would not respawn. This led to slow-paced fights where I would be reduced to whittling down their health with my infinite-ammo sidearm rather than making use of my more enjoyable weapons.

Scathe’s level design could also stand to be a bit clearer. There are elements to the stages that I quite enjoyed; many areas have buttons you can shoot to toggle platforms, and there is some verticality to many of the areas, giving tactical advantage to finding higher ground.

That said, actually navigating them to find the next area can be tricky, as the game lacks a mini-map screen or clear markers to signal where the exits to each area are. There is a map screen, but its minimalist presentation only gives an idea of how each area connects to one another rather than what each area actually looks like.

Something else Scathe has going in its favour is the offensive tools at Scathe’s disposal. Scathe has a variety of weapons and spells to make use of. These include guns like shotguns, crossbows and lightning beams and magic powers including healing, buffing your squad, crowd control and destroying everything on-screen. Weapons even have alternate firing modes, doubling their utility. This works even better in co-op, where players can split up and combine spells to synergise with one another.

Unfortunately, the sprawling design of Scathe’s levels works against it. Instead of starting out with a handful of weapons and spells to upgrade and expand on as you go, you start with just a single gun, and everything else is hidden throughout the maze. This makes the early stages of Scathe feel particularly unrewarding, especially if you are playing solo, as your starting weapon feels underequipped for the hordes you are pitted against. As it is unclear where weapons and spells are aside from an icon on the map indicating that one can be found in a particular area, building up your arsenal to expand your tactical options takes far too long for a game building itself around cathartic, over-the-top action.

I appreciate what Scathe was clearly aspiring to be, but it doesn’t reach those aspirations. Its sprawling, directionless levels were no substitute for a more tailored experience with a difficulty curve and intended order of obtaining new weapons and spells. Flooding the stages with enemies and hazards that appear out of thin air felt unfair more often than not, and the lives system and scarce health pick-ups only slowed down what is intended to be a fast-paced experience. If you enjoy DOOM and FPS’s inspired by it and want to play it co-op with your friends, there is some enjoyment to be had, but there are better-designed co-op shooters on the market that are more deserving your time.