Soulstice Review – Two souls are better than one

Soulstice is a new spectacle-filled action game by Reply Game Studios, filled with challenging encounters and intricate combat system. Drawing clear inspiration from the Devil May Cry and Bayonetta franchises, Soulstice stands up enough on the merits of its worldbuilding and combat to distinguish itself from those titles and is definitely worth playing for action game fans.

In Soulstice, you play as Briar, a taciturn member of the Order of the Ashen Knights and Lute, her ghostly younger sister who has been bound to her soul. The sisters are tasked by the Order to investigate a gigantic tear in the sky above the Sacred City of Ilden, which has allowed deadly monsters known as the Spawn of Chaos to massacre the population. Needless to say, the operation goes awry not long in, and Briar and Lute must voyage towards the tear while investigating a mysterious conspiracy within the Order involving their own pasts.

Much of what I found compelling about Soulstice’s narrative was contained in the interplay between its leads, Briar and Lute. As siblings literally joined at the soul, their bond and the extent to which it develops as new revelations are uncovered was interesting and kept me hooked for the next development. As the gameplay involves using Lute’s ranged attacks and aura abilities in conjunction with Briar’s weapons, Lute also stands out as a video game sidekick who also feels mechanically helpful and important, which can’t be said of all of them out there.

There is a focus on worldbuilding in Soulstice, with detailed mythology to spare. A handy codex in the pause screen also makes it more manageable to follow if you don’t explore every dialogue option. The actual plot feels somewhat small-scale in both setting and stakes, taking place in only one of the three major cities established in its backstory, and leaving plenty of plot threads open to be explored in sequels later on. 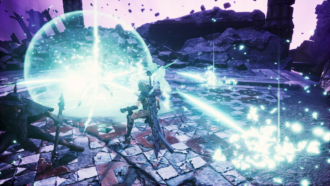 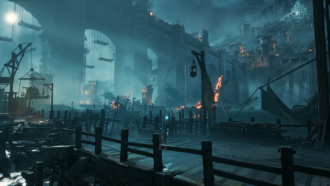 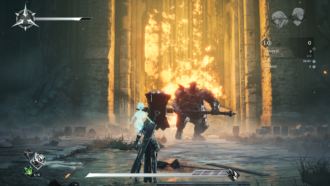 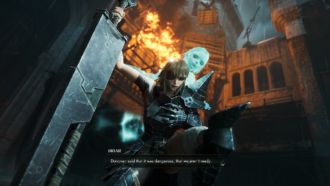 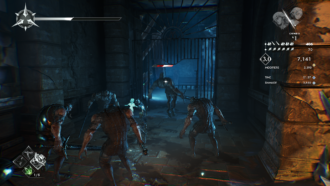 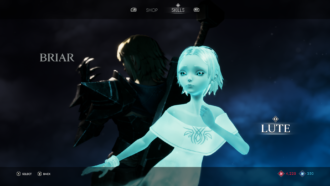 In terms of the combat and general gameplay in Soulstice, it will probably feel quite familiar if you have played the Devil May Cry or Bayonetta games. As in those, progress is split up into distinct chapters, where you explore through a mostly linear path, encountering combat and light platforming challenges and uncovering secrets. You are graded on your damage output, combo variety and efficiency at the end of each combat encounter and chapter, with high grades resulting in bonus rewards. In addition, various sub-weapons can be unlocked and upgraded, each of which is suitable for a different class of enemy.

Where it diverges from this template are Lute’s aura abilities, where Briar’s ethereal sister can summon red or blue auras which enable Briar to damage enemies and objects with that colouration. An additional layer of strategy is added in swapping between the auras on the fly without keeping them on for too long, as that causes them to overload and Lute’s powers to be disabled for a short time. With a short quick-time-event, Lute can also stun or counter some enemy types before they can hit you. Keeping up a high Unity score by maintaining a good combo variety and avoiding damage allows the player to unleash a Rapture mode, where you are invincible and hyper-powerful for a few seconds, which always felt satisfying.

“The combat in Soulstice works quite well, adding complexity without feeling unapproachable.”

The combat in Soulstice works quite well, adding complexity without feeling unapproachable. You can unlock a variety of combos for your main sword and eight sub-weapons, most of which share button inputs, ensuring players don’t need to memorize complicated combo sequences. The process of using Lute to summon auras and counter enemy attacks is also straightforward and complimented Briar’s hack-and-slash gameplay effectively.

If the gameplay in Soulstice has any bugbears, it can be found in the awkward and stiff camera that it also inherited from Devil May Cry and Bayonetta. Exploring from room to room, the camera is often fixed, and will swap perspectives between rooms. This causes you to abruptly change your direction despite holding down the same movement direction on the analogue stick. Although the camera can be manipulated to a greater degree in combat, most of the combat arenas against normal enemies are in enclosed spaces, and the camera will often swerve towards walls or focus on the biggest foe at the expense of the others. This makes it difficult to get a sense of how many enemies are left to fight and often caused me to be blindsided by enemies hiding off-camera.

Furthermore, I found switching targets to be more trouble than it needed to be. Enemies often spawn mid-battle, and the aura system forces the player to focus on enemies weak to the particular aura in play. However, switching between targets with the right analogue stick rarely seemed to switch immediately to the actual target I was trying to aim at, potentially causing me to waste an attack that bounced off a currently-invulnerable opponent.

In addition to the regular enemies, there are the bosses, which are all suitably climactic and varied in their design. I appreciated that nearly all of them had some sort of gimmick that made them unique and set them apart from the regular combat encounters, whether that was facing two bosses at once tag-teaming you, or a boss which breaks up its combat for platforming sequences.

Although I generally enjoyed the boss fights in Soulstice, I disliked how many of the bosses went through mandatory periods of invincibility, or brought up regenerating shields that needed to be taken down over and over. Particularly with some of the game’s later fights, having to wait around for the boss to be vulnerable, or hack away at their shield just to make a small dent in their health bar, just felt like padding the length of those fights, and made a game over garment-rendingly frustrating due to the lack of mid-fight checkpoints.

I also must make note of the often-gorgeous visuals in Soulstice. The city of Ilden is nicely realized, even if most of the game takes place in the same snowy city. This draws attention to how weird it was that Briar’s armour leaves one of her arms and legs exposed to the elements. I also appreciated the enemy and boss designs, which looked suitably unnerving and distinct enough to recognize at a glance. The memory sequences where you play as Lute and delve into Briar’s memories were also amazing and served as some of the most memorable and vivid sequences in the game, aided by Stephanie Joosten’s emotional performance as both sisters.

Once you have finished the game, a Chapter Select option makes it simple to revisit previous chapters to hunt for missed upgrades or secret combat challenges. There are also 5 different difficulty options, with the second lowest being advertised as the “normal” difficulty setting. For players who have beaten the game and seek a greater challenge, there is a decent amount of additional content to tackle following the end credits.

Soulstice is a truly great action game, which despite taking many cues from stylish action titles of the past, carves out enough of an identity to stand out on its own. The system of controlling both sisters and maintaining auras while slashing through foes is intuitive and simple to master. Although the plot leaves many threads hanging, the development of the central sibling relationship and setting were enough to draw me into Soulstice’s world and want to see more. If you’re a fan of challenging action games and can forgive a slightly annoying camera, Soulstice is definitely worth checking out.