The Voice of Cards series has seen a release schedule unlike any other. In October of last year, it all began with The Isle Dragon Roars. Just this last February, we had The Forsaken Maiden. Now just eleven months after the card-based adventure series’ inception, we have a third entry already with The Beasts of Burden. With another full title being turned around in such a short time, this newest entry thankfully remains a good, admirable and fun journey… even if franchise fatigue is already setting in.

The Voice of Cards: Beasts of Burden follows a young female adventurer by the name of your choosing. Growing up in a subterranean village, this sheltered life is interrupted almost immediately.  A monster attack destroys the town, decimating the residents and her mother among them. It’s a brooding boy by the name of L’gol that takes our hero by the hand and aids their escape, embarking on a journey to the surface in the search of the stars, a new life and revenge.

Across the experience, you’ll meet many faces. Two additional party members are found in a scholar named Pulche and an ex-circus troupe member called Tralis. This particular adventure is a lot looser in narrative beats and direction compared to its counterparts, instead opting to tell themes and world-building in more detail. It’s a real fish out of water story, as you watch your hero and L’gol become more accustomed to life above the surface. You’ll help band a circus troupe (before being joined by Tralis) back together, explore ancient ruins, aid a dying community and more in your time.

Beasts of Burden drags its feet a bit in telling its story. Many quests will have you travelling back and forth to places you’ve already been. Dungeons you explore are bigger than ever, meaning random battle encounters will be more frequent and slow your progress. That’s what my biggest bone to pick with the game is, though it’s ultimately worth it. Seeing the strong, resilient protagonist take a sworn journey to finally see the stars. Witnessing L’gol exact his much-needed revenge from those controlling his life underground early on in the story, thus having to deal with the question of how to live their life next… It’s all good and emotive stuff. I just wish it were a little more efficient in showing me those beats with less padding. 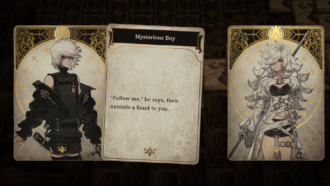 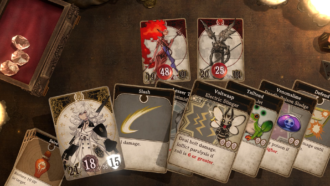 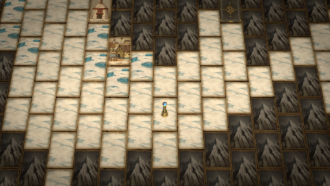 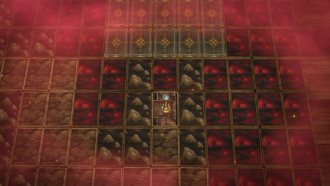 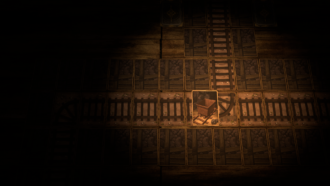 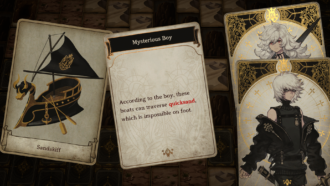 Early on in the Beasts of Burden, you learn that the protagonist has the ability to call and control the monsters in the world. This has effective narrative implications for our party, serving as the only humane bridge between the overarching world war of man versus monsters and looking to bring peace. Though this also has gameplay effects. Randomly following battles you may be able to catch a beast (if you so correctly choose from the treasure chests’ choice between three cards). These can then be used in battle, and also upgraded in effectiveness. Pet shops located around the towns you’ll visit will even offer more monster cards for sale, creating more grey areas in your growing arsenal.

While a good flavour text and narrative piece, having these monsters under your belt don’t necessarily offer anything new. Instead of every ability or attack being diegetically performed by a party member in combat, more will now instead fall to one of the four monsters that can be equipped per companion. Each monster has one ability, meaning its sole purpose is that ability. This takes a bit of the magic away, sure, but it works.

Otherwise, combat remains turn-based. Gems are earned each turn or via select spells and items, dictating different strength attacks you can perform. Further immersion in the table-top setting is provided here as whenever you’re transitioning to battle, your party members’ cards are resting upon a tidy mat in a row of four, with your opponents above you. You can plain as day read your own and enemy’s defence, health and attack. Typical delightful and tense turn-based battles occur where you’re aiming to master elements, juggling the need to heal, buff your team and attack in one turn. Many late battles played out with me escaping by the skin of my teeth, ensuring I output just that little bit more damage than my enemies were healing and also outputting.

For added measure, depending on the type of attack, the cards will dance and fly around the screen as they harm their opponents. Cast a sealing spell and you’ll see that the relevant card is bound and no longer able to cast spells. Use a dragon’s flying wind attack and they’ll fly with powerful force through an enemy. It’s a stylish, delicate and nice touch that’s remained in all the Voice of Cards, and adds just that little bit extra to spice up the many fights you’ll find yourself in.

“…It’s all emotive and good stuff.”

Like the Voice of Cards games prior, Beasts of Burden is an experience all about telling a story akin to a tabletop adventure. There’s a game master (voiced by a woman this time, a welcome addition) eloquently running you through the world and the decisions you make. More or less every asset you see is a card. The cast, the objects and the environment. Move your little pawn piece about the overworld when exploring and you’ll see cards flip over to reveal more of the terrain, or hidden goodies such as treasure chests.

Environments too feel fresh in Beasts of Burden. A large part of your journey sees a dreary and testing trek across a sandy desert. Later on, players will visit snow-drenched mountaintops, a haunting town surrounded by a lake of fire and, in the most enticing late tonal shift, a very steampunk setting in the final dungeon. Complimenting all of this is once more the brilliant soundtrack work from Music Director Keiichi Okabe (NieR, Drakengard). I don’t know how they manage to always nail a varied fantasy soundtrack, bursting with themes that are triumphant and inquisitive in nature, while also sounding like old Celtic. Still, they do it every time and once more, I’m floored.

Character design is similarly striking. A majority of the cast have long, messy white hair. A lot of emphasis is put on belts. So much so you’d be remiss if you thought this was a game that had its art done by Nomura. No, it’s again done by Character Designer Kimihiko Fujisaka. Interesting blends of typically fantasy attire are reworked and mixed with a little bit of the unique 2000s edgy wear. Then there are the fantasy creatures, spanning from monolithic primal beasts spouting flames, to fairies, dragons, gargoyles and the likes. Combine that with the creative direction from Yoko Taro and you’ve more or less got a dream team in world and design. That’s always been the focal point of the Voice of Cards series: really honing in on each of the key designers’ strengths.

I spent about 18 hours with Voice of Cards: The Beasts of Burden. That time was spent adventuring, battling, trading and even engaging in the universe’s tabletop game at the Game Parlor (an engaging numbers game affair of battling cards to have the better deck). Those that have that completionist part of their brain will find a good time doing just that and will want to scour every inch, uncovering and learning every card. Still, it’s all stuff I’ve done two times already in the past year. A tinge of series fatigue was there for me, but never enough to ruin the experience.

If they are to continue the greater Voice of Cards name, I have some hesitations. Square Enix and developer Alim Co. have a good thing going here with the formula. However, a longer reprieve between titles and even further expansion of ideas and mechanics would only serve as a benefit.

Three games down in quick succession, Voice of Cards: The Beasts of Burden manages to mostly avoid that infamous and known series fatigue. That’s largely thanks to yet another compelling fantasy story and enchanting immersion of a tabletop campaign journey. It’s in fact my favourite story of the trilogy, complete with a new and welcome mechanic that is monster collecting. It just is ever so slightly barred from being great due to more obvious padding and traipsing around until it reaches its wondrous conclusion. Regardless, we have another good entry in this weird little Square Enix series. That voice inviting you to play cards? Trust it. It’s as enjoyable as ever.