Dragon Ball: The Breakers Review – The Evil Zed by Daylight

My fear is rising, it’s overflowing! DRAGON BALL: The Breakers has invaded our fair planet with promises of terror and destruction, and we need you and your fellow players to fend off these invaders with the power of… wait, what do you mean you aren’t playing as Goku this time!?

Oh yes, just to throw a lovely new wrench into the classic formula for these titles, DRAGON BALL: The Breakers sees you primarily playing as a regular civilian who even Raditz would laugh at, trying desperately to escape the clutches of a classic Dragon Ball villain with all the strength you wish you had. So what we have here is another 2 in 1 style game, where you’re either the frightened or the frightener, à la my Evil Dead review back in May. Let’s take a gander at what it’s like to have a power level in the single digits.

DRAGON BALL: The Breakers is an all-multiplayer game, where you either take on the role of surviving humans, tasked with trying to escape and/or purify the corrupted timeline you find yourself stuck in, or a villain, hunting down said humans and trying to put the fear of Kami into them. Both sides can be a lot of fun in their own ways, so let’s Break it down a bit!

Androids experience fear? Big deal, so do I

If you’re a civilian, the main goal is to escape/survive, and there’s a few ways to accomplish this. You and your band of teammates are required to find parts for the Super Time Machine, a device that will instantly expel the villain from that timeline once completed. There’s also a number of secondary objectives along the way that will help get you to that elusive end goal, such as hunting around for useful items (including the fabled Dragon Balls) and saving NPCs.

The real clincher though is the change energy, which will temporarily, very temporarily if you aren’t careful, allow you to borrow the form and techniques of iconic Dragon Ball characters. Now yes, that does mean you can fly around for a short while as a Vegeta stand-in and fire off ki-blasts, but do not go thinking you’re suddenly a match for the likes of Cell, because there’s 7 of you for a reason. The name of the game here is co-ordination and co-operation; if someone is attacking the villain, try to back them up, and if someone gets downed, do what you can to save them, but don’t go playing hero willy nilly… it will NOT end well.

Survivor gameplay can go from eerily quiet to breakneck pace in mere moments, as you’re constantly needing to keep an eye on your surroundings whilst also trying to find resources and contribute to the larger goals. Not keeping a good eye out for a Frieza overhead is a sure way to getting blown to space dust, and as terrifying as this can be, it’s honestly a real blast, if you’ll pardon the pun. Yes you’re mostly helpless, but in those rare moments where you get to turn the tide you end up feeling all the more glorious for it! Power levels are bull!

A power level of 5? Ain’t nobody got time for that!

Now on the other side of the coin we have a more classic experience, with a more intimidating twist. Ready to hunt some puny Earthlings? Frieza, Cell and Buu are your more typical Dragon Ball affair, able to fly and blast buildings to pieces with a fart, but now things are a little more one-sided most of the time. Instead of having a filthy Saiyan front and center and constantly screaming, you’ll need to scour the level for the human players so you can absorb their power before they can complete their objectives, making yourself more powerful and progressing through greater forms in the process. “Sorry to keep you waiting” indeed! You may need longer than 5 minutes to wipe everyone out though depending on how well the team gels; remember, you’re strong but not invincible!

Being a Raider is a power trip to be sure, but victory is hardly being handed to you just like that. You’ll need to keep both eyes open as you seek out the other players, and be sure to attack at the right moments. With enough practice you can become truly diabolical towards the human side, which is extremely entertaining to pull off, but if you let them gain enough ground then you may be sent home empty-handed (and minus immortality).

To keep things fresh both the Raiders and the humans can gain experience points in order to power up various abilities and tools as you play. For the humans you can focus on high maneuverability with the likes of the Flying Nimbus, or perhaps be more aggressive and charge at the Raider directly with a kaioken. Raiders meanwhile can power up their moves and passive abilities, such as making it easier to detect nearby players or shortening the cooldown for their favourite attack. It isn’t the deepest system, but it helps add to a sense of progression that really gives the game some much needed replay value. It’s all training!

Presentation-wise, there’s a lot to say, and sadly not all of it is good. The game is fun, don’t get me wrong, but there are some issues present that really need to be addressed. Let’s start with the good: The music and graphics are on point! Each set the mood perfectly well, and while the game is set to basically an excuse plot, it leads to maps that are packed to the brim with detail and variety, sure to catch the eye of those familiar with the series (and really, who hasn’t seen it at this point?).

You also have the option of both Japanese and English voices, though the game never really points this out for you; be sure to take a good look at the menus.

On that note, once you’re done with the tutorial, be sure to explore every building of the hub, because the game does not do a very good job of explaining all of your options. Every game has a learning curve, but there are a lot of details that are flat out skipped over, and you’ll be left to experiment or else flounder in your first few matches. It isn’t a nice feeling to have everyone else on the ball from minute one while you’re discovering that your character can swim.

Another rather annoying issue has to do with the matchmaking and how it’s set up. Similar titles like the aforementioned Evil Dead or Dead by Daylight allow you to enter matchmaking as either the good guys or bad guy, so when you want to play a certain style you simply queue up and wait.

Here for some reason you always default to the humans and instead can set ‘preferences,’ which in practice has meant having to play 5 or so rounds of human each time I want to play as a Raider since my Priority wasn’t high enough. The saving grace that helps save time during this process? Sometimes the game will randomly crash when I enter the pre-game lobby, but I still get credit for playing! Senzu… bean?

This not only means you get to play as the Raider way less, but it also makes completing the season pass missions way harder by extension… because yes, that’s a thing here. 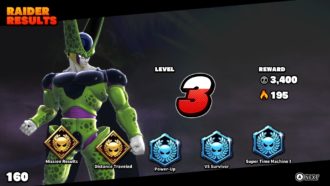 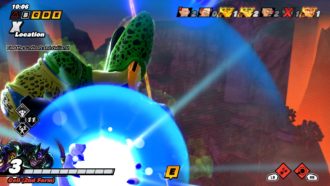 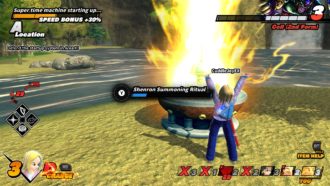 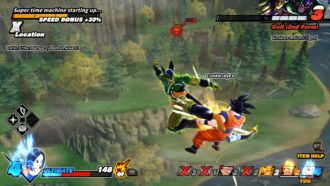 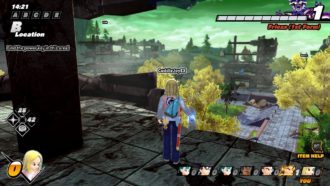 Now don’t get me wrong, I’m not instantly against the idea of a live service title, and if there’s any franchise that has enough material to draw from and make it work, Dragon Ball is certainly among them. What I will say however, is that DRAGON BALL: The Breakers seems to want to have its cake and eat it too, by having an up-front (albeit lower) cost AND a micro-transaction gacha system.

“There are a lot of details that are flat out skipped over, and you’ll be left to experiment or else flounder in your first few matches.”

You can spend real money on an in-game currency that allows access to both exclusive human clothing items and allows you to make extra change spirit summons. Not only does this introduce the dreaded FOMO, but it also creates some Pay-to-Win elements, as it means you can invest in trying to get the best quality characters to give you better odds in every match, after having spent $30 to play the game in the first place.

That being said, I’ve been having plenty of fun without spending a cent on the game, and if you can get a friend or two to join you and share codes with, you can get along just fine! Just watch out that they don’t have addictive personalities…

Truthfully, I like DRAGON BALL: The Breakers. It has some issues that I’m willing to forgive as early-release woes, but there’s a solid idea here, and if it can be built upon correctly, then there’s plenty that can be done with it in the future. With that being said though, I can’t comfortably call it a must-play with it’s gacha mechanics and performance hiccups. If those are toned down and the patches continue to improve the experience, then feel free to fly on in; good luck getting to play as a Raider though!

DRAGON BALL: The Breakers is a good idea held back by Pay-to-Win practices and outdated design decisions. While the game could have a bright future ahead of it, it has a long way to go before it can be considered a truly great title, and really ought to sort out it’s current issues before the developers look ahead to Seasons 2 and beyond. The fundamentals are there, and the gameplay is solid; if these can be polished and modernised, then Breakers would easily go from a niche oddity to a raging blast.