Spawned from the mind of Rick and Morty co-creator Justin Roiland, High on Life is a decent first-person shooter whose writing and sense of humour will likely prevent it from appealing to everyone. There is quite a lot to like about it, from fun boss designs to imaginative worlds, but it’s safe to say, if you don’t enjoy the semi-improvisational and often puerile humour of Rick and Morty, then it is unlikely that 6-8 hours of High on Life will change your mind.

After a completely superfluous character creation screen, High on Life starts with a bang, with the alien G3 Cartel invading Earth and capturing humanity to use as drugs. After you find a talking alien pistol called Kenny, you and your sister Lizzie escape to the alien metropolis of Blim City to find famed bounty hunter Gene Zaroothian to assist you in taking down the G3’s leadership and save humanity.

High on Life maintains the same naturalistic, semi-improvisational cadence to its dialogue as Rick and Morty, where characters frequently stammer, interrupt each other and lose their trains of thought. It leads to a quirky and fun juxtaposition which contrasts the vibrant alien worlds and NPCs that you encounter. However, there is also an argument that this works a lot better in a 22 minute animated TV show than a multi-hour video game, as cutscenes often drag on as characters berate each other, repeat things they have already stated and take way too long to convey points. The frequent interludes to Lizzie and Gene arguing about Lizzie’s love life between missions are repeat offenders on this count.

The game did often make me laugh, particularly when it parodied common FPS and video game tropes. However, it just as often made me cringe when it dwelled way too long on gags focused around gross-out humour, and the lack of any ability to skip or fast-forward through dialogue means you have no choice but to endure it. If you’re a fan of Justin Roiland’s other works, then you will know what to expect, but High on Life probably won’t change your mind if you’re not already won over. 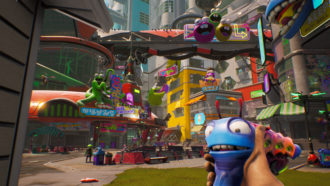 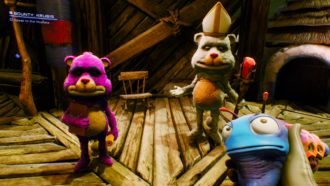 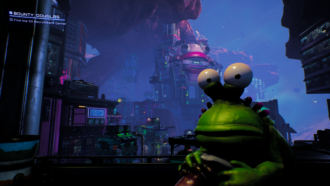 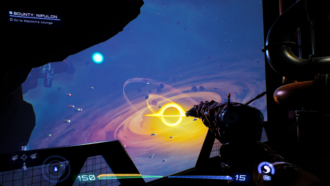 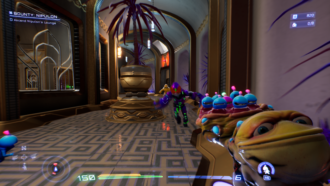 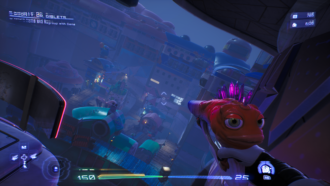 As a shooter, High on Life doesn’t exactly reinvent the wheel, but accomplishes what it needs to. In addition to four main guns (all of whom have their own dialogue and personalities), you also get some nice mobility options to get you across the battlefield in your gunfights against the G3, as well as minor platforming challenges, such as a jetpack and grappling hook. Each gun also comes equipped with alternate firing modes which aid in some of the game’s puzzles. Resource management is kept simple, with regenerating health and each gun having unlimited ammo.

“Despite its fairly brisk runtime, it still felt like High on Life was padding for time in the game’s second half.”

Unfortunately, High on Life overall is a fairly static and repetitive experience. Once you get your four guns, that’s basically it, save for minor upgrades which can be bought between missions. There are six main bounties to hunt, but the latter three bounties reside on the same three planets that the first three are on, leading to the game’s second half feeling much like a repeat of the first.

Even the enemies start to blend together; you will have encountered nearly every enemy type by the game’s halfway mark, and High on Life doesn’t really have any way to escalate the difficulty curve aside from throwing more of them at you. Despite its fairly brisk length, it still felt like High on Life was padding for time in the game’s second half.

On the plus side, the bounties themselves are where High on Life shines. Each of the bosses felt memorable and had their own gimmicks to set them apart, from 9-Torg, who fills the arena with acid and requires the player to grapple hook around to stay airborne, to the Skrendel Brothers who fight as a trio. In a game struggling for variety in its main gameplay, High on Life’s bounties at least provided a fresh well of new ideas throughout the experience.

High on Life also succeeds on its visuals. Taking the surreal and colourful alien worlds from Rick and Morty and bringing them into the third dimension, High on Life is consistently vibrant and beautiful. The NPC and boss designs are also compellingly weird, particularly your talking arsenal who are onscreen for most of the game.

Unfortunately, at least some of the art was created by Midjourney AI, a tool which takes real artists’ works without permission to generate new content. Roiland has also stated that at least one minor role is played by an AI voice actor, another controversial tool which has been in the news lately. The ethics of these tools is still quite murky, and while the results are gorgeous, it still comes from artists who are uncredited, and may have no idea that their works have even been utilised.

I had a good time with High on Life, but I can’t promise that everyone else will. Although the basic first-person shooter gameplay is hardly a revolution in game design, its certainly more than competent and accomplishes what it needs to, even with its significant lack of variety in the game’s second half. Where High on Life is likely to be polarising is its dialogue and humour, which are prevalent enough that they are hard to ignore. If you’re looking for a decent FPS that doesn’t overstay its welcome and can accept that not every joke is likely to land, then High on Life is certainly worth checking out.