Power Chord is a deckbuilding roguelite with the look and feel of fantasy Guitar Hero. Big Blue Bubble are self-proclaimed fans of Slay the Spire, Monster Train, and Darkest Dungeon but are able to take the stage with their own rock twist to the genre.

Children of the Earth

Centuries ago, a fraction between universes allowed demons to enter Earth. Black Metal Smith Mordeth was able to close the rift with the legendary Chronocaster guitar that shredded time and space at the top of a tower. Mordeth has not been seen since and demons left behind continue to cause chaos.

A band of Earth’s mightiest musicians, each with their own unique cards and gear, must fight their way up to the tower to the only guitar powerful enough to reopen the scratch between worlds and find out what happened to Mordeth.

Power Chord isn’t sticking around for an in-depth narrative, although what it delivers is an apt background for the theme. The very minor snippets of the story that are delivered throughout each level of the tower are fun, stylised breakaways from the usual gameplay. There is not much backstory or character development to the twelve currently available characters, either. It certainly nails the tone of Guitar Hero or Brutal Legend, but don’t expect much more than a surface-level 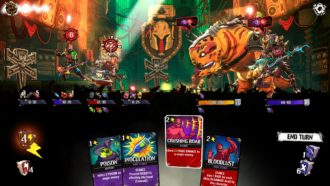 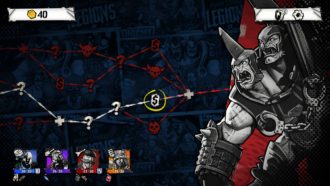 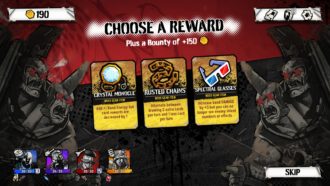 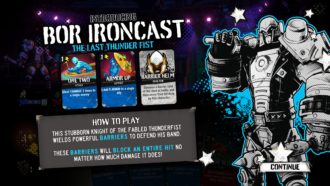 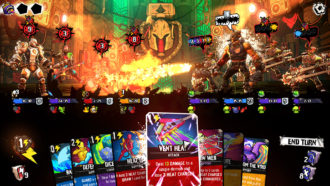 Take what you know about great deckbuilding roguelite mechanics and structure and throw in a band of characters with their own roles. The bassists specialise in debuffs and ongoing damage with poison attacks. Drummers are the tanks of the game and can add armour and barriers to band members. Guitarists are the damage dealers, stacking up power and rage multipliers for huge blows to demons. Finally, the vocalists are the support and healing role who can also apply buffs to the team. It’s a great way to customise each run with a different approach.

“Not unlike real-life rock bands, if the shredder doesn’t get enough attention the band isn’t going to work…”

All with their own unique set of cards and playstyles, the game relies on strategic builds. As the band moves up the tower, new cards can be obtained and this is where the run can fall apart with the wrong choices. Unfortunately, the weakest of the bunch are easily the bassists and the most important are the guitarists. Not unlike real-life rock bands, if the shredder doesn’t get enough attention the band isn’t going to work well together and won’t make it very far. Jokes aside, the card sets for the bassists, vocalists and drummers are interesting but just aren’t as integral compared to the damage the guitarists deal.

When a band member falls in battle, they are lost and so are their cards until they are revived at a pit stop in the tower. Even going one character down is a significant disadvantage against normal encounters, as most will be a four versus four battle and having just one less character to attack with each round is detrimental. It’s not an easy game to start out with and will require a lot of grinding of challenges, like killing 50 enemies or dealing 100 damage in one hit, to unlock the right cards and get lucky with good drops for a decent run.

Cards and gear can be purchased from the occasional shop, allowing more specific crafting of the team’s outfit. Each musician can hold only four pieces of gear at a time and there are many good and bad options out there. With the right luck and collection of gear and cards, the band will be an absolute powerhouse to reckon with. Alternatively, they’ll suffer a worse fate than Woodstock ’99.

Once defeating the final boss with 999 HP, and the true final encounter afterwards, it isn’t very replayable. Power Chord lacks a game mode with tricky modifiers or new cards like Slay the Spire’s Ascension. Besides the aforementioned challenges which are completed over dozens of runs, the gameplay and difficulty itself don’t change for an opportunity to try something new.

Despite its flaws, Power Chord’s overall gameplay is great, mindless fun. It’s just as fun to play as any other roguelite, with a few issues here and there that otherwise would make this game one of the best deckbuilders available. 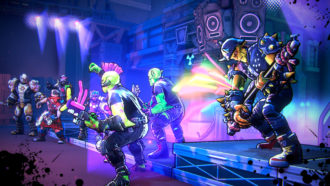 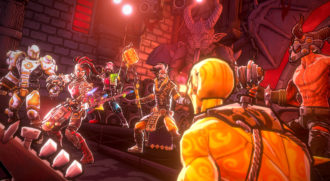 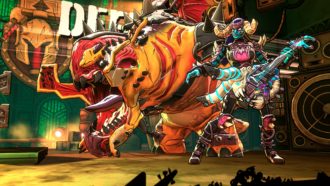 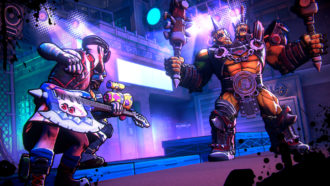 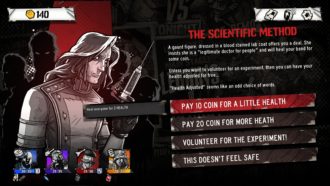 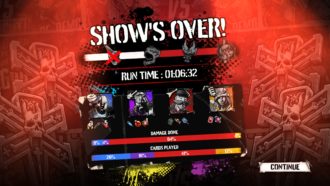 Rainbow in the dark

Power Chord’s biggest selling point is its look and feel. The game stands out more from the crowd than a hair metal band at Beyond the Gates festival. Big Blue Bubble has hammered on the kitsch PlayStation 2-era rock theme and it doesn’t feel gimmicky. Fighting demons covered in steel as a band of toughened musicians, combined with the colourful UI and artwork, makes this the most unique-looking roguelite there is.

Ironically, the music isn’t that great. Throughout the game, the most generic rock music plays in each encounter. Guitar riffs mark an event on the journey through the tower and the most typical compositions leave the sound unimaginative. There’s so much opportunity in games like this to incorporate original tracks, shredding solos, or just go absolutely bonkers with the creative theme and do something new. What’s here is expected but doesn’t stand out like the rest of the experience.

Throughout our playtime, there we no functional or technical issues. Power Chord ran as expected on a decent PC and even better on a touch-screen. Unfortunately, it does lack a lot of accessibility options. Particularly, there are no colourblind variations for a style that is so vibrant.

Power Chord unleashes its loud style upon deckbuilding roguelites. The game introduces a creative band format with strategic roles for each member to play, adding a new layer to the familiar gameplay structure. Still, it’s more style over substance with a lack of balance, interesting story or music, and a handful of gameplay issues. Otherwise, Power Chord is an entertaining game for fans of the genre.