I wake up on a spaceship. In front of me is a weapon. Sometimes it’s a shotgun, other times it’s a bow or pistol. I grab it along with some emergency oxygen canisters and go on my way. Stepping out into the dimly lit halls of the spacecraft, I’m carefully peeking around every corner, ready for something to jump out at me at any moment. I unlock a room with a trusty keycard and see the walls lined with an alien liquid matter. Something has its back to me in the corner. Oh God, what is THAT? In my latest VR Corner foray, Cosmodread brings me many of these sci-fi horror based scares. Despite some balancing and RNG issues with its rogue-like format, it can be quite the blast. If you dare.

Cosmodread situates players inside a horror rogue-like game all set within the sci-fi setting of being stranded on a spacecraft overrun by alien threats. With the power largely out for a lot of the ship, it’s up to players to cautiously explore, gradually getting stronger gear whilst restoring power. Succeed in getting the relevant materials and the ship may very well be powered up and running again, ready for your escape. As rogue-likes often prove, survival and getting there is the hard part.

Really, that’s as deep as the game gets and that’s okay. It works quite well as a concept. Despite being procedurally generated in its level design, there’s still that looming curiosity about just what the hell went wrong on this craft to drive you forward. Along the way, lore dumps in the form of found listenable audio logs can clue you in here. It’s all very Prey in the way you’re left piecing together the horrors of Cosmodread. It’s not as effective in doing so as its inspiration, but as an indie project, the game gives it its all. I adore finding more lore tidbits to games I frankly didn’t expect them to even remotely contain

Cosmodread has equally many novel VR gameplay moments as there are frustrations. All the actions of loading items into inventory, rifling through drawers, opening doors or powering up rooms via inserting a battery at a point and pulling a lever do well to immerse you in the restoration and exploration of the ship. To top this all off, players will regularly have to monitor their health and use emergency oxygen canisters to ensure they don’t run out of oxygen. This is achieved via holding the canisters found around the craft to your face, akin to an inhaler. A balancing game of performing all these actions while foes are creeping and crawling towards you is tense. I just wish it were tense for the right reasons.

Despite the monsters portraying a domineering presence in your environment, the real tension is how you’re going to get away from the exchange alive with limited supplies. That’s par for the course of a survival rogue-like game. The only difference is the RNG way too often doesn’t feel tilted in your favour. Each time you make a shot at escaping, you’re provided with a weapon. More often than not, you’re provided one of the weapons that packs a lesser punch. Get lucky enough to nab a more powerful weapon and you’ll be even more scarce of ammo. What this leaves the player with is often little means to proceed past rooms filled with enemies – stealth isn’t all that great and you sure can’t take on these foes with your fists.

“Despite the monsters portraying a domineering presence of your environment, the real tension is how you’re going to get away from the exchange alive with limited supplies.”

There are little steps to help you along the way. Game modifiers can be unlocked the more runs you do and then applied at the start of another go. Though, these skew towards more challenge than aid. Data drives that contain fabrication recipes to craft ammo, gear and the likes are sparse throughout runs for you to later use in on the dedicated machine in one of the more main, recurring rooms. Still, even as a seasoned rogue-like player, I often feel a little too out of my depths. What this comes down to is balancing.

You can evade foes enough to maybe slip past them and close the door behind them whilst not using any ammunition. Though, they’re still there to face you on your way back. RNG spawns for ammo, gear and especially healing items can sometimes be so few and far between that it feels the game is actively working against you more than it needs to. This issue can become glaring when you consider other VR rogue-like titles such as Until You Fall. That game, also previously explored in VR Corner, particularly works well to be fair enough to encourage the player to do “just one more run”. Over and over. When a run inevitably ends in Cosmodread, I’m dreading going through the next one. 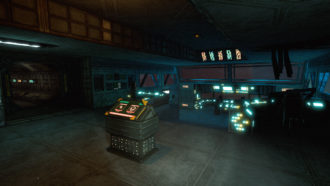 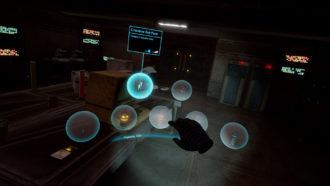 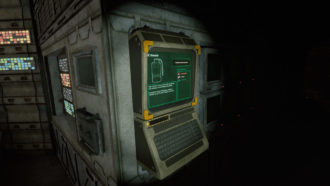 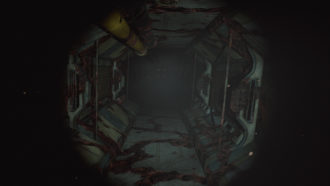 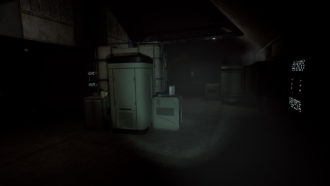 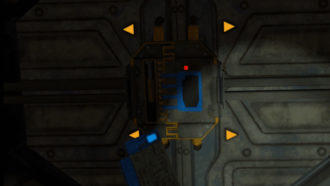 The balancing of the game is frustrating, to say the least, but only because of the potential and nuggets of gold the game has to offer. When you’re progressing smoothly, that sense of wonder is quite unmatchable to other VR games. More and more you’re learning about this craft, what the hell went wrong and just how you’re going to go about leaving it. Then you take one wrong turn and are faced with foes you absolutely will not be prepared to take on. Hence, it all comes tumbling down.

As alluded to earlier, Cosmodread is a game that pulls inspiration from many prior sci-fi horror greats. This applies not only to its gameplay but art design and style. Witnessing the alien matter that seeps its way across floors and walls like vines for the first time will leave you grossed out in an effective way. Stepping into a room, the atmosphere is set relatively well. Crablike alien creatures (that largely resemble Half-Life’s headcrabs) could be waiting for you around any corner. When one of the more towering creatures appears, like the humanoid bodied mass with its torso serving as the vicious jaw, you’ll likely say expletives to yourself, fearful of how to escape.

There is however room for improvement. Often you’ll step into a room where you’ll hear audio cues that very much sound like a foe that’s there in the room with you, only they’re not. These proximity audio cues, that sound akin to squelching, are instead seemingly pointing towards the matter you’ll find spread throughout rooms. Problem is, they’re a static object that don’t move or pulse in the slightest. This mismatch did leave me with some loss of trust with Cosmodread. Never when entering am I sure if an enemy stands there, until they’re right in my face.

I’m left between a rock and a hard place with Cosmodread. By no means is it a bad game; with some patches and balancing work, it could actually be great. The world and atmosphere you’re thrust into in the form of this hellish spacecraft is a solid enough premise. Toeing the line between being difficult and fair in a rogue-like cannot come easy and more challenges can appear in that regards when you make that genre of game into a VR title. Unfortunately, it doesn’t quite overcome those obstacles.

Cosmodread is a game that gives its all but still has some tough road ahead if it’s to succeed further. Still, a current ask of $18 on Steam is quite a reasonable price tag. Out of all the games I’ve explored for the VR Corner feature, it’s the one that’s begging most to reach its full potential.

If you’re after other reads of our recurring VR Corner feature where we tackle VR gaming gems, there’s plenty on offer. I recently got up and dancing to rhythm game Synth Riders. Meanwhile, Luke found his first VR Corner miss with an escape room game called Flow Weaver.