Hearthstone just got a brand new game mode: the Mercenaries mode. It allows players to craft unique mercenary decks, play single player campaigns in a PvE mode, and battle other players in a PvP mode. For those unfamiliar with Hearthstone, it’s an online free-to-play digital card game developed by Blizzard. Focusing on gameplay that features more roguelike and RPG elements, the Mercenaries mode will be available alongside Hearthstone’s other traditional modes like Standard and Battlegrounds, and have its own unique set of gameplay rules. We recently got a sneak peek of the new mode, and try out the game’s PvP and PvE. While mercenaries mode features Hearthstone’s trademark colourful and inviting art, I was struck by the amount of unique rules that come with the new mode, too. There’s a lot to keep track of in mercenaries, so brace yourself for a deep dive into the intricacies of the mercenary mode’s gameplay.

At first sight, the PvE campaigns in Mercenaries reminded me of Slay the Spire and Darkest Dungeon. Similar to Darkest Dungeon, you start your game at a centralised hub named the village. The village features different buildings where you can accept missions, craft and upgrade cards, create decks, and travel to different areas to tackle bounties. You can accept missions from visiting mercenaries at the campfire, upgrade cards in the caravan, and purchase packs at the merchant cart. As you progress through the game’s bounties and complete mercenaries’ missions, you can use your experience points to acquire new buildings and upgrade existing ones through a dedicated workshop. As such, you won’t be able to access certain features until you’ve built a particular building. To access PvP mode, for example, you’ll have to complete a number of bounty runs first in order to build the fighting pit. Once you’ve built the pit, you’ll be able to battle other human players there. PvE play, on the other hand, comes in the shape of bounty runs, which are available straight away. In bounty runs, you clear dungeons through completing procedurally generated maps with different kinds of encounters and a boss battle at the end.

For both the PvE and PvP mode in Mercenaries, you use decks consisting of six cards, with each card representing a mercenary. Decks are known as ‘parties’, and you’re able to put together several different decks to play with. While you start the game with eight unlocked mercenaries, you’ll have to unlock and craft more mercenary cards as you go. This can be done by using mercenary coins, which are obtained by opening mercenary packs. These packs can either be obtained as rewards for clearing dungeons or completing missions, or they can be purchased in the store.

Coins function in a similar way to card scraps in Gwent, except coins are linked to specific individual mercenary names. To craft a mercenary card that you don’t have yet, for example, or to upgrade an ability of a card that you do have, you’ll need a set number of coins linked to that specific mercenary character. If you want to upgrade an ability, you’ll need about fifty coins, whereas crafting a new card will take three hundred. So, if you want to upgrade Cariel’s taunt ability, for example, you’ll need fifty ‘Cariel coins’. Considering that there are over fifty cards to craft, and you only get a handful of coins after each battle and dungeon, it’ll take a while to collect enough coins and craft all available heroes if you’re unwilling to spend money. However, crafting different cards can be rewarding too, since it allows you to compile different decks, all with different strengths and synergies.

“…Mercenaries mode dished up some interesting mechanics that were very entertaining.”

Once you start a game in either PvP or in PvE mode, you have to commit to one deck of your choice for that particular match or run. While in PvP, you’ll only be committing to that particular deck for one battle, PvE comes with a slightly bigger commitment. As mentioned above, to clear a dungeon, you’ll have to guide your battle through a procedurally generated map similar to games like Slay the Spire, Monster Train, or Inscryption. Each map consists of a number of different encounters, ranging from battles, to boons where you can gain bonuses or allies, and mystery encounters that can contain a range of things. Each bounty run culminates in a boss battle. Once cleared, you’ll receive rewards ranging from new mercenary packs to cards and coins.

In terms of combat, there’s quite a bit to keep track of in Mercenaries. While the interface seems simple at first sight, there’s a surprising number of stats hiding beneath the surface. If you’re keen to be strategic about which cards to combine in a deck, keeping an eye on all these stats will be crucial. To start, there’s the straightforward numbers to take into account: each mercenary comes with an attack and health stat. The attack stat represents a card’s attacking power, while the health stat represents the number of hit points unique to the card. If this health stat drops to zero, your mercenary will die. Then, there’s speed, ability, and equipment. Each mercenary comes with three ability slots: one ability slot will be filled by an ability at level one, while the second and third ability unlock at level five and level 15.

Abilities function like attacks in combat: at the start of each turn, you’ll have to choose which ability to use that turn for each mercenary. Each of these abilities come with a certain speed stat too, which determines the order in which your mercenaries and your opponent’s units attack: lower ability speeds goes first and speed ties are resolved randomly. Some abilities have a cooldown before they can be used again, and others can be reused straight away. Some attacking abilities will deal return damage to your mercenaries, while others won’t. The order in which your mercenaries attack is a vital part of the game, since it can often tip the battle over to a win or a loss. You’ll have to pay close attention to mercenaries’ speed to determine whether your mercenary can use their healing ability in time before being attacked by a strong enemy, for example. Alternatively, if your mercenary gets a unique bonus when delivering the killing blow to an enemy unit, it’s important to time your mercenary’s attack just right. 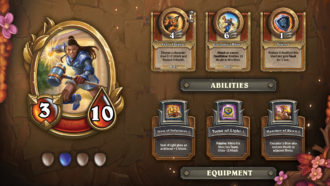 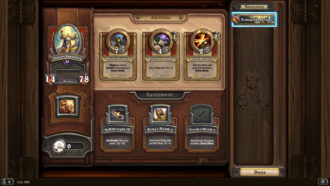 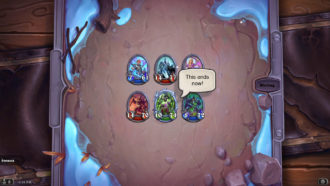 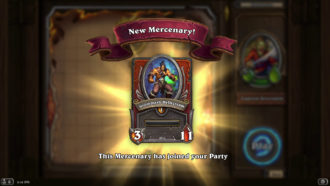 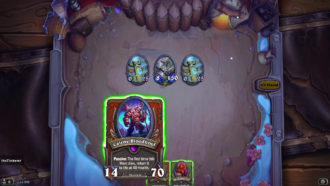 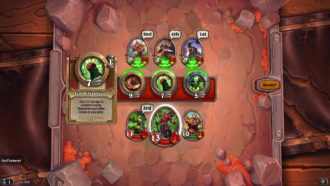 In addition to this, mercenaries can also hold one piece of equipment and have up to three different kinds of equipment to choose from. These pieces of equipment can enhance existing abilities further or grant passive bonuses in combat. You can obtain equipment by completing campfire missions known as ‘tasks’, or by having mercenaries reaching different levels. Mercenary cards level up individually after battle, so if you want to keep your all your mercenaries around the same level, you’ll have to make sure to compile different decks and switch between them regularly. Having different decks built around different strategies is key too, since there are multiple types of cards in the Mercenaries mode.

You’ll have to think carefully about crafting your deck and make sure you have enough different types of mercenaries on hand to survive different battles. While you can only have three mercenaries on the board at a time, your other three mercenary cards will be kept on the ‘bench’. This means that they’ll only replace a mercenary on the board if they die. But be warned: if one of your mercenaries dies during a bounty run, they’re unavailable for battle until the end of the dungeon, unless you can revive them during a mystery encounter.

While it took a while to wrap my head around the stats, types, and abilities, I found that the three different mercenary types — both for enemy units and for your own deck — kept things interesting. Considering your party weaknesses and working out the best heroes for creating attacking synergies was one of the things I found most enjoyable about Hearthstone’s mercenary mode. Particularly in PvE mode, where battles are often set up almost like puzzles, it felt really satisfying to figure out how to utilise the speed mechanics in order to emerge victorious. However, I did notice that PvE combat was sometimes repetitive in terms of enemy parties, and it made collecting coins and completing tasks rather grind-heavy at times.

While the roguelike elements in PvE were entertaining, I do think there are other games in the deckbuilder roguelike genre that deliver a tighter game loop, not to mention at a one-off fixed price. Compared to a game like Monster Train or Slay the Spire, the gameplay pace in PvE certainly feels slower and grindier, which will not be to everyone’s tastes. While you can play the game easily without spending a cent, it’ll take you significantly longer compared to players who regularly buy decks to bolster their card collection.

When it comes to free-to-play card games like Gwent and Hearthstone, I’ve always enjoyed playing against other people in PvP the most. In this sense, unlocking PvP was a welcome change of pace. It certainly made combat a lot more dynamic. On top of this, it was a great way to test out my decks since you’ll find yourself taking on the game’s complex PvP AI instead if the game can’t connect you with another human in time.

Overall, I found that Hearthstone’s Mercenaries mode dished up some interesting mechanics that looked promising and were very entertaining. While its PvE model is not as layered an experience as other roguelike deckbuilders, its PvP mode provides a fresh perspective on the traditional Hearthstone mechanics. If you enjoy online games like Gwent and the traditional Hearthstone and don’t mind a bit of grinding here and there, there’ll be plenty to love in mercenaries.