Grand Theft Auto V (GTA V) and re-releases. Is there a better love story? Maybe Skyrim and re-releases. Now we’ve got GTA V on the ninth-generation consoles, how does it stack up? If you’ve been living under a rock, GTA V is the fifth numbered title but the fifteenth GTA title overall. You play as three characters alternating between missions, a young street hustler named Franklin Clinton, a retired bank robber named Michael De Santa and a terrifying psychopath named Trevor Phillips. Set in Los Santos and Blaine County, in the state of San Andreas, you’ll find the world of criminals, the U.S. government and the entertainment industry frightening and deranged. With this, the trio must pull off a series of dangerous heists to survive. Can they trust anybody? What about each other? But more importantly, how does the update work, and should you buy it?

So, what’s the difference?

Rockstar upgraded GTA V with better visuals, and there are three modes to choose from Fidelity, Performance and RT Performance. Fidelity mode is better visuals at upscaled 4K on both Series X and PS5 consoles but with 30FPS. Performance mode is 60fps and 4K. Lastly, Ray Tracing Performance has 4K, 60fps and… ray tracing enabled. RT is the best out of the three, but there aren’t any major differences. Next is faster loading times, last time I played GTA V was on a 360, and the loading times felt like it took forever. But now it’s a lot quicker, from almost 3 minutes on the Xbox 360 to roughly 35 seconds give or take on PS5. Even loading between characters is pretty seamless, instead of what felt like an invisible loading screen it zooms out and in.

Due to PS5’s DualSense controller, Rockstar is able to immerse the player with weather effects, the texture of the road, directional damage and so on. Even pressing the triggers were difficult when it comes to driving and shooting. There’s an update to the audio, where it is now more 3D than before. You can hear the throttle of a car, gunfire elsewhere, even the police sirens. The use of phone calls coming through the PS5 controller is neat, along with beeps and boops you’d hear. GTA V does feel like a product of its time, where accessibility, sadly, wasn’t as important as it is now. Subtitles are great, but you can’t change colour to differentiate who is who, or even change the font size for bigger screens. With all these changes it would’ve been nice if Rockstar added some more functions for folks who want to play but can’t. 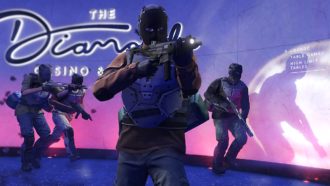 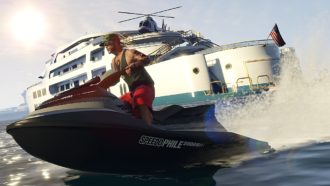 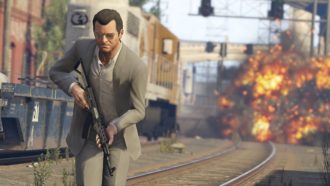 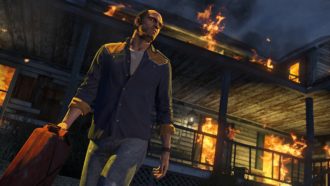 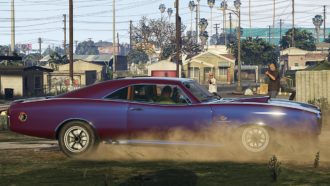 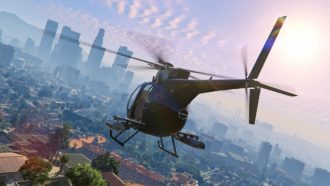 What about GTA V Online?

There are a few design differences when starting up GTA Online and going from Story Mode to Online Mode. Rockstar has given GTA Online a menu makeover; you can see everything it has to offer and jump into heists, races, and adversary modes. But if you want to go into freemode, or browse weekly events you can do that too. There’s also the ability to access all current and previous updates, like The Contract update with Dr Dre and a 2021 Franklin Clinton and The Diamon Casino and Resort update. Along with this, players have the opportunity to migrate profiles from previous consoles. If you have a Rockstar Games Social Club profile it’s seamless migrating your old characters. I was even able to migrate my Xbox 360 Online character to the PS5, something I never knew could even be achievable.

However, if you do decide to migrate your character(s), it’ll remove it from the console account it was initially tied to, so you’ll need to create a new character to continue playing on a previous console. That’s a bummer, yet, for players like myself who sold their previous console, it works in our favour. But, creating a new character in the current-gen consoles, allows for you to have a Career Builder. Initially, after creating a character you’re thrust into the world with Story Mode character Lamar Davis. But with the new update, you can choose one of four criminal careers — Executive, Gunrunner, Nightclub Owner or Biker. You have a selection of properties, vehicles and weapons to kickstart your career. However, the annoying part of this is that you can’t save your money, Rockstar forces you to spend between $3 – $4mil.

“I’m super impressed by the upgrade, and the haptic feedback on the Dualshock controller will always amaze me…”

There’s a small number of new quality-of-life upgrades for old players, like choosing different session types or finding a new session in GTA Online. There are adjustments to base payouts on Biker Sell Missions and Nightclub Daily Income. And GTA Online is a standalone title. Initially Online came out two weeks after Story Mode, as Rockstar wanted players to actually play the single-player before multiplayer. At the time a lot of single-player modes were being ignored by players who only played multiplayer. But now that it’s nine years later, it’s great to see that we don’t have to install an almost 87GB game to only play online.

The new graphical update is nice, and it’s fun to replay GTA V. The feeling of the tiles or road on the controller is a lot of fun and it even changes depending on the camera angle you choose. The ability to switch between characters isn’t dreadful unless you’re switching to an Online character, then it’s a bit of a dread, but that’s a given with Australian Internet. I’m super impressed by the upgrade, and the haptic feedback on the DualSense controller will always amaze me. But, realistically, this upgrade just feels like such a small thing in the grand scheme of things, but not only that… it’s not free.

Honestly, it depends. If you missed out on playing GTA V, then it’s worth it, especially with the current price. GTA V, while a bit dated in its story, is a fantastic game, the story and characters are great, and sometimes it’s fun to hit-and-run. If you played it before when it came out but want to replay it again, it’s also not a bad initial price. If you enjoyed the story or had fun playing with your friends then give it another shot with updated graphics. But, if you’ve already got it on last-gen consoles, or you have it on PC, maybe skip it unless you really want to experience a small upgrade.

GTA V Story Mode on the PS5 costs $15AUD until June 14th when it’ll go up to $60AUD. This is regardless of if you owned it on PS3 or PS4. GTA Online on the PS5 is free and players without PlayStation Plus membership can claim a free 7-day free trial. Whereas on the Xbox Store it’s currently listed at $30 with 50% off, and it looks to include GTA Online. GTA V Story Mode and Online are available now.