During the Gamescom Opening Night Live, Insomniac Games released a new gameplay demo for their upcoming PlayStation exclusive, Ratchet & Clank: Rift Apart. The clip, clocking in at just over seven minutes, delves into more detail about the rifts and where they have come from. The duo’s archnemesis, Dr. Nefarious, now wields the Dimensionator that has the ability to open portals to other dimensions. During a battle with the Dr, the weapon leads Ratchet and Clank to dimension hop. We see the duo hop around different worlds, including a rich jungle, a pirate ship and a world with flying dragons. There was also a little glimpse of a new character, a female Lombax that lives in another dimension.

What was extra cool about this hopping is how it occurred so quickly, hopefully showing how quick loading speeds will be on the PS5. Sony have promised that the loading speed on their new console will be vastly improved, so let’s hope this is a sign of awesome things to come!

The clip also showed off Ratchet’s brand new arsenal of weapons. These include the Burst Pistol, Topiary, Sprinkler, Shatterbomb and the Enforcer. On the PlayStation Blog, Marcus Smith, the creative director of Insomniac Games had this to say about the Enforcer: “This double barrel shotgun has multiple fire modes. Pull the trigger halfway and it fires a single shot. Squeeze passed the first stage and you will unload a double barrel blast instead! And with the 3D audio, you will be fully immersed – hearing everything above, below and surrounding you.”

Ratchet & Clank’s first appearance was on the PS2 back in 2002, with the self-titled game being re-imagined by Insomniac in 2016 for the PS4. Since their debut in 02′ the series has had ten spin-offs and sequels. Sony acquired Insomniac games in 2019, probably due in large part to Insomniac’s highly successful PS4 exclusive title, Marvel’s Spider-Man. Therefore, all future Insomniac titles will also be PS exclusives. 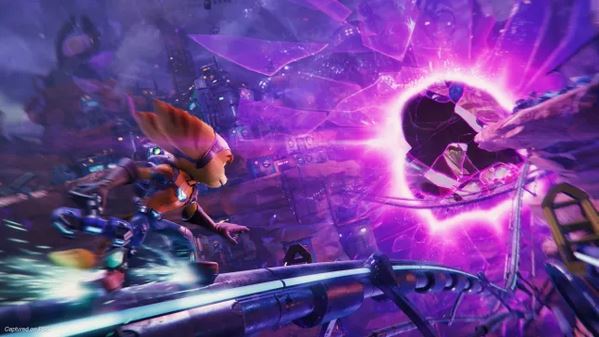 Though there is no release date for this title just yet, it has also been revealed that Ratchet & Clank: Rift Apart will release during the PS5 launch window.