Xbox Series X and PS5 pre-orders were a clusterf**k

There’s no other way to say it.

The dust has finally settled after a week of absolute chaos when it comes to pre-ordering a fancy next-gen console, whether it’s the PlayStation 5 or the Xbox Series X. They both handled their pre-order situation quite differently, but each had serious challenges that left customers angry, stressed and exhausted. Plenty have come away from the experience unlikely to receive either console until 2021. To put it bluntly, the Xbox Series X and PS5 pre-orders were a clusterf**k.

There are a number of reasons why this could have occurred. Globally, we’ve spent most of the year battling uncertainty and strict lockdown measures due to COVID-19. There has been a massive increase in video game sales, and the next generation feels like the perfect addition to our cabinet right now, after months of boredom stuck in our homes. Rumours swirled, and official reports even stated that there would be a lack of PS5’s available on launch due to a shortage of stock. Xbox didn’t mention any potential trouble like this, but there still loomed an overarching question around just how many Xbox Series X consoles would be available on launch.

Xbox were first to reveal their plans. Release date of November 10th, price of $750AUD and pre-order date of September 22nd around the world. We waited patiently for PlayStation to follow suit, after they’d previously stated they would give gamers “plenty of advance notice”.

Of course, PlayStation probably wanted to get in first with their pre-order date, and when Xbox announced their timing, they panicked. A PS5 Showcase event on September 17th showed off some upcoming titles to get excited about, and revealed their release date of November 12th, price of $750AUD and… no pre-order date. It would have been nice to know when the pre-order date was, given the hype. But surely it’s soon. Then, word came that the PS5 pre-orders would possibly be going live the very next day and OH WAIT A MINUTE THEY’RE LIVE NOW.

With zero time to prepare, 8am AEST, pre-orders opened up on retailers around Australia and around the world. Some were lucky enough to be working from home like me, with Twitter open on another window that quickly started spreading the word of pre-orders being available. I snagged a launch day console pre-order, but it wasn’t long before that shipment seemed to fill. Then the next 2020 shipment. Then the first 2021 shipment. Within a couple of hours, if you missed out on that window, it looks like you’ll be without a PS5 for around another 9 months at minimum.

Remember when they said they’d give gamers plenty of advance notice?

Let’s be honest: PS5 preorders could have been a lot smoother. We truly apologize for that.

Over the next few days, we will release more PS5 consoles for preorder – retailers will share more details.

And more PS5s will be available through the end of the year. pic.twitter.com/h1TaGsGBun

The above tweet is a classic case of “it’s easier to ask forgiveness than permission”. While the promise of more consoles might seem great in theory, in reality each Aussie retailer is already booked up for months. Even if some extra ones come this year, they’ll go to customers that are already waiting in the virtual queue, not to anybody else. The best we can hope for is a slightly earlier 2021 shipment. Essentially, the PS5 pre-order sold out within hours, with rumours that 75,000 consoles were allocated to EB Games Australia alone. That’s some big numbers. Would the Xbox Series X launch be the same?

Tuesday September 22nd. 8am. I remember it like it was yesterday. Oh wow, it was actually yesterday, it just feels like weeks ago – thanks Melbourne lockdown!

Rather than dropping a pre-order out of nowhere, Xbox committed to a set time, and they stuck to it. They even reiterated that people would have plenty of notice on the timeframe, a small friendly dig at their competitor after public outcry of “missing out”.

So this one I’m ready for. In fact, my whole squad was ready. Everyone was ready. Unfortunately, this led to the reverse effect of last week. While PS5 pre-orders lasted a couple of hours with no advance notice given, the fact that everybody knew when the Xbox Series X pre-orders were starting meant that there were thousands upon thousands of people ready to click “pre-order” bang on 8am. I chose to use EB Games as my preferred retailer, simply because they have a pretty fantastic trade-in deal of old Xbox One consoles to go towards their shiny new Xbox Series X/S, and this bear is on a budget.

Upon loading the pre-order into my cart and clicking purchase… errors. So many errors. Errors I’d never seen before. Errors burned into my brain. Why isn’t it purchasing? I’m clicking, I’m refreshing. I’m logged in on my laptop, my phone and my tablet. Each time, error. ERROR. I’m even a Level 4 EB Member. I know that’s wanky to say that, but that’s meant to allow for “priority on pre-orders where available”. Not this day.

Ten minutes pass. “Sorry, this shipment of Xbox Series X is pre-sold out.”

By this point, other retailers had begun to sell out as well. Microsoft Store, JB Hi-Fi and others closed off their pre-orders. Throughout the morning, Big W, Target and more would do the same – pop up, sell out within 10 minutes. EB Games promised a secondary shipment of pre-orders at midday. At 11:55am, that changed to 3pm.

What the hell is going on?

It seemed a very small number of people actually secured an Xbox Series X from EB Games. Others put in pre-orders with retailers that were not 100% certain. Even JB Hi-Fi, one of the biggest gaming retailers in the country, aren’t able to confirm whether you’ve secured a launch console or not until closer to the date. How stressful is that?

Rumours circled about bots and scalpers ready to hit the button quickly on multiple devices as soon as the time ticked over. This same thing happened at 3pm. Error. Error. Error. After thirty minutes, Kolby from our team at Checkpoint slipped through the cracks and managed to secure one for “TBC 2020”. But I missed out. My whole squad missed out.

A quick look at eBay confirmed what I’d feared, and showed that there are some real jerks out there looking to make a profit on the concept of FOMO 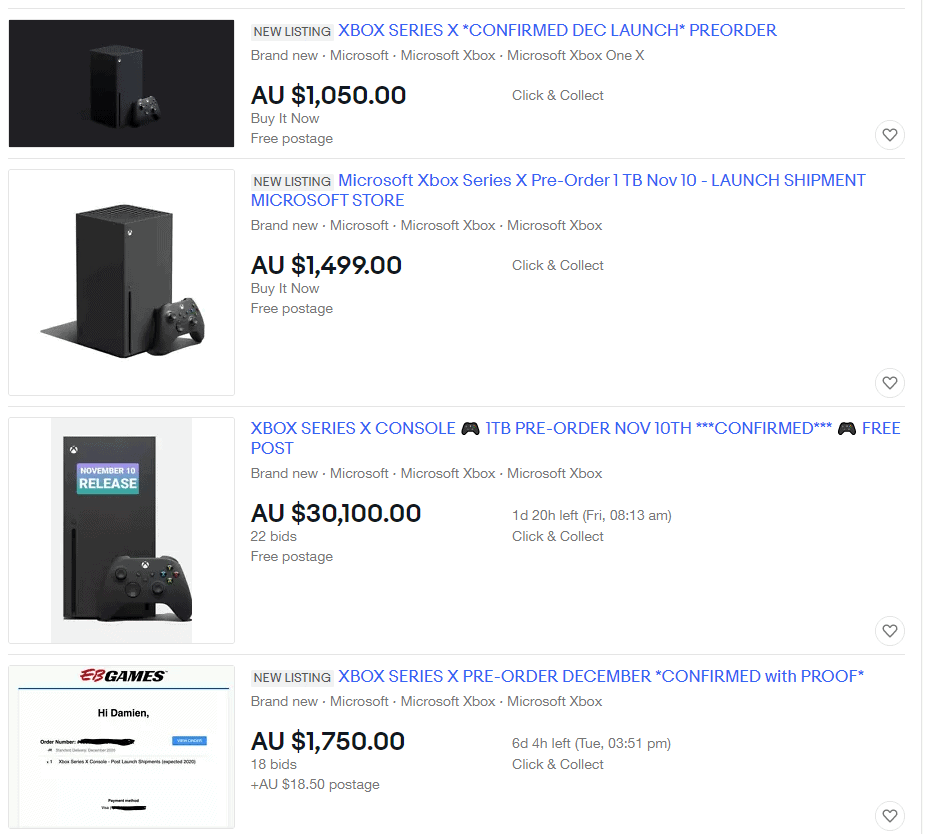 It seemed like the time being so publicly advertised was to regular customers’ detriment. It probably didn’t help that Xbox announced a game-changing deal with Bethesda right before the pre-order took place. Then there’s the folk who missed out on the PS5, looking to at least get in on next-gen before the new year.

Not just an Australian problem.

Internationally, similar reports have surfaced of retailers websites crashing under the load. Perhaps laughably, the current generation Xbox One X experienced a massive bump in sales, possibly because customers were confused about the naming conventions of the next Xbox generation, giving me flashbacks to the Wii U days.

Wonder how many people bought an Xbox One X instead of an Xbox Series X https://t.co/atj4thPwqD pic.twitter.com/CUzRkib3Sr

At the end of it all, 5:30pm AEST yesterday, this editor was lucky to get a pre-order of an Xbox Series X, also for “TBC 2020”. But it was a stressful day, not just for me, but for gamers all around the country. To some, it’s just a gaming release. But to us gamers and console lovers, it’s the next big generational leap in technology, the first in seven years. We’ve waited for this day for a long time, and we’ve been anticipating the pre-order process to be able to secure our seat on the hype train. To not be part of all of that launch excitement? Well, it f**king sucks.

Through all of this, remember to be kind to retail staff out there if you did miss out. It’s not Kevin at your local EB Games’ fault that their website is built with the same technology that fueled emoticons on MSN Messenger back in 1999, held together by duct tape and tooth-picks.

I genuinely hope you managed to secure your Xbox Series X and PS5 pre-orders, and I hope retailers, PlayStation and Xbox all learn from this experience.