Riot Forge, the subsidiary set up by Riot Games to publish single-player League of Legends spin-off titles, has released Ruined King today by surprise alongside Hextech Mayhem. Ruined King was previously set to come out in early 2021, but was delayed to an unspecified date this year. Now both games are available for purchase on PC and consoles.

Ruined King: A League of Legends Story is a turn-based role-playing game set in the bustling city of Bilgewater and the mysterious Shadow Isles. You play as an unlikely party of six champions, although you can only control three at a time in battle. Ruined King introduces the Lane Initiative System, which allows the player to alter the speed of their actions, react to environmental events or modify the effects of their abilities.

Ruined King is developed by Battlechasers: Nightwar developer Airship Syndicate. That pedigree is evident in the how they share the same mix of overworld puzzles and turn-based combat. Still, it seems like fans of turn-based RPGs are in for a treat, even if they aren’t familiar with the League of Legends setting. 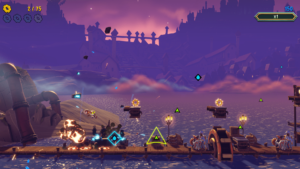 Riot Games has been busy with expanding the League of Legends brand beyond its popular MOBA title. In addition to these recent single-player games, they have also branched out to animation with the Arcane series on Netflix. Furthermore, Convergence, a single-player 2D action platformer by Speed Brawl developer Double Stallion, is set to come out next year. Working with outside developers to incorporate different genres and media into League of Legends is a good way of reaching out to audiences that aren’t into MOBAs. At least for now, players can check out Hextech Mayhem and Ruined King on PC, Xbox One, PS4 and Nintendo Switch.