It’s really hard being a WWE fan sometimes. Not just from the people who, to this day, still judge you a bit just for liking wrestling in the first place. The state of the current product is very strange, with the company flying its superstars over to Saudi Arabia twice a year for events that women aren’t even allowed to wrestle at and a new expensive deal on FOX in the US shifting focus from their current talent over to some second-rate UFC stars. At the end of the day, it’s a business first, focused on making money instead of satisfying its fans.

I’m providing this context, as a WWE fan, because it feels like the cash-grab ethos has seeped into its yearly video game franchise as well. With seasoned wrestling game developer Yuke’s stepping aside and leaving it in the hands of Visual Concepts (who normally focus on developing NBA 2K), WWE 2K20 has launched in a haphazard, buggy state that, despite some creative ideas, prevents it from being the excellence of execution and instead mimics the live product a little too closely in being a disappointing and jumbled mess that doesn’t know how to use its assets properly.

Let’s focus on the positives though, at least for a bit. WWE 2K20 brings a focus to the women’s division in a way that previous wrestling games have never bothered, and I am stoked about that. Becky Lynch as the first female cover star, a focus on the Four Horsewomen (Becky, Charlotte Flair, Sasha Banks and Bayley) in the games 2K Showcase mode and the addition of mixed tag matches make this the most diverse wrestling game ever created, and that’s something worth applauding. The women in WWE have worked their arses off over the last few years to cement themselves as being on equal footing to the men, and it’s awesome to celebrate that in-game.

On top of this, the games MyCareer mode has you focused on not one, but two wrestlers – a male and a female. Lifelong friend and wannabe wrestlers, the story mode focuses on them being inducted into the WWE Hall of Fame, and then through flashbacks and memories during the conversations between them, has you playing through their career from complete nobodies to bona fide superstars. The writing itself is pretty cringey for the most part and definitely has some pacing issues, but the actual idea is pretty strong, and I enjoyed this light-hearted take on the story, appreciating little touches like the fact that commentary was recorded specifically to further along and sell the careers of your created superstars.

Some of the progression in this mode falls flat though, as it does take a while to actually build up your character, and your career in WWE itself takes a while to get to with a lot of set-up. The skill tree involved to get more skilled in the ring is also a miss, as you can’t see in advance where on the skill tree you want to go, which makes planning your build feel mostly random with diminishing returns. Unlocking new content such as moves, gear pieces and so forth is still also annoyingly random and behind a loot crate system – which thankfully doesn’t require spending real world money, but still left me mostly uninvested in the process that was partly out of my control.

It also has a very low budget look to it. That’s a polite way of saying that in many cases the cut-scenes and character models during the MyCareer mode in particular look like they belong on a Xbox 360 (or even an original Xbox/PS2). That’s not the kind of thing you should be shooting for in a late generation sports game as we are about to launch new consoles this time next year. These graphical problems aren’t just exclusive to this mode however, as the rest of the presentation in WWE 2K20 just looks… off.

The visuals when in-ring actually look fine (at times, I’d say they even look good), but it doesn’t take long before you notice some real strangeness. For example, the way the character models look on the superstar selection screen are a bit dead inside, all doing the exact same pose and highlighting how messed up their faces look. Roman Reigns, Becky and others look okay and have had more time put in, but other “lower tier” superstars like Peyton Royce, Rhea Ripley and even legends like The Rock just look wrong or downright inaccurate. The large roster of WWE, NXT, NXT UK and Legend superstars is actually pretty damn impressive, but it sucks that so many of them look so weird. 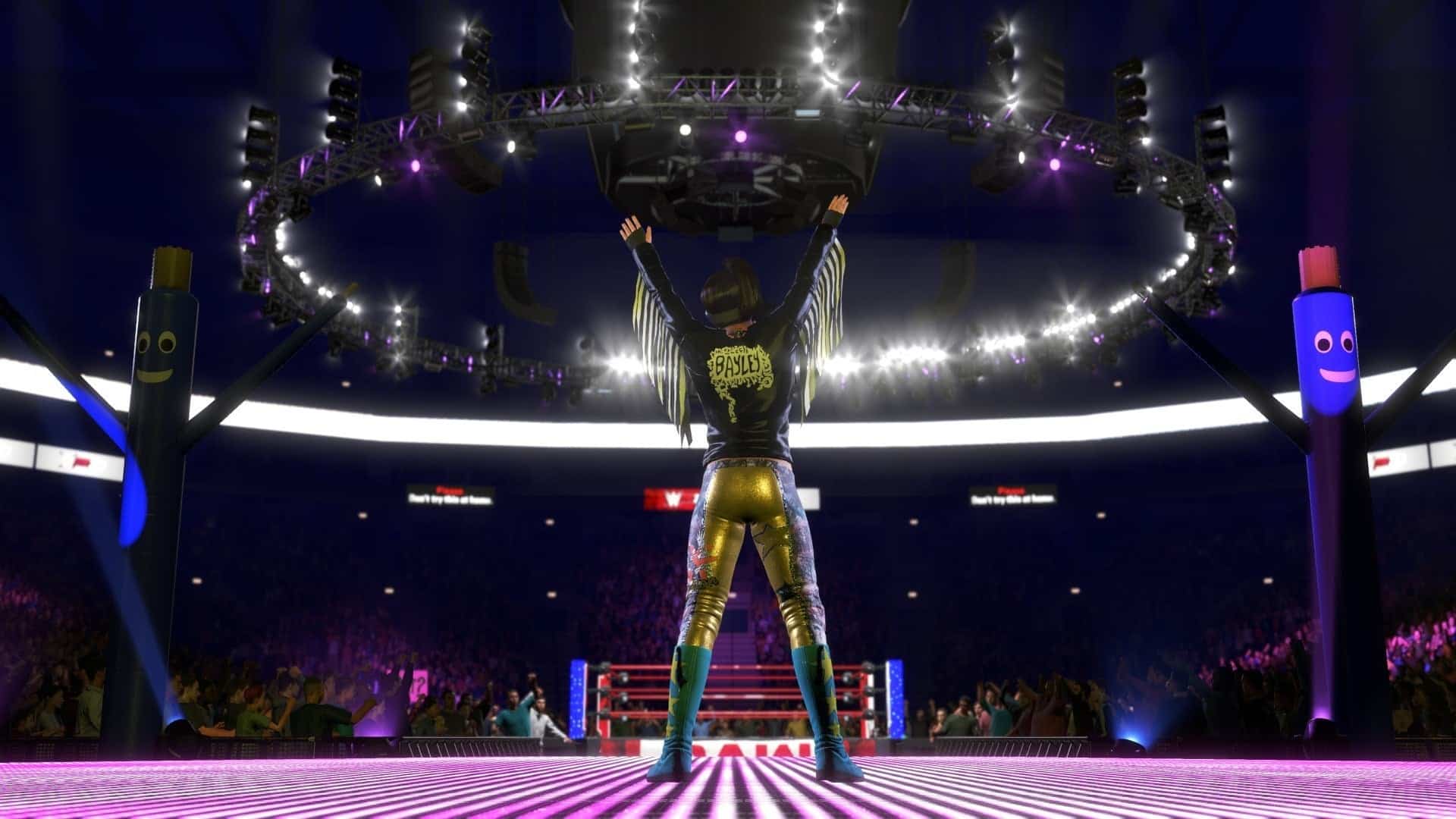 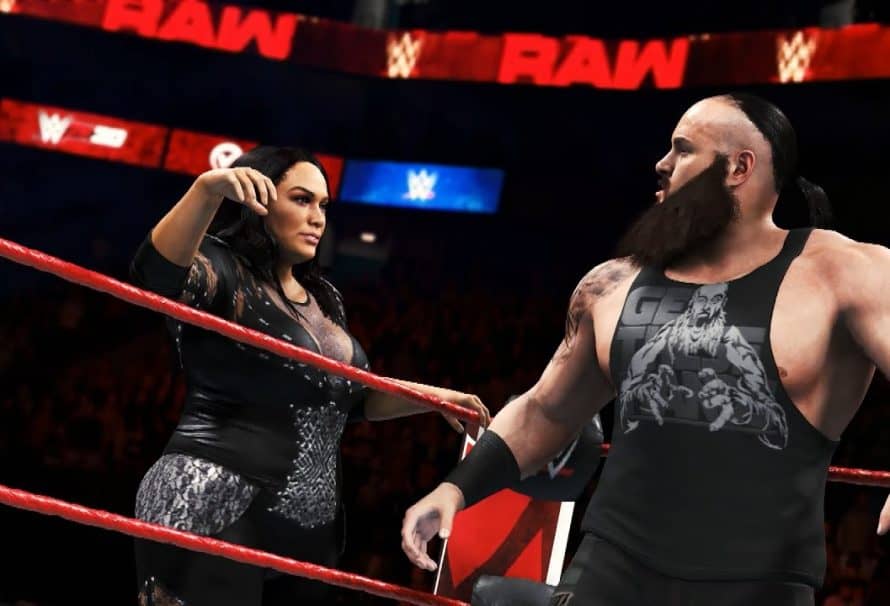 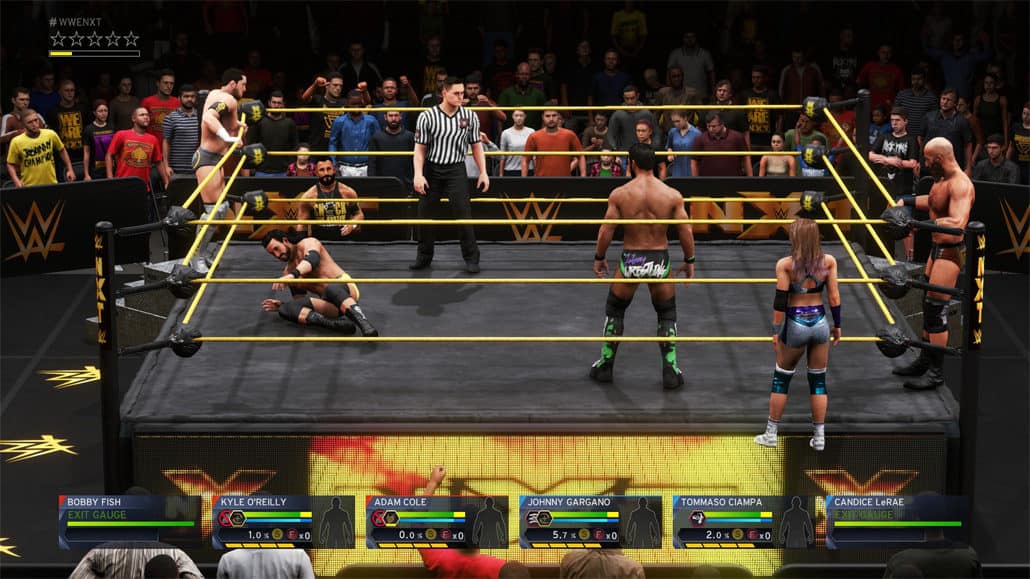 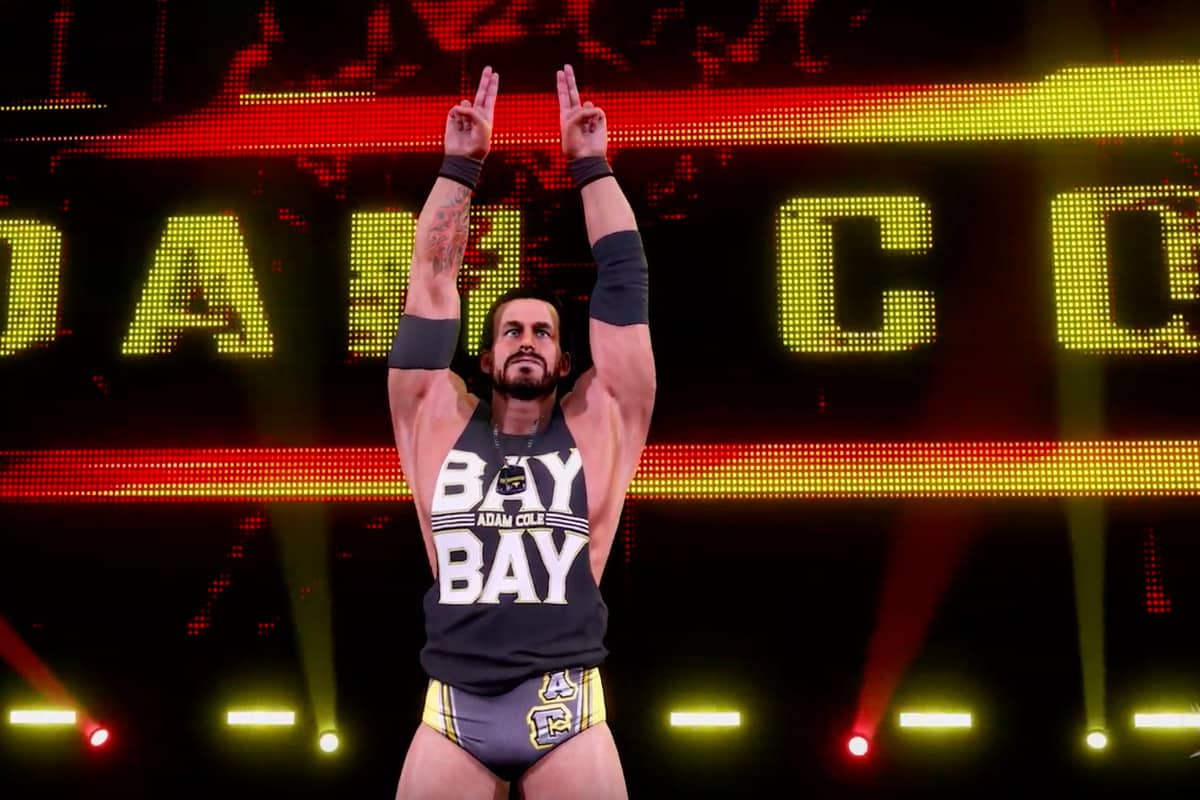 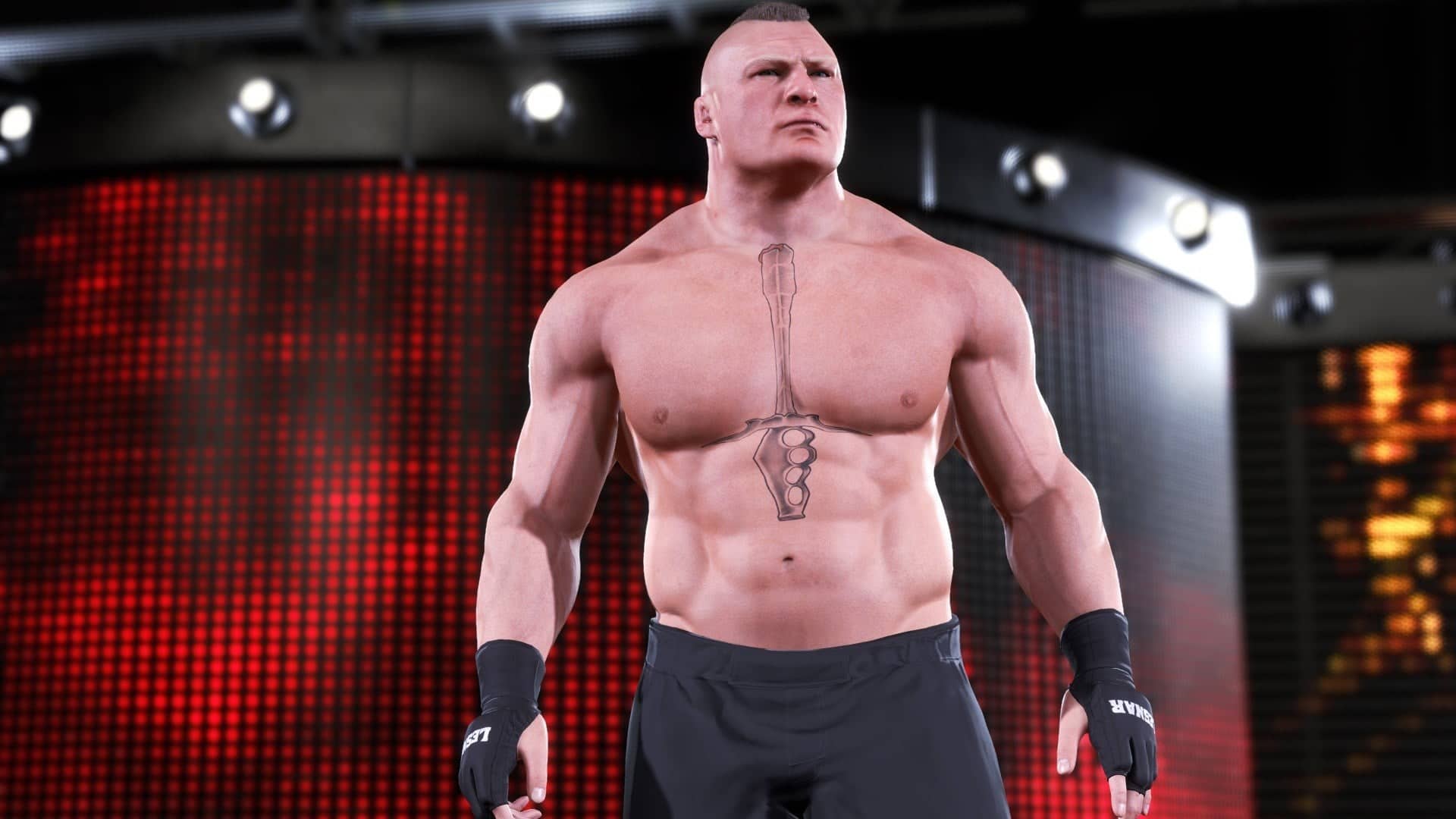 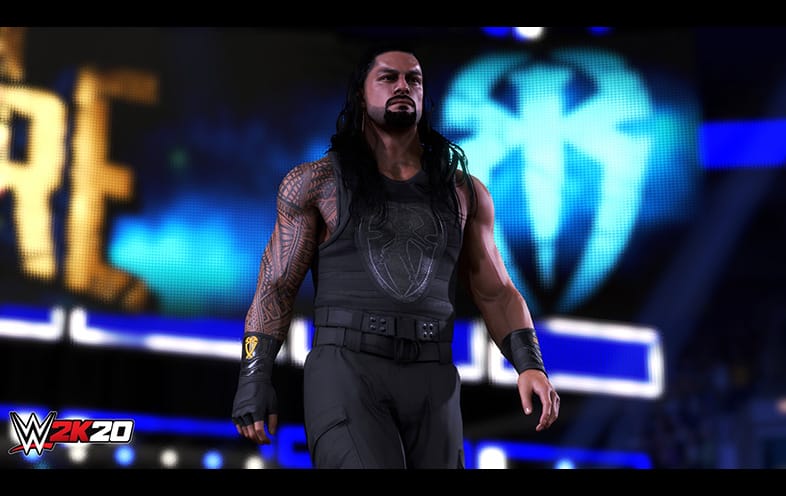 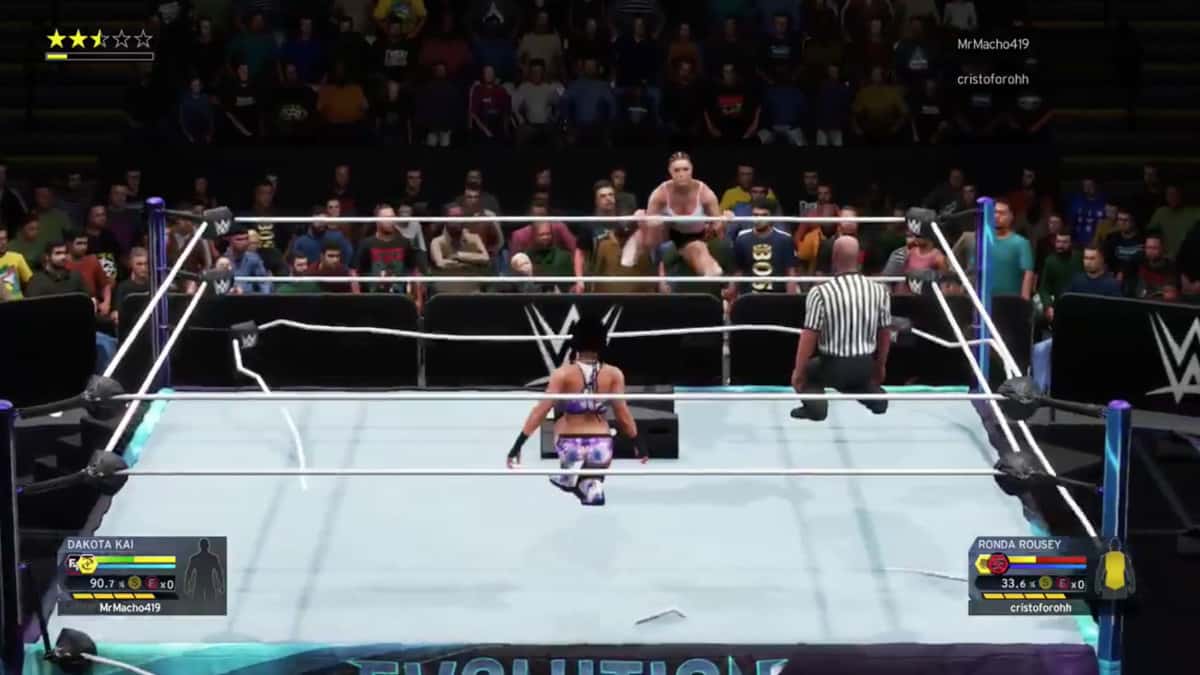 This leads into the many technical issues that the game has, which I can only assume is due to the development struggles late in the piece – but, excuses aside, they really are unacceptable in a full priced release like this. WWE 2K20 has many glitches and bugs that range from “Bethesda haha funny” to “game-breaking”, including:

Now, these problems don’t occur during every single match, and many of them can be laughed off, but overall it is still frustrating to see a WWE game launch like this (which, complaints aside from previous years, usually at least launch relatively polished), especially considering WWE 2K19 was actually decent. 2K have promised a patch is coming in the next couple of weeks, but we’re still not sure exactly what it will be fixing, given there are so many issues. At least it still features a pretty robust creation suite and the 2K Towers are still pretty enjoyable to jump in and play through.

There are other struggles in WWE 2K20, despite the in-ring gameplay mostly remaining untouched. There are some minor changes like the way countering works but while others might call it a step back for the series, I didn’t find this to be too problematic; it only took me a couple of matches to find my way back into a good rhythm. Troubles from previous years still exist though, particularly the “getting pinned” mini-game that still results in some frustrating and downright embarrassing losses for those who simply have bad timing.

The Showcase mode, while a great spotlight on the Four Horsewomen, also can be incredibly irritating as you try to complete very specific match objectives. If you mess one up, you have to replay the entire scenario, which sometimes can take up to half an hour. I appreciate it’s a different take on a story mode and allows for key moments to be recreated from history, but there has to be a better way to do this, like a checkpoint system that doesn’t force you to repeat things from scratch or a way to skip to the next chapter.

Also, the “Bump in the Night” DLC featuring arguably the hottest act in all of wrestling, The Fiend, is annoyingly locked behind separate purchasable DLC. To use him in the trailers and marketing and then release this as an extra cost (unless you pre-ordered) is anti-consumer, especially since all reports are that the over-the-top “tapping into the craziness of wrestling” mode actually seems like it would be a lot of fun and potentially a pretty redeeming feature in a game that sorely needs it.

WWE 2K20 is a step back for the series, with frustrating bugs and visuals that just aren’t up to par with most modern releases. The game is fun in short bursts and there were plenty of matches that ran relatively smooth, and the gameplay is fine. I also love the focus on the women’s division this time around and appreciate the thought that’s gone into the story this year. But it’s very difficult to focus on the positives when there are so many things actively preventing you from having a good time.

On the flip side, I’m hoping Visual Concepts can turn this around, learn from their (big) mistakes this year and work towards a better experience for WWE 2K21. The creativity they’ve shown with the MyCareer mode and loopy DLC tells me that they understand what makes wrestling silly and fun – but for this year, WWE 2K20 leaves me with the same thought I had after the finish to the recent Hell in a Cell PPV match between Seth Rollins and The Fiend: “How the hell did they mess this up so badly?”