Chronos: Before the Ashes Review – Dark but Soulless

If I had to describe Chronos: Before the Ashes in three words, they would be “eh, it’s fine.” It’s the prequel to last year’s Remnant: From the Ashes, a game we liked quite a bit. Like Remnant, Chronos is also a take on the Souls-borne-kiro genre. But whereas Remnant was succinctly described as “Dark Souls with guns”, Chronos is “Dark Souls with a sword and shield”. Which is to say, it plays a lot like stock-standard Dark Souls. Apart from some clever design and mechanics, it doesn’t do enough to distinguish itself from the works of FromSoftware, which was something Remnant did quite handily. Chronos is not a bad game, but it’s certainly not a great game either. It’s just…fine.

Chronos is set in the same world as Remnant, but there’s so little plot here it hardly matters. You play a sad teen tasked with ridding the world of an evil dragon. You must venture out of your Fallout-esque post-apocalyptic base, teleporting to other worlds full of monsters, puzzles, and expository diary entries. Character customisation is scant. You’ve got a choice of two genders (female or male – both white), two starting weapons (sword or axe), and three difficulties (Casual, Adventure, or Heroic) and that’s it.

You have a magic meter that fills up during battle and lets you unleash a temporary power-up, like having increased speed or defence. Whenever you kill an enemy, you accrue experience towards gaining a level. At level up, your health is refilled – which is a godsend when you’ve run out of Dragon Hearts – and you gain skill points to increase your Strength, Dexterity, Arcane, or Vitality stats. Most interestingly, every time you die, your character ages by one year.

You start at age 18. When you’re young, your Arcane stat (which governs magic power) is more expensive to increase compared to the others. Starting from age 20, you get to choose a permanent buff every 10 years. As you get older, the Arcane stat gradually costs less, while the others cost more. It’s a fascinating system on paper, a great way to use gameplay to show someone getting weaker yet wiser, and it was cool to see my character visibly age over the course of her adventure. But I had mixed experiences with it.

I initially played a few hours on Heroic mode (which is listed as “the purest form of the game”) and I hated it. Combat was laborious, with many enemies leaving their guards up indefinitely until I made the first move, which they would counter before I could land a hit. I died constantly, and aging every time felt like I was being punished for trying something new. There wasn’t much room for trial and error, and I found that frustrating. My character was 28 and nowhere near the first boss, so for the sake of expediency I restarted a new game on Adventure mode, and had a much better time.

I enjoyed fighting this time, and I was able to experiment with blocking and parrying and dodging to respond to enemy attacks. Enemies also didn’t block forever anymore. But lowering the difficulty highlighted the game’s flaws in combat. Chunky animations that trigger half a second after you press the button, enemies landing a hit even after you’ve clearly dodged out of the way, or certain attacks stunning you while your stamina’s full, all add up to an experience that is serviceable, but sloppy. I still enjoyed my time with Adventure mode, and committed myself to getting to grips with the combat, because despite my frustrations with it, I was still having fun. But then I found out that spamming the heavy attack button will stunlock most enemies to death. This was undoubtedly a cheap exploit, but especially when I was running back through a section I’d already played, this was a much more efficient – and honestly, more entertaining – way of getting through the game.

Chronos also contains many puzzles, and I overall liked how they were handled. A lot of them are as simple as picking up an artifact in one part of a level and figuring out where to slot it in to open a door, but others are more complex. I encountered one puzzle which required retrieving a key out of a locked cabinet. I eventually figured out how to shrink myself down so I can sneak into the cabinet and push the key out from the inside. There’s a bunch of puzzles throughout each level that are just as clever and satisfying, but some seem random and poorly thought out. At one point I was frantically running around a level looking for a puzzle solution – there is no map in the game – while being chased by invincible monsters who could kill me in one hit. Turns out, the solution was to enter the menu and dismantle an artifact I’d used to solve a prior puzzle. At no point did the game tell me that dismantling is even an option. There’s good ideas in here, but, like with the combat, there’s a layer of sloppiness holding Chronos back.

A lot of this sloppiness made sense once I found out this is a port of a game released on the Oculus Rift in 2016. The original Chronos used a fixed camera, whereas Before the Ashes uses a third person perspective. This sounds like a better way to play the game on non-VR consoles, but the camera often gets stuck against walls, and disorientingly rotates whenever you walk through specific doors or interact with ladders, which I couldn’t cancel out of. The game’s origins would also account for why, graphically, Before the Ashes isn’t as appealing or interesting as Remnant. But the art design is charming throughout. 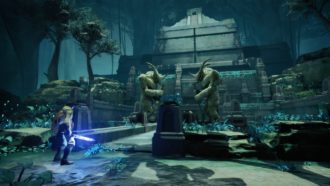 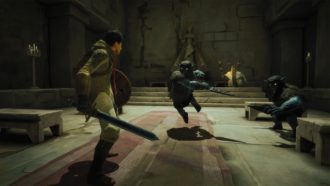 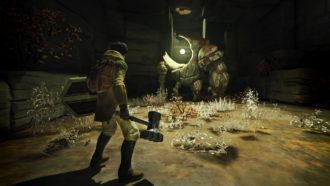 Chronos: Before the Ashes is not a bad game. It just feels like, by transitioning out of VR, it may have lost some of its original polish. It’s got plenty of smart ideas in its gameplay and world design. But apart from its aging mechanic, it felt like Chronos wasn’t doing anything that other games haven’t already done – and done better. If you’ve absolutely exhausted yourself of FromSoftware’s library, and other better games of its kind (including Gunfire Games’ own Remnant: From the Ashes), and you’re looking to scratch that Souls-like itch, then Chronos might be for you. It probably shouldn’t be at the top of your list, though.