Team17’s Worms franchise has been going strong for well over 20 years at this stage. As such, perhaps it was overdue for a bit of a change-up. The Worms games have previously been strategic turn-based affairs, featuring teams of worms chipping away at each other with various crazy weaponry. This latest instalment, Worms Rumble, jettisons that tactical element in favour of a 32-player, 2D multiplayer-focused arena shooter with a distinct Battle Royale flavour.

Many of the changes seemed outright sacrilegious to a series fan like myself at first. However, after spending a good amount of time with Worms Rumble and its three game modes, it has won me over for the most part. It is certainly a different kind of experience to the main series entries, but so long as you view Worms Rumble as its own distinct entity, there is a lot to like here.

Worms Rumble has a ridiculously fast pace, with players encouraged to roll around on the move at all times and shoot the first thing vaguely worm-shaped that they come across. The levels are vast, yet compact enough to make avoiding confrontations difficult. The player starts with a basic weapon such as the Hand Cannon, but weapons, grenades and utility items are scattered liberally across the map, either in crates or dropped by dead worms. By using the baseball bat to break down air vents, players can also hide in ducts and take potshots at nearby opponents. Returning items such as the Rope and Jet Pack also provide many fun mobility options for getting around. New weapons, like the Sentry Launcher and Rocket Shield, let you set up and protect against ambushes.

The lightning-fast rocket-tag gameplay is the game’s biggest asset, providing quick bursts of excitement between inevitable and frequent respawns. Unfortunately, that pacing works against one of the biggest appeals of the Worms games for me, which is the massive arsenal of weapons. Most of the series mainstays return here, from the humble Assault Rifle and Shotgun, to the more ridiculous, like the Sheep Launcher and Banana Bomb. For me, one of the best aspects of the turn-based Worms games was setting up the right scenario to deploy difficult-to-use but highly effective weapons like the Sheep or the Holy Hand Grenade.

In Worms Rumble, there was rarely any time to use one of the weirder, more complicated weapons; I would always get shot trying to aim my Sheep or have worms scurry out of the way of my Banana Bomb. When you can only carry two guns at once, there was not much room for experimentation. It led to games where I would rely exclusively on one or two weapons for convenience sake, particularly the Assault Rifle and Shotgun. It’s an effective strategy, sure, but I rarely felt there was a good time to make use of many of Worms Rumble’s arsenal when the boring default weapons were more useful. 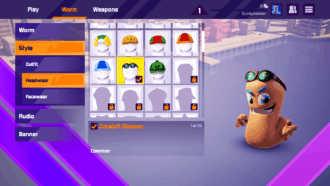 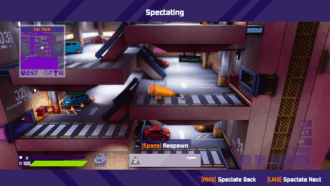 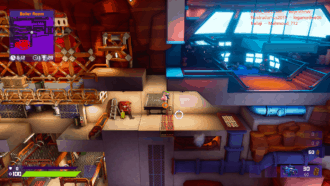 After a brief tutorial, players can access the three game modes that Worms Rumble offers: Deathmatch, Last Squad Standing, and Last Worm Standing. I spent most of my time with Deathmatch. It was the only one I found myself consistently OK at, and also seemed to be the most populated with other players.

Deathmatch is perhaps most akin to your average multiplayer shooter, where you respawn shortly after getting killed, and the player with the best kill/death ratio at the end is crowned the winner. It felt like the mode best suited to the pace of Worms Rumble, with the brief respawn time getting you back in the game fast.

The latter two modes, Last Squad Standing and Last Worm Standing, are essentially different flavours of Battle Royale. Worms Rumble reminded me strongly of Apex Legends, where teams of three must pick a drop point, take down other teams and survive the gradually shrinking map. As with most team-based multiplayer modes, your mileage may vary depending on if you can coordinate well or not. If you can organise two friends to play alongside, then it can be a very fun way to play.

The last mode is Last Worm Standing, which the game suggests you be around level 10 to attempt. It is the most classic Battle Royale-y of the game modes, where it is every worm against each other, with a shrinking map and no respawns. It was certainly thrilling in the few times I could find a match for this mode. That said, considering how short the fights in Worms Rumble could be, you will probably spend more time in the queue than the match.

As someone who grew up with Worms: Open Warfare 2 on the DS, with its single-player Campaign and Laboratory modes, as well as a wealth of customisable maps and rulesets to toy around with, having just three multiplayer game modes at launch feels a bit threadbare. More content-rich single-player modes in Worms Rumble would also have given newer players an opportunity to hone their skills in preparation for multiplayer against more experienced opponents.

Deathmatch is a lot of fun, but the small number of maps and weapons becomes repetitive after a few hours. Sure, Worms Rumble has been released at a budget price point (and is currently free for PS+ subscribers). However, I feel like we will need a drip-feed of more maps and game types overtime to keep people invested. 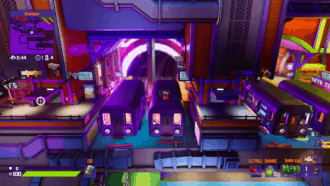 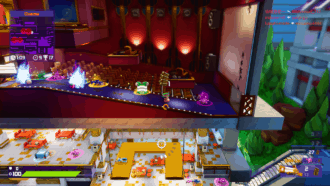 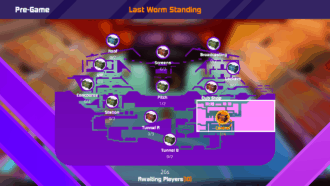 By performing well, you can acquire currency and experience to put towards cosmetic items for your worm. There were no microtransactions or loot box mechanics I could see, which was a pleasant surprise. I was disappointed that a lot of voice options and other cosmetics from past games are not currently available in Worms Rumble. For instance, whatever happened to the ability to choose your worm’s crazy gravestone? Still, it was fun to play around with what cosmetic options we get, and hopefully, more are on their way.

It’s also worth noting that the game is fully cross-play compatible at launch with PC, PS4 and PS5. In fact, at one point my Last Squad Standing squad contained one player from each platform and it just worked seamlessly. A cool feature that will make teaming up with your friends much easier.

Considering Worms Rumble is free on PS+ right now, subscribers have no reason not to download it and see if it’s their kind of game. It is kind of a tough sell to hardcore Worms fans, but it ultimately works quite well. Worms Rumble is a more fast-paced variety of Battle Royale, with a Deathmatch mode thrown in for those who want a more conventional multiplayer experience. The experience is quite a lot of fun, at least for a few hours until the repetition sets in.

However, if Worms Rumble wants to be the new Fall Guys, they need to take note of Fall Guys’ frequent updates that keep the game fresh. Three game modes (wherein only Deathmatch seems to be especially popular) is probably not going to sustain interest for all that long. Hopefully Team17 have some big plans to expand Worms Rumble’s scope over time. Even a greater selection of cosmetic items, and increasing the rate at which they are gained, would add more to the experience.

In the end, Worms Rumble is a nice little surprise near the end of the year. Sure, it’s chaotic, messy, and somewhat lacking in game modes. However, if you’re looking for fast-paced multiplayer fun, then it is a pretty easy recommend.