Explore the lively city of Metropolis with the cast of the popular cartoon in DC Super Hero Girls: Teen Power. Playing as Supergirl, Wonder Woman, and Batgirl, this action game mixes up the crime-fighting with high school antics. First announced earlier this year, this social romp comes from the talented developers from Toybox Inc., but will it keep your super focus?

Based upon the DC Super Hero Girls series by Lauren Faust, the story centres around the lives of the three superheroes and their friends. Demolition robots called “DemoBots” and toys are controlled for evil by an unknown foe, causing chaos in the city. As the mystery unfolds, the teenagers struggle with everyday drama and shenanigans, usually revolving around a fictional online platform called “Supersta” (pronounced “super-star”). Whether it’s embarrassing photos being shared online or fighting over a limited-edition comic book, the story itself is simple yet charming.

“Whether it’s embarrassing photos being shared online or fighting over a limited-edition comic book, the story itself is simple yet charming.”

Supersta itself is a fun and simple photo mechanic that gets players taking pictures of their encounters and hidden items for followers, likes, skill points, and currency. People around town will give you hints of trending items to take photos of, and when you share via Supersta other characters will post generic comments. As a game for kid’s trying to teach a message, there is a concerning amount of superficiality. Everything in this world seems to revolve around popularity on Supersta. People will not speak to you and cosmetic items won’t unlock until you have a certain amount of followers or likes. There is even a side-quest where a stalker wants you to take a picture of a visibly concerned man.

Albeit, there are some well-directed messages for influential children. One chapter involves Supergirl failing in a fight where Livewire sneakily takes a photo that goes viral. Metropolis citizens begin to bully her, and her super hearing does not make life easy. She decides to visit town as Kara Danvers and talk to Supergirl fans to raise her spirits, indirectly encouraging her not to get caught up in what others think. Narratives like this are sprinkled throughout DC Super Hero Girls: Teen Power, but reliance upon social media vanity certainly detracts from the positive morals. 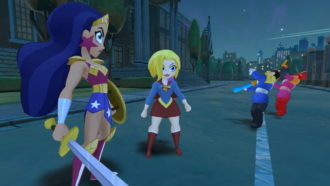 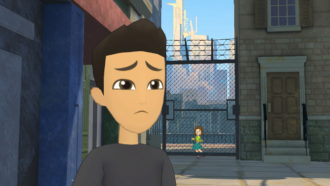 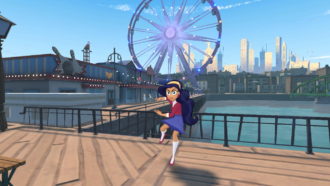 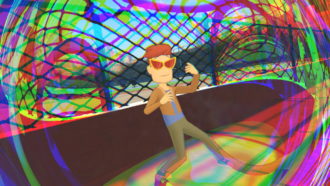 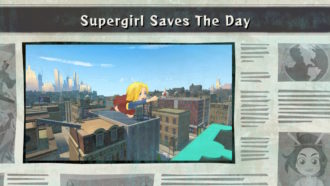 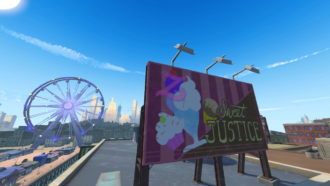 All your favourites at Metropolis High

While clearly a kid’s game, familiar faces and lore from the DC Universe will have fans rapt. You’ll meet Zatanna, Bumblebee, Catwoman, Livewire, Lena and Lex Luthor, Toyman, and more throughout the game. They all have distinct personalities, secret identities they somehow keep from each other, and are voiced by the incredible actors from the TV show. Tara Strong always does a terrific job as both Batgirl and Harley Quinn, among other talented people like Nicole Sullivan, Mallory Low, and Grey Delisle Griffin.

Teen Power plays like a 3D action collect-a-thon. With the three playable characters and additional to unlock, the teenagers explore a group of open-world areas to complete missions, take photos of “hidden” logos, and collect items like mascot hamster toys. As the game progresses, the districts will gradually expand and more quests will become available. While not intricate in level design, there are elements of verticality and lore to these spaces that encourage you to take a break from the main tasks to investigate and say hello to Metropolis citizens. Taking photos of the same, obviously placed, symbols does get old very quickly. However, the amusing people of Metropolis do have funny things to say, making you want to try and speak to everyone.

Generating points and followers from Supersta photos and battles unlock outfits and buildings for the characters to buy. Clothing customisation options aren’t very inventive, despite the deep source material. There is only a handful for each character and it almost feels like palette swaps. It doesn’t scratch that slice of life, fashionista itch that you may get from The Sims or the infamous Bratz Rock Angelz game. Buying buildings to help rebuild the destructed Hob’s Bay precinct is similarly dull. Rebuilding the zone paints itself as a city planning/management mechanic but is purely just a device for some of the more boring battles in the game. Constructing a building leads to a straightforward defence mission that generally isn’t too exciting compared to the rest. Shopping for clothes and city-building are a hollow shell of what could have been fantastic. 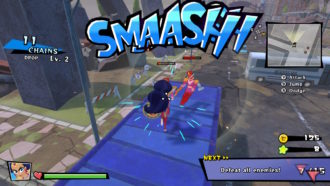 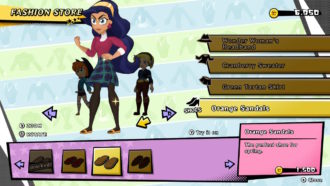 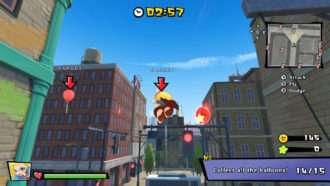 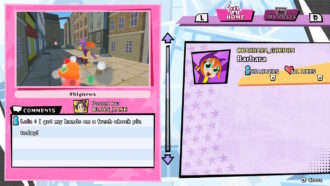 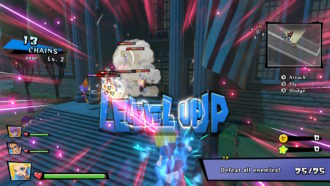 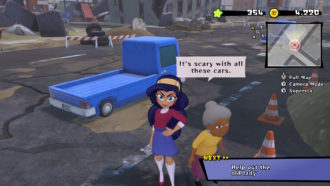 In combat, DC Super Hero Girls: Teen Power starts mind-numbingly basic but grows with time. Initially, it’s a three-button beat ’em up: attack, jump, and block. Smash the button as many times as possible and win. There are no cancels and striking actions linger on a fraction too long, making attacks feel sticky or sluggish. As experience stars are gathered, the teenage superheroes’ can get new skills and buffs.

Batgirl unlocks explosive Batarangs and a zipping grappling hook, to both attack from a range and close-in on enemies. Wonder Woman has her shield, which doubles as a jumping-pad, and the famous Lasso of Truth. Supergirl can unlock Heat Vision and Super Breath. Quickly, the gameplay rivals the action of Devil May Cry or Bayonetta, racking up hit combos and building metres for devastating super attacks. Admittedly, it’s still a streamlined version of those legendary games, but it’s complex enough to be family-friendly and not wholly condescending.

“DC Super Hero Girls: Teen Power has a great range so anyone will enjoy beating-up villains.”

The enemies certainly don’t hold back, either. Combat within the main missions isn’t overly complicated, but select side-quests will test the superheroes’ ability to dodge and weave. I found myself having to come back to a few optional battles as I was too underpowered for the maniacal giant toys shooting homing fireballs of doom and alien spaceships with barrages of blistering lasers. A variety of different enemies, all with alternate versions that are either larger or colour swaps with additional attacks keeps the action fresh. Even boss encounters at the end of each chapter are always mixing-up fights. In one, you might be taking down electric lampposts to stop Livewire from recharging and another you’re leading Giganta away from a friendly robot. Happily, DC Super Hero Girls: Teen Power has a great range so anyone will enjoy beating-up villains.

One of the most significant issues with the gameplay is the camera. Unfortunately, as with many 3D action games, the player camera will often get stuck or clip through the environment when trying to squeeze through tight arenas. It’s most notable when flying and zipping around more bustling battles, where fast movement doesn’t always suit how slowly the camera moves. It isn’t a game-breaking issue, but those familiar with action combat will find it frustrating.

Another concern is the performance of the game. Playing on the Nintendo Switch and specifically in handheld mode, Teen Heroes consistently drops frames. Choppiness during busy fight sequences, especially the harder ones, isn’t a fun time. While the system hardware obviously isn’t the best, this colourful game doesn’t showcase RTX technology with DLSS at a whopping 4K resolution. The game itself isn’t visually impressive anyway, with some very low-resolution textures and the most basic lighting and shadow effects. The humble Nintendo Switch tussles with the excitement of Persona Strikers and Hyrule Warriors, so these performance issues are the result of poor optimisation.

Impressively, this superhero action game isn’t just a cash-grab, shovelware release for kids. Batgirl, Supergirl, Wonder Woman, and friends are charming representations of their cartoon and comic-book counterparts with heaps of flair. The slice of life elements are decent, with humorous stories and meaningful drama peppered throughout, but not without superficial parts. Exploring the handful of open-world levels invites plenty of picture-taking and collect-a-thon fun, even if the rewards aren’t much more than levelling up, shopping for lacking clothing options, and a poorly implemented city-building mechanic. On the other hand, combat is addictive with notable scalability and satisfying skills to decimate an array of pesky robots and possessed toys across varied missions. Altogether, DC Super Hero Girls: Teen Power is a surprisingly entertaining action and social game for the whole family.