With the return of the mainline Monster Hunter series to Nintendo consoles, it only makes sense for its cult classic turn-based spin-off to get another chance at the limelight. Monster Hunter Stories 2: Wings of Ruin puts you in the shoes of a Monster Rider, rather than a hunter, who befriends and rides the series’ iconic beasts… in addition to hunting them down because you still do a lot of that as well. While some design decisions and performance issues might not make it the perfect recommendation for those looking for their next monster-catching fix, Monster Hunter Stories 2 still has a ton of charm to spare.

Despite the 2 in the title, don’t feel like you need to have played the first game on the 3DS to understand this one. Starting out as a fledgling Rider, you are driven out of your community and sent on a trek across multiple regions when you come across a mysterious Rathalos egg. Prophesised to eventually grow up to become Razewing Ratha, a being of chaos and destruction, you take it upon yourself to raise him on the right path while investigating strange lights that drive monsters berserk.

It’s a fairly basic narrative, but effective. While the game’s pacing is initially bogged down by seemingly endless flashbacks, once Ratha hatches and the narrative’s core focus of raising and protecting this dragon creature becomes clear, I became a lot more invested.

Although that said, I could have done with less of Navirou, your wisecracking Felyne sidekick. While his presence in the story is nominally justified by being the person who speaks for you (your player character being mute, as per series tradition prior to Monster Hunter Rise), I just found him really obnoxious for the most part. Maybe it is because he is incredibly full of himself despite having little gameplay impact, and is often more of a liability in cutscenes than an aid, but I really wish he had just stayed back on the island. While snarky animal sidekicks is a not-uncommon trope in JRPGs (see also Teddie in Persona 4 and Morgana in Persona 5), Navirou is possibly the most annoying version of that concept I have encountered yet.

Where Monster Hunter Stories 2 differs from the mainline series is that once you touch a roaming monster in the overworld, you are then transported to a turn-based battle mode. Attacks and most abilities are separated into three types: Power, Speed and Technical.

They have a rock-paper-scissors kind of relationship, with an omnipresent triangle on-screen reminding you of which counters which. The 6 available weapon types all deal either Piercing, Slashing or Bludgeoning damage, which different monster parts may resist or be vulnerable to.

In a nice touch, the game lets you know who your opponent will target next turn, and which attacks they are likely to favour. If you and your opponent target one another, you engage in a Head-to-Head, where you stand to deal lots of damage and negate an enemy attack if you pick the move type that counters theirs.

Succeeding in enough Head-to-Heads charges up your Kinship metre, letting you carry out devastating and visually spectacular Kinship Skills. There was an appealing mix of strategy and guesswork at using the information provided to predict the enemy’s next move and choose the best counter. This is especially potent later on when enemy monsters change up their strategies mid-battle to keep you on your toes.

You directly control your hunter’s actions in combat. You also have an indirect level of control over your Monstie (what friendly monsters are called here), where they mostly act on their own, but you can pick special moves for them. However, at almost all times, you are tagged along by an AI partner called a Buddy. Your Buddy has their own Monstie and acts totally independently of you.

Fortunately, this means they don’t use your items or count towards your lost Hearts when they go down. However, this has the downside of having no control over half of your party, and no way of stopping them from favouring Piercing attacks against a monster that resists it, or Speed attacks against a Technical-favouring opponent. Instead of having a Buddy and their Monstie fight alongside you, I don’t understand why the game doesn’t just let you use three Monsties at once. At least that way you would have a lot more control over your party.

There’s also plenty to do outside of combat. In addition to their combat capabilities, your Monsties all have Field Skills that they can use in the overworld. These range from traversal abilities to access new areas, like Ivy Climb, Swim or Jump, to more foraging-focused skills that highlight certain resources on the minimap. It made it fun to try out Monsties I would not otherwise have considered due to a particularly useful Field Skill. Also dotted across the map are Monster Dens, which are how you can add to your Monstie roster.

The Monstie Dens are very short, procedurally generated dungeons kind of reminiscent of The Legend of Zelda: Breath of the Wild’s Shrines. After making your way to the monster nest, you can forage for an egg to take back home and raise as your own. While it at first seems quite random as to what kind of Monstie you will get, Monster Hunter Stories 2 gives you several tools to ensure you get what you’re looking for. These include being able to tag and track particular monsters so that you can follow them to their den and snag one of your own. There are also visual clues to indicate if you have a particularly rare egg on hand.

Unfortunately, this process plays into the other annoyance of Monster Hunter Stories 2’s design, which is the grind. All of your Monsties hatch at level 1, and must be levelled up to match the rest of your party.

There are tools to mitigate the tedium, like Expeditions to mass-level your reserve Monsties, easily repeatable foraging sidequests and your whole party getting battle experience even if they did not directly participate in combat. Still, the grind makes adding new Monsties to your active party a chore and kills the pacing stone dead when bringing new Monsties up to speed.

That’s not to say there aren’t other interesting ways of buffing your Monsties in Monster Hunter Stories 2. All of your Monsties have Genes set out in a 3×3 grid. Through the Rite of Channeling, you can give one Monstie’s gene to another, giving you an additional use for your lower-tier Monsties. It gave me control over my party’s capabilities, and let me upgrade my Monsties to my liking.

Speaking of the Monsties, they really are the stars of the show. The intricate designs and animations of the titular monsters in the Monster Hunter franchise have been crucial elements in the franchise’s appeal, and Monster Hunter Stories 2 really lets them shine now that you aren’t actively trying to hunt down every one that you see.

From their adorable baby forms after they hatch to the varied, awesome and sometimes hilarious Kinship Skills, the monsters look great. Even Congala, the giant ape that kills its enemies by farting at them, is very appealing. It also migrates the “rage mode” element of the main games, where certain enemy monsters would gain more intricate design elements when they took enough damage, which was a nice touch. Furthermore, having the game’s fast-travel system involve assistant Felynes picking you up in a cart and roughly dumping you back at the town entrance never stops being funny. 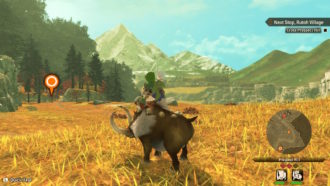 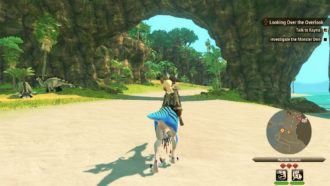 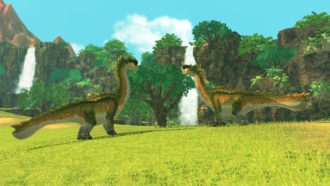 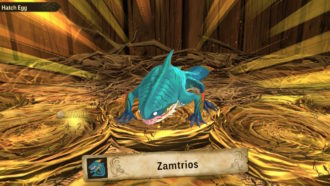 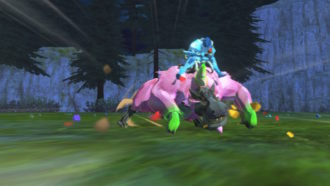 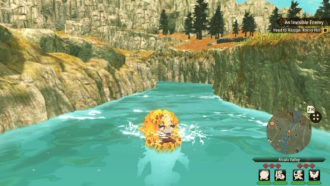 I also liked some of the other aspects from the mainline games that were present in Monster Hunter Stories 2. Many items from the series maintain their functionality here. These include using Flash Bombs to stun flying enemies, or Paintballs to stalk a fleeing opponent. You also have three opportunities to come back from losing all your health before you are kicked back to town to start again.

Like the mainline games, you can use parts from defeated monsters to craft new weapons and armour, to keep your Rider competitive with their Monsties. Admittedly, keeping the whole “slaying monsters for their parts” angle does become a little incongruous with this entry’s more child-friendly tone; you wouldn’t get that sort of thing in Pokémon. Still, that “gotta-craft-’em-all” element is one of my main draws to the Monster Hunter franchise, and I’m glad it’s here.

Unfortunately, despite the lovely monster designs and some rather picturesque environments, the game is plagued by some unfortunate performance issues on the Switch. This is particularly acute in crowded villages or the more open sandbox areas; whereas the frame rate is more stable in the smaller dungeons and battles, fortunately. It’s possible the game’s poor performance is partly due to the game’s simultaneous PC release. Although whatever the reason, the frequent drops below 30 FPS are rather noticeable and jarring. Hopefully, performance improvements will be patched in later on.

Monster Hunter Stories 2: Wings of Ruin is somewhat imperfect, but the flaws don’t quite eclipse its strengths. Despite the annoying party AI and grind, the combat has the right level of tactical depth I would expect from a turn-based Monster Hunter game. With its adorable Monsties and a wide-open world to explore, gamers looking for a new JRPG to dive into can certainly do a lot worse. As long as you are prepared for some irritating supporting cast members and a somewhat repetitive gameplay loop, fans of the monster-collecting genre will get a lot out of this game.