Reverie Knights Tactics will certainly scratch a particular itch for fans of turn-based tactics games in general. Its mix of strategy and visual novel gameplay is likely to appeal to a particular subset of player, however its slow pace and simplistic RPG mechanics may start to grate by the end.

A journey to uncharted lands…

In Reverie Knights Tactics, the fabled Elven city of Lennórien on the distant continent of Lamnor has fallen to the hobgoblin horde. All efforts to investigate what happened and recover the lost Elven knowledge have thus far failed. After protagonist Aurora’s father vanishes on an expedition to Lamnor, she travels alongside her best friend Brigandine to locate the original expedition and reach the lost city.

It’s a simple-yet-compelling enough premise to fuel the game’s 10-15 hour runtime. The party is eventually joined by Elven scout Fren and golem Hellaron, each of whom have their own unique motivations regarding the mission. One small touch I enjoyed was the Order and Chaos system, a sort of moral alignment mechanic influenced by dialogue choices.

It isn’t so much Good vs Evil as it is Mass Effect‘s Paragon vs Renegade, with Order choices being based around discipline and restraint vs Chaos choices being more emotional and selfish. Admittedly, I wish these choices were telegraphed better; while some choices make sense, others could seem counterintuitive as to which alignment would be impacted. For instance, an early choice to hide from monsters and avoid detection with an invisibility scroll is considered a Chaos decision, whereas revealing yourself and getting into unnecessary conflict is more Orderly, apparently.

The impact on the narrative is fairly minimal aside from characters occasionally remarking on how disciplined or opinionated Aurora has become. However, it has gameplay effects too, such as certain abilities becoming available earlier depending on alignment. I appreciated the potential replay value there. That said, a better heads-up as to which choices will swing Aurora towards Order or Chaos would be appreciated. 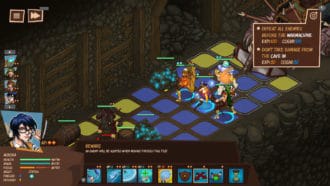 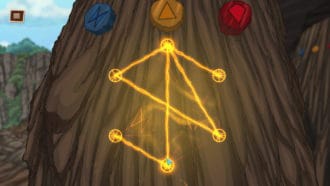 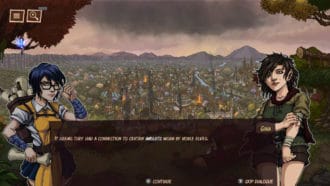 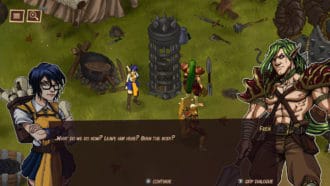 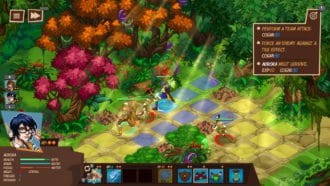 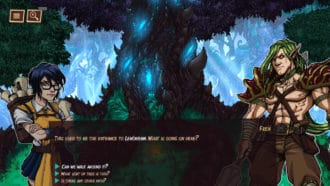 It’s time to get tactical!

Not long after landing in Lamnor, you’ll be introduced to the combat system in Reverie Knights Tactics. It’s a turn-based affair, bringing to mind various mechanics from games like Fire Emblem, Into the Breach and Final Fantasy Tactics. The player ultimately only obtains 4 party members in total. It sounds rather restrictive, however as they fill the crucial roles of long-range fighter, tank, close-range fighter and healer, I didn’t really feel like I was missing anyone.

“Along with stage hazards and a multitude of status effects that could be inflicted on foes, there are plenty of options to choose from.”

Characters have two ability points each turn, which can be either used to move, attack, use an ability or item. If you attack without moving, your abilities are more powerful but use up both points.

Positioning is very important; not only can characters be backstabbed by attacks from behind, players can also set up Team Attacks by positioning two or more allies around the same enemy. Along with stage hazards and a multitude of status effects that could be inflicted on foes, there are plenty of options to choose from.

While it can take some time to get used to the mechanics in Reverie Knights Tactics, before long they will click into place. Each level has a number of optional objectives, such as landing a Team Attack, pushing an enemy into a hazard or defeating foes in a certain order. As there are (admittedly fairly inconsequential) in-game rewards for accomplishing these objectives, I found it irritating that levels could not be re-attempted after finishing them once.

This was likely for balance reasons to prevent an over-levelled party from returning to earlier stages to steamroll over them. Unfortunately, the end result was that it slowed the pace of the game right down, as anyone seeking to complete those objectives would not be able to proceed through the story until they have completed the level fully.

Speaking of slowing the game down, the combat animations could stand to be a bit faster. There is an option to speed up the animations, but despite this, even when sped up, they are too slow. Hellaron’s walk speed alone feels glacial, let alone some of the enemy animations. The character animations themselves are fluid and detailed, particularly for the Team Attacks. The downside is that this level of detail ends up impacting the game’s flow over time.

There are a finite number of encounters in Reverie Knights Tactics, with no random encounters or replayable stages. This became a problem because you do not automatically recover HP or mana points between fights. You do fully recover when you level up, but this becomes less frequent as you near the endgame. On one hand, this created a compelling resource management meta-game, and encouraged me to actually use the healing items that I’d probably otherwise hoard and forget about.

The downside of this is that it can lead to Reverie Knights Tactics becoming potentially unwinnable in the event that your party is too beaten up to complete the next level and you don’t have enough resources to craft more healing items. It often doesn’t feel fair when your enemies are starting every fight at full health, and you aren’t. You also cannot revive downed allies mid-fight, making initial tactical mistakes hard to claw yourself back from. Some sort of passive healing between encounters, free source of healing items or an option to reattempt a fight with full health after losing, might make the game more approachable for those who still want the challenge of the normal difficulty mode but have accidentally backed themselves into a corner.

In Reverie Knights Tactics, you have a variety of ways to customise your party, a lot of which I liked. You have three stats to upgrade: Might, Finesse and Defence. While the game does explain what each stat is used for, it could have done with more stat options to make the player think a bit more with their allocations. There is no option to reallocate points or abilities, which is disappointing.

Combined with the finite battles, it just adds to ways that players could end up stuck due to bad choices with no means of recourse. Players can at least also equip items which augment various stats further, giving some on-the-fly methods of redistributing stats.

Aside from combat and cutscenes, Reverie Knights Tactics does include some additional puzzles and minigames to mix things up somewhat. There is a kind of hidden object side activity where crafting materials can be collected by clicking them with your cursor in hub areas. It gave an opportunity to appreciate the game’s pleasant and vibrant art style, at least.

That said, while the lockpicking minigame is decent and other puzzles are straightforward, the objective of a puzzle around halfway through the game involving copying runes on Elven amulets could definitely have been better explained.

Reverie Knights Tactics is a decent turn-based strategy RPG that fans of the genre will likely enjoy… for the most part. The Order vs Chaos system and optional side-quests provide additional depth to the game’s plot. Furthermore, the strategy gameplay fundamentally works very well, encouraging thoughtful planning and smart use of stage hazards. However, its balance issues, primarily the lack of post-combat recovery and limited character customisation and re-spec options, can lead to Reverie Knights Tactics’ gameplay wearing on you over time. It’s an imperfect game, but there are enough neat ideas to be worth checking out.