I am not well versed in the kart racing genre, but I did spend most of the recent holiday period playing Mario Kart 8 Deluxe with my nephew. With 4-player splitscreen, the whole family got in on it, and with dozens of characters and tracks, we never got bored. So I was thrilled when I first heard about Chocobo GP. At a glance, it looks like a not-so-subtle clone of Mario Kart with racers and worlds from across the Final Fantasy canon. What a fantastic way to indoctrinate the kid into my favourite media franchise, I thought, being the terrible uncle I am. Now that I’ve played it, it wasn’t entirely what I expected. Chocobo GP is an entertaining racer that definitely has the potential to stand up to those mean Italian plumbers, but it’s wrapped in a package that makes me wonder who its target audience is.

The first place you’ll want to go is the game’s Story Mode, which gradually introduces the game’s mechanics, which I found quite familiar. Select your character and take off in arcadey and accessible racing as you compete against a roster of characters each equipped with individual abilities. If you drift for long enough whilst racing, you get tiered speed boosts, and you get a boost if you accelerate when the starting countdown hits 2. While these are clearly borrowed mechanics from Mario Kart, I appreciated Chocobo GP actually giving me tutorials for them, and I found them less punishing in practice. Chocobo GP is a very approachable racer for filthy casuals like me and my family (sorry mum if you’re reading this).

Another borrowed, tweaked concept is Magicite, Chocobo GP’s take on powerup items. Driving into Magicite grants you a classic Final Fantasy spell, such as Haste, which makes you go faster, or Fire, which throws a fireball in front of you. The almighty dragon Bahamut is functionally Bullet Bill. You can hold up to three spells at once, but if you get two or three of the same spell, they merge into stronger forms. These upgraded spells are far more effective (for example, Fire grows larger and homes in on targets) so there’s a level of strategy involved when deciding if you should shoot now, or wait for an upgrade.

The spells themselves are utterly chaotic. My personal favourite is Swap, which teleports you to a spot further along the track, but leaves entry and exit portals behind you. If another player is fast enough, they can jump into your entry portal before it closes. There were also several times when I accidentally skidded into someone’s exit portal, sending me back to where they started. Even playing solo, the AI relentlessly flings spells around you, so you need to do the same to keep up. At its best, races are exhilarating, and unpredictable in the best way.

The downside is just how powerful those upgraded spells get. During Story Mode (which I mostly played on Easy) there were several times when a level 3 spell stunned me for so long I went from 1st place to 7th, and found it impossible to regain my lead. A couple of times this happened right at the final finish line. Considering these story missions are mandatory to unlock every character and track, winning races seemed random at times.

What helps make the difference is the characters themselves. While each has stats (each racer comes with their own vehicle), what matters more is their unique abilities. Each character’s special gauge slowly builds up over time, and lets them perform a move that can turn the tide just as much as the most powerful Magicite. Our protagonist, Chocobo the chocobo, turns briefly invincible. Another character lets you spend bits of her special gauge for little bursts of speed, perfect when I need to recover from my mistimed drifts. Each of Chocobo GP’s 20+ characters plays differently, so there’s a lot of variety here.

The story itself is a mummer’s farce, following Chocobo and his friends as they travel the world in search of a magical race that grants wishes. It’s harmless kid-friendly nonsense, filled with deepcut Final Fantasy references (reFFerences) that seemingly exist just for me and nobody else. The real benefit of Story Mode is unlocking all the tracks and racers. A few characters will join your roster directly, but the rest will need to be unlocked from the in-game shop with “item tickets”, a form of currency.

Item tickets are earned by collecting little crystals across each race, or completing optional Story Mode objectives. Whether or not you win a race, a gauge will slowly fill up to grant you item tickets. Unlocking characters, different vehicles, and customisation options all require item tickets, and even though you’re always making progress towards getting them, they are obtained much slower than I would like. Even after finishing story mode, there are still a bunch of characters I have yet to unlock.

“Chocobo GP’s mechanics make it a very approachable racer for casuals like me.”

Going through Chocobo GP’s other modes brought attention to its most unforgivable aspect: it’s only got 2-player splitscreen. I understand this is only a problem for people who mainly consume the genre with others in person, which is understandably not for everyone. The game has got time trial races and the requisite tournaments where you have to complete 4 races at a time, though Chocobo GP is clearly designed around online play. Its most notable feature is Chocobo GP Mode, which is a whopping 64-player tournament. This was not made available to us during the review period, but it seems mighty impressive. Taking a cue from 2020’s Final Fantasy Crystal Chronicles Remaster, Chocobo GP (the game, not the mode) comes with a Lite version, a free edition of the game you can download to race against someone with a paid copy. The Lite version only gives you access to a handful of characters and tracks, but it’s a nice way to try before you buy. But the more I played Chocobo GP, the more I started to wonder why anyone would need to pay for it at all. 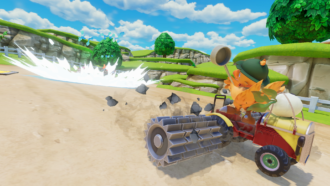 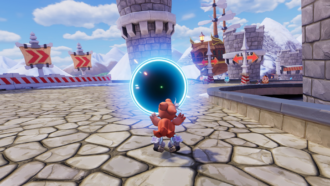 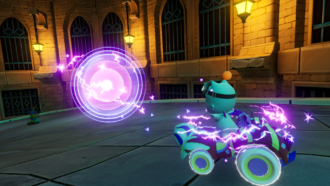 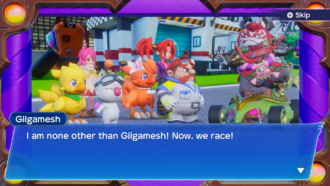 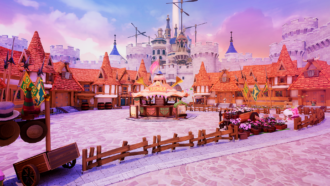 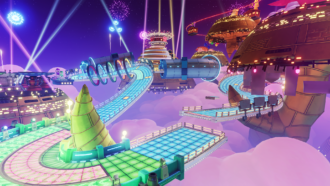 It’s disappointing that a third of the playable characters are from the obscure Chocobo spinoff games, most of which were never released in the West and the most recent came out in 2012. Others are either original to this game or cutesy renditions of classic Final Fantasy summons (Ifrit is a firefighter, Shiva is a ski instructor, and so on). But if you’re here to play as beloved party members from across the franchise, you’ve got FF6 protagonist Terra, and FF9’s Vivi and Steiner. That’s it. There is a baffling missed opportunity to include more characters that fans and newcomers would recognise, which renders Chocobo GP’s fairly sizeable cast unmemorable.

Chocobo GP’s racetracks thankfully represent more than two Final Fantasy locations with FF7’s Gold Saucer as the Rainbow Road stand-in. The problem is that there are only 8 tracks in total to race on. Technically there are 21 tracks, as the 8 tracks are remixed into multiple arrangements (short version, long version, technical version with more traps, etc.), but the game grows dull fast when you’re racing through one of the same 8 backgrounds in every race. Even the implementation of the remixes is inconsistent, as 1 beautiful city track only has 1 configuration, but the final unlockable track has 6.

This dearth of content makes more sense after knowing that Chocobo GP will be using a Fortnite-style battle pass system. Every couple months will host a new season, where playing online will grant you a currency called gil with which to buy limited-time rewards to add to your game, like new tracks and characters (in season 1, you can buy Squall from FF8 with gil). The final type of currency, mythril, is used to obtain even more exclusive rewards (in season 1, it’s Cloud from FF7), and as of now, mythril can only be purchased with actual money.

Season events are held every few months in #ChocoboGP!

Play in Chocobo GP mode to increase your season level and obtain special season rewards, like items and Gil which can be exchanged for various other items in the games different shops depending on your season level. pic.twitter.com/jDEhmFe6IC

I don’t necessarily have an opinion on seasonal passes in free-to-play games that let players spend money if they want to, but Chocobo GP is a full-price title that also requires a Nintendo Online subscription to access any online content. To then put players in a position where they’d need to either grind races repeatedly or spend even more money to unlock stuff feels like a poorly thought out decision on Square’s part. I can’t imagine Chocobo GP’s current model being sustainable long term without making the base game free and removing the need for Nintendo Online, like Fortnite and Rocket League on Switch. This appears to be Square Enix dipping their toe into a distribution model they’re unfamiliar with, and they either didn’t do their research or are aiming for a merciless cash grab. Either way, the handling of microtransactions is a massive letdown that looms large over the entire game.

One final problem with Chocobo GP that I simply can’t ignore: the song. The game’s theme song plays on repeat throughout most of the menus. It’s an upbeat pop song, a catchy earworm (big Baby Shark vibes), which normally I don’t mind. But if you listen to the lyrics, you’ll realise it’s just a list of the characters and spells in the game, followed by a description of what racing is like. It’s inane, and never ends. The only way to turn the song off is by muting all music, which means you miss out on the excellent genre-appropriate remixes during races. The song is not the worst part about Chocobo GP, but I hate the song.

Chocobo GP could’ve been a simple kart racer that draws players in with beloved characters and tracks from the history of Final Fantasy, but instead, Square Enix boldly chose to make a sequel to an unpopular PS1 game. Bolder still was the choice to gate the promise of a more interesting game behind season passes and premium currencies. Mechanically, Chocobo GP is sound, and has enough ideas and potential to stack up to other franchise racers. However, I’m anxious to see how long this game lasts after release. There’s every chance it’ll develop a loyal playerbase large enough that Square will continue to support it, and maybe even rebalance the game to make that price of entry less steep. But as it stands, I don’t think Chocobo GP offers enough at launch to justify the effort and money required to keep playing it.