When Stranger of Paradise: Final Fantasy Origin was revealed last year, strange is certainly a word that it conjured in many gamers’ minds. A prequel to Final Fantasy, starring a gruff, no-nonsense original character whose defining trait revolves around killing Chaos, with a dark and edgy tone far removed from the idealistic high fantasy of the original game? Developed by Team Ninja of Ninja Gaiden and Nioh fame, of all people? While such a premise and pairing are certainly unorthodox, the end result is a surprisingly compelling action game with DNA from Final Fantasy and Team Ninja’s other titles that may appeal to both groups, even if it certainly has some imperfections.

A new origin for a classic game

Stranger of Paradise: Final Fantasy Origin follows Jack, a mysterious and not particularly sociable fellow who shows up at Castle Cornelia with two of his friends claiming to be a Warrior of Light. With no memories aside from a burning desire to kill Chaos, he voyages to various familiar Final Fantasy locales to hunt down the four Fiends and find Chaos so that he can kill it and fulfil his purpose.

If the ridiculous self-seriousness of Stranger of Paradise: Final Fantasy Origin’s reveal trailer repelled you, then you won’t find much to gravitate to in the game’s plot. It develops some more complexity later on when the game attempts to justify why the main cast mostly lack characterisation outside of the nebulous goal of killing Chaos. However, that doesn’t help the fact that the story and characters are so flat and uninteresting that Jack is constantly interrupting bad guy monologues or otherwise expressing a puzzling lack of interest in his companions, the world around him, or anything not directly related to killing Chaos. Noctis from Final Fantasy XV‘s sullen exterior belied a heartfelt relationship with his friends and goofy sense of humour, whereas Jack has all of the 90’s anti-hero rage, and none of the depth. 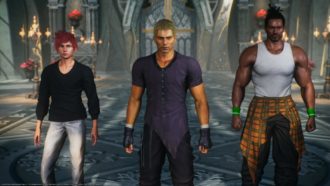 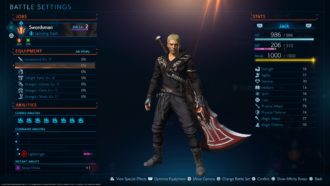 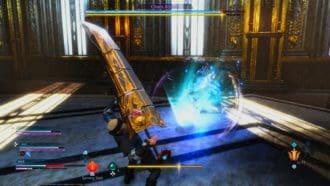 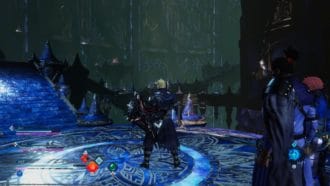 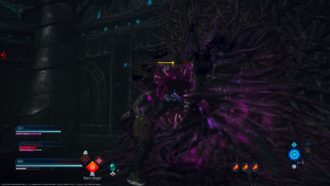 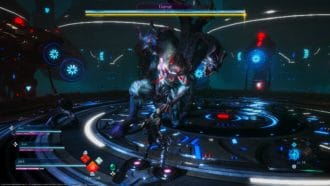 Jack of all trades

Even if the story isn’t exactly Shakespeare, Stranger of Paradise: Final Fantasy Origin at least gets by on its combat. Nioh 2 veterans in particular will notice some similarities with the way this game plays. Jack and two of his companions hack and slash their way through various familiar locales, resting at save points to restock your limited potion capacity in a somewhat Soulslike fashion. In addition to regular attacks, Jack can absorb abilities from enemies by guarding against them, as well as use various special attacks based on his equipped Job. Although regular enemies probably won’t trouble players accustomed to action games, Stranger of Paradise’s bosses put these mechanics to the test, and were all challenging and memorable experiences. Fortunately, Stranger of Paradise is a lot more merciful than the Nioh games; you don’t lose accumulated experience on death, and there are easier difficulty settings available for players who are more invested in the plot.

Furthermore, while this game’s setting does take most of its influence from the original Final Fantasy, its levels take inspiration from all over the franchise. While it is sort of loosely justified as part of the game’s weird meta-plot mostly told via text-based info-dumps, the end result is getting to hack and slash through stages based on Final Fantasy III’s Crystal Tower or Final Fantasy XIII’s Sunleth Waterscape, and I’m perfectly fine with that. If you’re a Final Fantasy veteran, rest assured that this game brings the fanservice.

“Stranger of Paradise’s implementation of the Job system is deep and compelling.”

The Job system has been a hallmark of many a Final Fantasy title. Stranger of Paradise’s implementation of the Job system is deep and compelling. Starting off with a handful of basic Jobs, which impact which equipment you can wear and which abilities you can use, you will eventually unlock several more as you progress. Similarly to Final Fantasy Tactics, many Advanced and Expert Jobs require you to have mastered other Jobs, leading to an intricate sense of evolution as you level up your Mage Job to then develop as a Black, White or Red Mage, depending on preference.

Jack can equip two Jobs at a time, and switch between them at the press of a button. Jack gains the stat bonuses of both of the Jobs he has equipped, making figuring out good Job combinations a fun puzzle. I paired the White Mage and Berserker together, allowing me to cast Haste and Regen on myself, and then go Berserk and turn the enemy into mincemeat, with the Regen effect compensating for the Berserker’s inability to consume potions.

The loot system could probably stand to be better. Not unlike Nioh, Stranger of Paradise: Final Fantasy Origin boasts a Diablo-esque loot system where every enemy slain drops new weapons and armour for Jack and friends to equip. It’s a neat idea in theory; each equipment piece looks visually distinct, with different equipment pieces synergising with different Jobs and possessing special bonuses.

With enough time and effort, you could hypothetically craft the perfect build for your playstyle. That said, somewhat tight inventory limits and a difficult-to-navigate user interface make utilising this system harder than it needs to be.

You can just press the touch-pad to auto-equip whatever your best gear is. However, it just selects your highest-level gear, not taking into account Job-related bonuses or that different Jobs benefit from different stat allocations. Plus, you get so much loot that manually sorting through it would take all day. As such, you can either spend ages sorting through your items to micromanage everything while the game dumps a dozen new swords and breastplates on you after every encounter, or you can let the AI pick your loadout and have more fun participating in the combat at the expense of not being as optimised as you could be.

The game also feels like it is crying out for some sort of layered armour feature like in the recent Monster Hunter games, where you can select equipment for its appearance independently of its stats. The fact that Final Fantasy has several very iconic designs for its jobs, such as the White Mage’s hood, the Ninja’s mask, or the Red Mage’s wide-brimmed hat, but penalises you for choosing to wear them if they’re not your most high-levelled equipment, takes some of the fun out of unlocking new Jobs when it doesn’t allow you to dress up Jack in those iconic outfits.

A map screen probably wouldn’t go amiss either. Stranger of Paradise: Final Fantasy Origin takes further cues from Dark Souls and Nioh in its intricate level design, where there are often multiple directions to travel, and shortcuts are unlocked to link back to save points.  Unfortunately, it becomes rather easy to get lost, with its somewhat samey and claustrophobic level design and lack of landmarks. Even a basic compass to indicate the path forward would likely have improved the game’s flow and made navigating its levels a bit simpler.

While Stranger of Paradise: Final Fantasy Origin is a totally serviceable experience solo, it’s definitely crafted for multiplayer. You can team up with two other players to take on the game’s challenges. Not unlike Dungeons & Dragons: Dark Alliance, multiplayer participants get perks that solo players don’t, such as the ability to be revived by allies or use Phoenix Downs. It isn’t quite as punishing on solo players as that game was; at least in Stranger of Paradise, Jack still gets AI companions. Having played mostly solo, with a few multiplayer outings, I had a lot of fun playing with my friends, so be sure to try out the multiplayer if you can.

With Stranger of Paradise: Final Fantasy Origin, Team Ninja has produced yet another rather good Final Fantasy action game. With its deep yet more forgiving combat system, it can appeal to those not seeking the challenging experiences of something like Nioh. Furthermore, with its complex mix-and-match Jobs system, it brings a uniquely Final Fantasy flair to the hack-and-slash genre. Unfortunately, its dull protagonist and plot may struggle to keep the attention of anyone curious about the backstory it is trying to create for the original Final Fantasy. The loot system could also do with some overhauls. Still, you can certainly do worse than Stranger of Paradise: Final Fantasy Origin if you’re looking for a new multiplayer action game with some clever Final Fantasy twists.