Digimon Survive has been through a rough development. Initially announced in 2018 to celebrate 20 years of Digimon, the visual novel suffered multiple delays due to a global pandemic, a complete studio switch, and an engine overhaul. Now celebrating the 25th anniversary of the anime, Digimon Survive offers an engaging story in the beloved world with familiar characters and series surprises.

A school camping trip goes horribly wrong when Takuma Momozuka and a group of teenagers become lost and stranded in a strange world with monsters—some dangerous and others friends. Struggling to find their missing friends and any signs of civilisation, they must survive with their newfound Digimon allies against evil monsters.

The group all have quirks and personalities that fall into the conventional anime tropes; Aoi Shibuya is the logical and responsible friend, Minoru is the optimistic and joking sidekick, and Ryo is always upset. While they aren’t entirely original, they all have decent character arcs and plenty of dialogue. Even the annoying characters might pull on the heartstrings, especially if they die.

As they fight back home through an animated world of decision-making and tactics battles, Takuma and their friends make choices that impact their lives drastically. Takuma will side with one of three options at each choice opportunity: Harmony, Wrathful, and Moral. For example, siding with Minoru to explore the unknown world when Ryo sees no hope and wants to stay in their current position will influence how the story plays out. Sometimes it’s a slight divergence like another battle or snippet of information; on the other hand, it can mean the loss of a friend along the journey.

Ultimately, the choices make a significant impact from Chapter 8 onwards. Takuma will need to consider many outcomes to make the right decision. However you play, you’ll likely be satisfied with the ending you get as they all involve a dramatic climax. There is even a “true” ending that’s only unlocked if the game is played again on new game plus. While Digimon Survive is admittedly more visual novel than a tactics game, the story and twists it delivers are the best in the series. 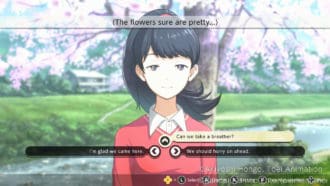 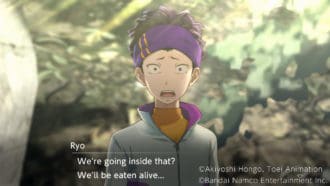 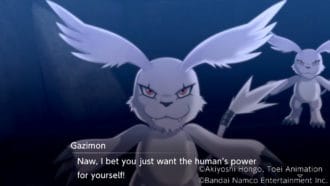 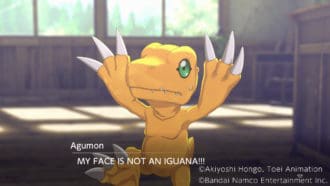 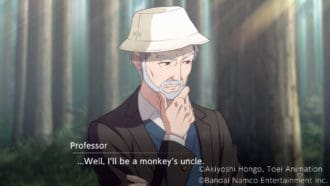 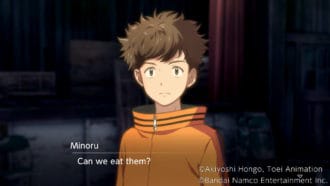 Between the text reading and decision-making, Digimon has an Explore mode. The story halts and asks players to search around the environment, speak to their friends, and use a phone camera to uncover secrets.

Using an analogue stick to control a cursor over a still environment is never great. Luckily, there is an option to snap onto the next point of interest and it clearly notes which actions will progress the story with a red icon. For a game that isn’t always fast-paced, these tools help to get back on track and experience the enthralling tale quickly.

Speaking to people in these Explore sections can show off the humour and drama in the game. You’ll encounter funny conversations with Agumon, hear about how worried Labramon is about Aoi, or listen to Ryo complain again. It’s complimentary, but there are certainly moments in these sections when you’ll want to move on to the next plot point as quickly as possible.

The phone camera is an essential tool for discovering useful items and data. Unfortunately, you’ll need to whip it out and slowly scan every environment to ensure nothing is missed. Often, items found won’t be that valuable. Still, the one time you don’t use the camera will be when you miss an Evolution Slab or a permanent stat buff. It’s not ideal but rewards players who take the time to search. 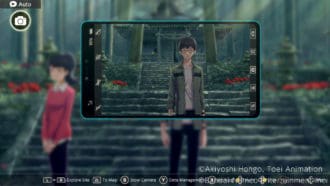 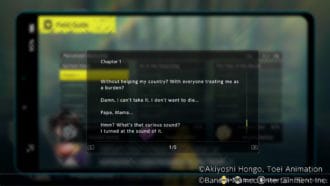 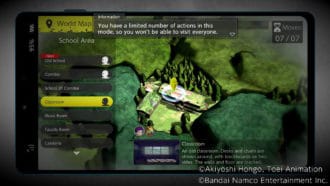 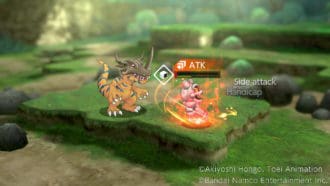 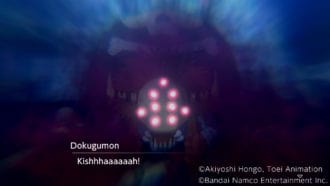 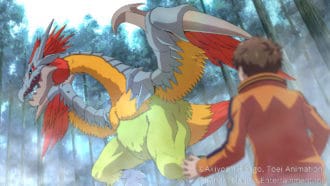 The other third of the game is the tactics battles. Each plays like a mix of Fire Emblem combat with Persona negotiations. Select starting positions of the Digimon you want to fight at the top of each battle, considering their differing types and digivolve abilities against the upcoming foes.

Combat is simple and turn-based. It’s not entirely shallow, but it’s very accessible. You can fight yourself or let the AI do it for you and turn the game into an auto battler. Both methods work well and help players enjoy the parts of Digimon Survive they like the most. You can deal more damage by attacking from behind or the side, and with so much space on the field it’s usually straightforward to achieve.

However, this means combat is extremely easy. There are hardly any battles that will have you worried about your Digimon. You’ll have at least four or five Digimon on the battleground, rarely run out of SP to perform strong moves, plenty of usable items that provide bonuses, and the enemy AI isn’t complex.

There are only 117 monsters in Digimon Survive. That’s significantly less than previous games like Digimon Story: Cyber Sleuth. Still quite a bit, but the game encourages befriending higher-levelled Digimon during battles rather than focusing on current allies. Digivolve items are frustrating to find unless you have the patience to search everywhere and pick up items. With such a small roster, the focus should be on training and levelling up those you have, making new Digimon harder to befriend and emphasising the digivolve upgrade tree. Instead, you’ll likely be befriending the same Digimon repeatedly to ensure your party is strong. 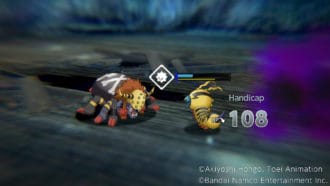 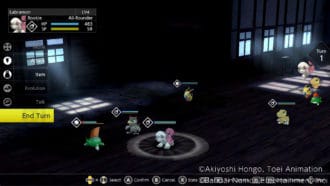 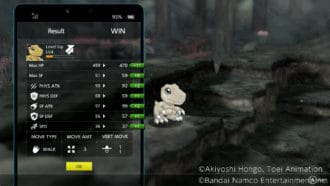 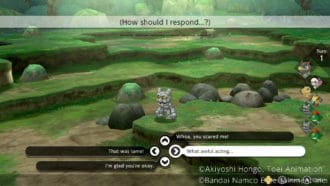 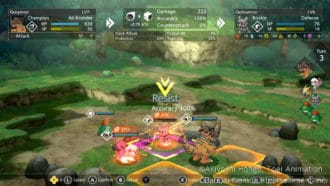 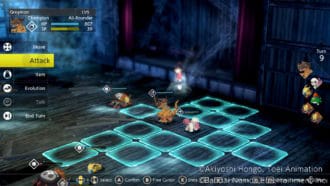 Thanks to the quality anime art style, the selection of Digimon and their human pals look fantastic. Unlike the television show, the art and characters are incredibly crisp with great detail. Between dialogue, the animation is smooth and moves around within the scenes to make them feel dynamic. It’s an extra touch that goes a long way to making the visual novel elements stand out.

Milestone moments in the story are marked with anime animation, offering the characters full movement and voice. It’s a great reward for completing a chapter and shows developers’ effort in building these characters.

Yet, the visual style changes in tactics battles and isn’t nearly as impressive as the rest of the game. Digimon are illustrated more like chibi, short and cute, and with stiffer animations. On the Nintendo Switch, these battles also have a distracting drop in frames per second. While the special effects of attacks and digivolving aren’t as disappointing, it makes the tactics battles much more unlikeable.

The majority of the game is fully voiced, with excellent performances from Japanese voice actors. Chika Sakamoto returns to the role of Agumon and other experienced anime actors like Atsushi Abe and Kôhei Amasaki also contribute their talents. The expression they can provide to a character with limited facial movement is outstanding.

While it’s not a negative, there is no English voice acting in the game. So people who prefer to listen or have trouble reading text will find Digimon Survive a challenging game to play.

Despite its flaws and hardship, Digimon Survive is an absorbing visual novel. It is a more profound and darker story than generally expected from the Digimon world with captivating characters and storytelling. The exploration and tactical battles provide a break from the immense amount of dialogue, albeit not as fun and the latter feels like a lacklustre last-minute addition. Regardless, Digimon Survive is a great game for fans of the universe.