Moonscars is a visually striking 2D action game drawing inspiration from other high-difficulty, narratively minimalist games such as Dark Souls and Hollow Knight. Its painterly art style and brutal difficulty will be draws for fans of the Soulslike genre, even if its storytelling often falls on the side of confusingly obtuse.

In Moonscars, you play as Grey Irma, a “Clayborn” individual sculpted in the image of a great warrior. Cursed with a desperate need for ichor, life force absorbed from slain enemies, as well as the need to reunite with her creator, the enigmatic Sculptor, Grey Irma must cut a swathe through the formidable opponents and hulking bosses that stand in her way.

If any game needed some kind of codex or glossary of key terms and characters, it would be Moonscars. Although clearly inspired by games like Dark Souls, Hollow Knight, and Blasphemous, all of which relied on minimalist environmental storytelling, I feel that Moonscars goes a little bit too far with that. The general stakes and protagonist’s goal feel murky.

As the protagonist is an established character with a history and relationships (rather than the standard blank slate in most Soulslikes), the barrage of unexplained names, backstories, and terminologies are made even harder to follow than usual. The fact that much of the exposition is delivered by Etalag the cat (whose dialogue becomes less and less lucid as the game progresses) and the recurring gargoyles (who speak almost exclusively in riddles and taunts) only serves to make the plot and mythology harder to comprehend or become invested in. 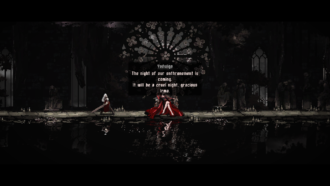 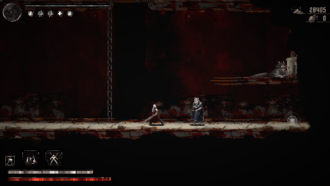 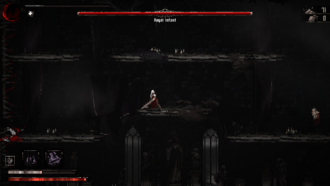 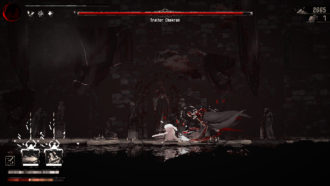 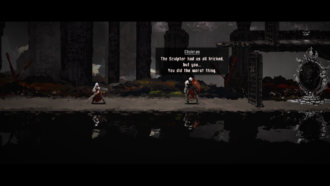 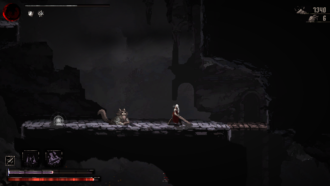 Compared to its impenetrable worldbuilding, Moonscars’ combat is elegant in its simplicity. Grey Irma has her signature sword, along with a handful of Witchery abilities and a special sub-weapon that can be swapped out at save points. There is a focus on environmental kills, which I found to be a nice touch, where enemies can be pushed into spiked walls or lured into traps for easy executions. The parry mechanic is also hugely important, with mastering its timing being a crucial tool in taking down some of the game’s tougher foes.

Your Witchery powers and healing draw from the same ichor meter, which is restored upon dealing damage to enemies. It’s a nice system that rewards the player for keeping on the offensive. As long as you use your ichor wisely, you can always recover and stay in the fight. In keeping with the standard Soulslike formula, your dropped upgrade currency (called Bone Powder) is left at your grave, and you can recover it if you make it back there again without dying. Bone Powder can be invested in new Witchery powers or purchasing accessories which provide passive bonuses.

Although the combat itself works well in that “easy to learn, hard to master” kind of way, Moonscars perhaps overcomplicates things with some of its supplementary mechanics. For instance, each time you reach a save point, you shed off your clay form for a new one (obtaining a new randomised sub-weapon along the way), however, you must then defeat your doppelganger who has now spawned and is out for your blood (or ichor in this case). Although these fights were rarely especially difficult, they disrupted the general requirement of a save point as a place of respite and sanctuary, and felt like something of an annoying and repetitive extra step to unlock progress. I’m also not a fan of the Moonhunger mechanic, where enemies become tougher if you fail to return to your grave without dying again. Although this can be reversed with a somewhat-rare additional currency, it punishes the player for failure in a way that makes it more difficult for them to recover and try again, which doesn’t feel fun or fair.

“Moonscars often feels like a painting come to life, which feels especially apt in its elaborate and nightmarish boss fights.”

Moonscars’ most memorable feature is its gorgeous art style. The developers were inspired by the Dutch oil painting old masters, with its world portrayed in a vivid palette of greys, reds, and greens. Moonscars often feels like a painting come to life, which feels especially apt in its elaborate and nightmarish boss fights. Small features, from Grey Irma’s reflections on water to her weighty attack animations, make the game’s world a trip to dive into.

The word of Moonscars steadily expands as you defeat bosses and obtain new abilities to access new areas, from opening new kinds of doors to super-dashing across chasms. Although a certain amount of backtracking and aimless exploration is perhaps par for the course in a Metroidvania such as this, the oblique storytelling and map design can make it somewhat unclear where the player is supposed to go next at points. Moonscars may have benefitted from taking a leaf out of the books of recent Metroidvanias, such as Guacamelee! 2 and Metroid Dread. These games find a middle ground of providing a general idea on their maps of where the player needs to go and ensuring the player doesn’t get completely lost, while still leaving the general path vague enough for the player to put in work of their own.

Unfortunately, my playthrough experienced an odd game-breaking bug some way in where, upon dying at the same time that I landed the finishing blow on a boss, I didn’t obtain the required ability to progress to the next area that is supposed to be provided upon victory. It’s a pretty unusual situation that most players likely won’t experience, and will hopefully be patched before long, but is something to be mindful of.

Despite taking clear inspiration from other prominent Soulslike and Metroidvania titles, Moonscars does enough with its unique art direction and gameplay features to stand out from an increasingly populated crowd. Although its lore and plot could have stood to be more clearly communicated, and not all of its additional mechanics feel as enjoyable as the core combat and exploration, Moonscars’ visceral gameplay and gorgeous visuals make it worthwhile to check out for Soulslike fans seeking a new challenge.