New Tales from the Borderlands Review – Lands of opportunity

When the word “Borderlands” is uttered, it most likely conjures up images of the looter shooter trilogy, not the 2014 narrative adventure Tales from the Borderlands. Though they are set in the same universe, the two contain very different playstyles, with Borderlands being a first-person shooter with RPG mechanics whilst Tales is a point-and-click episodic adventure. The original Tales was also developed by the once-defunct and newly-resurrected Telltale Games, who specialise in point-and-click adventures such as Back To The Future, Sam & Max, and more recently, The Walking Dead. Tales from the Borderlands was set after the events of Borderlands 2 and used an art style that was quintessentially Telltale.

There’s a reason Tales has “New” in its title rather than “2”, as the devs describe it as a “fresh perspective” and “intentionally not a sequel.” The game has been developed by Gearbox Studio Quebec using Unreal Engine, making it look and move like a Borderlands game but still feel like something completely new and fresh. It sticks with the original mechanics of the previous Tales game, bringing in elements of point-and-click, narrative choices that matter, and quick-time events that lead you to succeed or fail at different tasks.

New Tales from the Borderlands follows three new characters and takes place on the planet of Promethea, one year after the events of Borderlands 3. It is separated into five chapters, though all will be released at once rather than episodically. In these chapters, you will get to play as Anu, Fran, and Octavio. The game begins with the player controlling one of the three characters to establish their back story, but as the narrative continues, you may be asked to make quick-time actions and narrative decisions for all three within a scene.

Anu is stationed on an Atlas space station trying to produce a device that will stop violence, counteracting Atlas’ gun-fuelled ethos. Fran is trying to work on her anger issues, but battling with insurance officers to pay up after her Froyo shop’s roof caved in during an air attack really isn’t helping her stay calm. Then there’s Octavio, Anu’s adopted brother who thinks he’s a “man about town” rather than a gangly street kid who is trying too hard to get on the Promethea “Dirty 30” influencers list. These three make an unlikely trio who just so happen to stumble across the location of a Vault Key and decide to band together to try and capture the treasure within. This journey takes them through many dangerous events where they meet friends and foes and, depending on your choices, maybe solidify their own fragile bonds.

There are a number of elements that make these characters come alive, one being the amazing voice acting that make the pacing, inflections, and overall speaking style of each character unique and emphasises their personalities. There has obviously been a lot of care and time put into making sure that the dialogue and actions are true to each character’s personality and connect with the views and values they hold. When I spoke to the game’s Head of Writing Lin Joyce last month, it was obvious that she had a lot of love for these characters. I fell in love with them all pretty quickly due to how complex they were. New Tales gives you the opportunity to really delve into the character’s psyches, showing how flawed they are at times which makes them seem like real, living, breathing people. If I knew them, I would totally want to go and have a few tacos with them (tacos are very beloved in the New Tales world)!

It’s not often that narratives focus on and also celebrate non-romantic relationships and New Tales from the Borderlands does this so well. I’ve always thought that romantic relationships were too oversaturated in our society, so the way that New Tales uses the themes of friendship and family mixed with the ideas of love and identity made me have more respect for the game’s vision overall. This sentiment holds true in the characters too because the main cast is so diverse and looks different to your usual “gaming heroes.” Anu is a person of colour and also a nerdy female scientist. Octavio is also a person of colour and is adopted, highlighting that the nuclear family isn’t always the ‘norm.’ Fran is a plus-sized pansexual covered in tattoos and zooms around in a hoverchair that lets her bash doors down and chill Froyo… and her enemies.

Another strong theme in the game is power. Promethea is constantly being invaded by one of the many big corporations running the galaxy and New Tales shows the player the frustration of living around such corruption. Octavio is literally annoyed that his home is always taken over; you can see that the city is falling to pieces due to constant attacks and residents are experiencing whiplash due to the frequent changes to the rules.

Though your three characters are tiny elements in the big, corrupt Borderlands universe, you get to give them some autonomy by having a say in their journey. The core of New Tales from the Borderlands is the narrative and characters, meaning that the gameplay really does take a secondary seat. The quick-time events are never too difficult, with only a few asking me to press a combination of joystick and AXYB buttons to simulate the character’s actions. Character dialogue options were sometimes different, though I did find at times that they were saying the exact same things, just in a slightly different way. Some of the most action you will experience will be when the game throws you into one of its mini-games. These include Octavio’s hacking ability, and more notably the Vaultlander battles.

“It’s not often that narratives focus on and also celebrate non-romantic relationships and New Tales from the Borderlands does this so well.”

Vaultlanders, which are collectible figurines in the New Tales universe, can be used to battle against another player’s Vaultlander in a tabletop miniature battle. These figurines are based on popular characters from the Borderlands universe and can be won by battling NPCs but also by finding them around the world. This minigame addition fell a bit flat, with the battles seeing me take no damage at all. I feel that the devs included this element to give a nod to the original series, which there are a few of. Fans of the original games will be happily surprised to see these cameos, but newcomers to the world won’t feel that they need to have played the games to enjoy their experience. 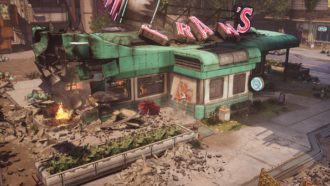 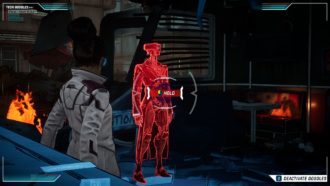 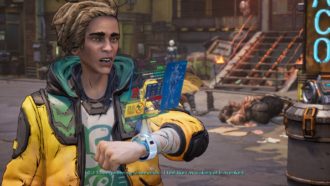 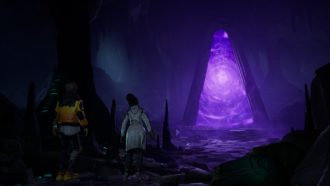 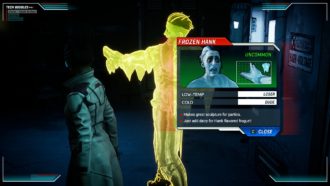 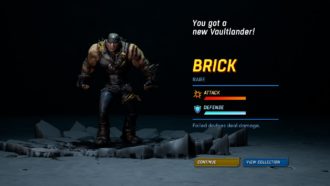 At the end of each chapter, the game provides you with a summary of your choices and how close the characters have become due to the narrative’s current trajectory. The game also provides a percentage score for the relationship between each of the three characters and an analysis of how popular your choices were amongst other players. It also provides a moral score where it uses skateboards to provide an assessment of how your group are fairing as a whole.

This skateboard gag is reflective of the slapstick, sometimes dark humour present in New Tales, which seems to elevate the humour that Borderlands 3 received so much flack for. Throughout your journey, you’ll meet a number of funny and endearing NPCs, such as Octavio’s assassination robot mate, LOU13, who is responsible for handing out the skateboards to the group based on their actions. Including LOU13 and this new selection of NPC characters just adds more colour to the already bright world of New Tales from the Borderlands. These NPCs make up one element of why New Tales from the Borderlands is an exciting new addition to the Borderlands universe.

New Tales from the Borderlands could have played it safe by using characters from the well-established universe that people know and love. However, Gearbox Quebec’s decision to create a whole new bunch of ragtag characters that connect so clearly with Borderland’s existing humour, art style, and lore has really paid off. New Tales from the Borderlands isn’t a gameplay-heavy game, but the visuals, narrative, and the way the character’s personalities are so well-developed kept me riveted and surprised. With what Gearbox has created here, I wouldn’t be surprised if we see even Newer Tales From The Borderlands in the future.