Gungrave G.O.R.E is the newest mainline followup to the Gungrave arcade shooter franchise, developed by Korean studio Iggymob. The series has been dormant for some time, having not seen a mainline release since 2004 (Gungrave VR in 2019 notwithstanding). While the game is certainly competent as a shooter and contains some nice-looking, over-the-top action cutscenes, the barely-there plot, repetitive gameplay, and bland levels cause the padded-out stages to seriously outstay their welcome before long. Perhaps this grave is one that would have better remained undisturbed.

In Gungrave G.O.R.E, you play as Beyond the Grave (or just “Grave” for short), a mute undead assassin who is a member of a resistance movement, which travels around South-East Asia to prevent the manufacture and distribution of a drug called SEED that turns people into violent mutants. In order to do this, you must hunt down the Mafia bosses who control the SEED cartel. In spite of marketing itself as a standalone adventure, Gungrave G.O.R.E doesn’t spend much time catching the player up if they haven’t played the original games, and some background reading is required before you jump into the main campaign.

The fact that there isn’t much plot here isn’t in and of itself much of a problem; stylish action games such as this one tend to define themselves by their lead characters and over-the-top action gameplay to engage the player. Unfortunately, it’s hard to identify with Grave as a character, as he doesn’t really have any characterisation. He barely speaks and maintains the same expressionless scowl on his face whether he is hanging out with his allies or massacring gangsters. In spite of his cool visual design, the game’s attempts to hype up his exploits with the “Kick Their Ass” message that commences every new stage fall flat. This is because Grave simply lacks the swagger of Devil May Cry’s Dante or Bayonetta’s… Bayonetta, or even the barely-constrained rage of the Doom Slayer, that might have made him even slightly engaging as a main character.

Occasionally, Gungrave G.O.R.E takes a break from Mr. Charisma as the player character and lets you play as other characters in a few stages. Although I have some gripes with them on the gameplay front, they were at least a breath of fresh air in terms of playing a voiced character who feels like a real person. 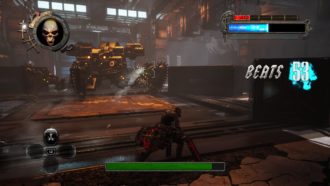 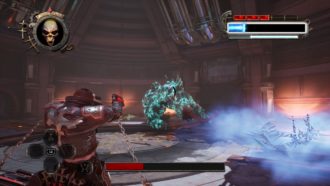 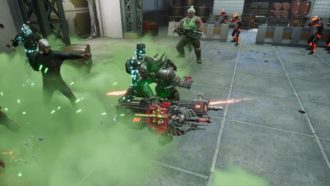 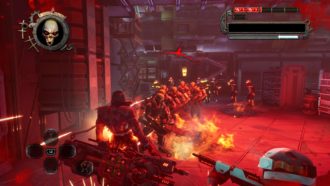 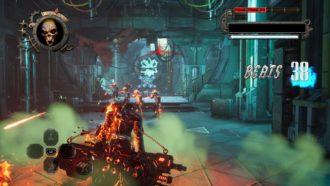 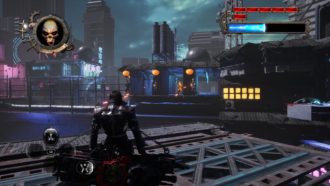 As far as the gameplay goes, it’s an arcadey, stage-by-stage affair where you travel through rooms gunning down everything that moves, until the door to the next room opens and you can progress. Each stage is around 10 minutes long, and extremely linear; an arrow constantly points towards the correct direction, and no hidden secrets or encounters can be unlocked by straying from the beaten path.

Backtracking isn’t even an option, as doors automatically lock behind you as you enter them, often causing you to immediately get shot to death unless you can dodge-roll out of the way in time. I found the lack of complexity disappointing; with pretty much no story and no exploration, the only thing Gungrave G.O.R.E has going for it is its combat, and for this game, that is an incredibly shaky foundation.

The nearest comparison one could make for Gungrave G.O.R.E’s combat is Devil May Cry, if there was more of a focus on ranged attacks. As in that series, levels are split up into distinct stages, and you are graded at the end based on damage output, amount of damage taken, and how long it took. Unlike DMC, Gungrave’s combat has far less variety to it; there are no new weapons to unlock, and the number of new combos you can purchase between stages is very limited. As such, the combat doesn’t noticeably evolve throughout the game, and you are not incentivised to mix up your attacks because there just aren’t many options to choose from.

What’s more, as in DMC, Grave’s pistols are reliant on a very unhelpful auto-targeting system. This is fine in DMC as the pistols are more of a backup weapon anyway; not as much in Gungrave. Rooms are flooded with hordes of enemies, and which enemy you will shoot or utilise your ranged grab attack against is anyone’s guess. There is a manual aim button that you can use, but it is mapped to L1 and can’t be rebound, causing my fingers to cramp as they remained pressed on such an unnatural button for aiming. Manual aim is also often suicide as it requires you to remain still while a small army is emptying a sea of lead into you, practically requiring you to chip away at them while dodge-rolling around like an undead Max Payne.

There are two other playable characters who sub in for a few stages, Bunji and Quartz. One issue with these stages is that although their gameplay is very similar to that of Grave’s, they don’t have any of the upgrades that you have invested in, so changing to them generally feels like a bit of a downgrade. On the other hand, Quartz’s close-range focus feels like a much better fit for the gameplay considering the number of foes the game throws at you, and didn’t leave me at the mercy of the game’s auto-aim quite as often.

“So many levels are grey underground labs or warehouses or military bases.”

Another thing that Gungrave G.O.R.E has going against it is its level design, specifically its love affair with grey underground labs. So many levels are grey underground labs or warehouses or military bases. At one point it takes a break and changes the setting to a pleasant Vietnamese mountain path for a bit, only to then go back to a grey underground lab just to return to form.  It’s a very boring and monotonous level theme that doesn’t feel nearly as boundary-pushing or over-the-top as its aesthetics suggest, and its frequency causes most of the levels to blend together visually.

Gungrave G.O.R.E is overall a bit of a misfire, and evidence that some franchises should stay in the early 2000s. The game is a spectacle action game that has failed to learn anything meaningful from 20 years of game design evolution, from the importance of having an interesting or charismatic lead to gameplay which gives the player options and which evolves over time. The levels show a strong disposition towards dark and grey, and the plot won’t do much to engage you either. If you’re a diehard Gungrave fan who has been longingly awaiting the franchise’s revival, there might be something for you here; for anyone else, there are far better offerings out there.