Are you nostalgic for the boomer shooters of yesteryear? Do you yearn for the days of keycard hunting, hordes of foes, and just enough plot to string it all together? Well, T19 Games’ Dread Templar has you covered, delivering a love letter to the retro FPS genre, to both its credit and detriment. Fans of the original Quake and DOOM games will definitely get their fill from Dread Templar, but it doesn’t have much ambition to carve out much of its own identity.

In Dread Templar, you play as the titular character, who is a sort of holy demon hunter. When the game begins, you descend into hell to avenge your family and kill as many demons as you can, steadily upgrading your arsenal as you go. This isn’t made super clear from the start, however the player character’s backstory is progressively revealed in short, edgy flashback sequences.

It isn’t Shakespeare, but it provides just enough context to the demon slaughter to keep the experience moving without disrupting the gameplay. I was somewhat disappointed by how little the game’s premise, plot, visuals, or gameplay diverge from its main inspirations, Quake and DOOM. Unlike some other recently-released 90s-inspired shooters, it doesn’t have the eye-poppingly distinct visual style of KINGDOM of the DEAD, the goofy sense of humour of Shadow Warrior 3, or even the unique movement mechanics of ULTRAKILL. Fundamentally, Dread Templar is a competent Quake-like, but lacks much of an identity of its own. 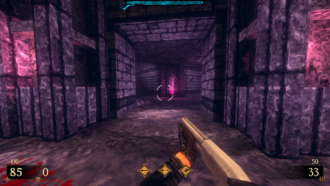 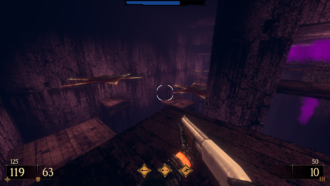 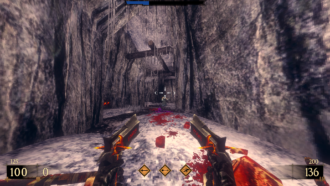 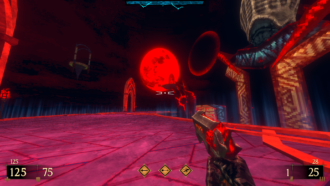 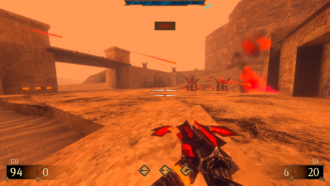 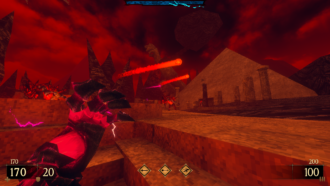 “Even on the normal difficulty, Dread Templar can be quite challenging, particularly with how sparing the game can be with its health pickups.”

Dread Templar may lack a unique selling point, but it’s still a blast for the retro-FPS enthusiast. Throughout the game’s 5 episodes, each separated into smaller chapters, you will explore large, labyrinthine levels, filled with enemies, secret side areas, and upgrades. You start off with a katana and dual pistols, but steadily add to your expansive arsenal.

Even on the normal difficulty, Dread Templar can be quite challenging, particularly with how sparing the game can be with its health pickups. It led me to play quite cautiously and be grateful for every save point I came across. While this is true to the level of difficulty that those old FPS’ had, those accustomed to the faster pace and more liberal distribution of healing items in modern FPS games, such as DOOM Eternal, may find switching to Dread Templar to be a tough transition.

The game’s damage indication could also do with improvement. It is often unclear that you are taking damage aside from a mild “ugh” sound by the player character and your HP numbers going down. Particularly with how many annoying flying enemies with homing attacks there were, my health would whittle down fast with little indication of from where I was being attacked, or even that I was taking damage at all until it was too late.

On the other hand, Dread Templar’s upgrade system was a lot of fun. The weapons themselves are already a blast, with many weapons getting alternate firing modes, like the katana also being a throwable spear or the pistol doubling as an SMG. Each weapon has up to three slots in which upgrades can be inserted, and both the tokens to unlock the upgrade slots and the upgrades themselves are mostly only found in the game’s secret side areas, encouraging going off the beaten path.

The upgrades range from basic damage and rate-of-fire improvements to more substantial overhauls, like turning your SMGs into hellfire miniguns or allowing you to fire explosive arrows from your bow. A side effect of the upgrade system is that the difficulty curve of Dread Templar can feel a bit all over the place in some areas, with the first few bosses being some of the toughest in the game, whereas the final boss went down on my second attempt.

Dread Templar also includes Guardian Mode, a sort of additional wave-based horde mode accessible from the main menu. All of your upgrades from the campaign carry over, so you’re encouraged to check out Guardian Mode once you have completed it. You must defend a central crystal from an onslaught of demons, while buying upgrades and resources with points between waves.

It’s enjoyable enough as an additional gameplay mode. That said, considering that Dread Templar has no multiplayer features, it can feel a bit frustrating and dull playing on one’s own with no allies aside from disposable AI defenders. Adding a greater variety of traps that you can lay, or altering the environment in later waves so that there is a greater progression as you play, might have made it more engaging.

Of course, the game wouldn’t be a fitting homage to the early 90s FPS genre without an absolute banger of a soundtrack, and Dread Templar delivers. Notwarhol’s metal soundtrack never failed to get me amped for the action, keeping up the intensity as I assaulted the enemy forces.

Dread Templar maintains a retro style to its visuals, with deliberately blocky, low-resolution enemy models. I also liked the vibrant environments and cool boss designs, particularly from the second episode onwards when it leaves the dull, brown Quake castles and adds some more variety to the settings that you explore.

You probably already know if you are the target audience for Dread Templar. The game skillfully captures the spirit of classic FPS’, for better and for worse. The challenging gameplay with a large arsenal of crazy weapons is there, along with deep, secret-filled levels. However, it has all been done before, and while Dread Templar is a very competent and enjoyable shooter, it doesn’t do a whole lot to carve out an identity of its own outside of being a homage. Still, if you’re into classic FPS games and want a modern title that strongly evokes the era, you could do a lot worse than Dread Templar.