Among the standard AAA blockbusters and ads, Gamescom’s Opening Night brought us DokeV (pronounced Dough-Kay-Vee). The trailer, well, is a lot to process. If you want an experience akin to downing a pixie stick laced with cocaine and LSD, jump in. If nothing else, it’s a spectacle and a half and probably more. Though, I am left with some questions like “Why do I love this?”, “Did they just kill a monster with a space hopper?” and generally “What the hell just happened?”. Word to the wise: Don’t watch the ultra-colourful, bright, bubblegum pop trailer for DokeV with a post-vaccine headache.

So allow me to try and pull things together here:

“GTA for babies, plus Pokemon” is a community tagline that seems to be circulating. As the devs pointed out, this game is not an MMO but an open-world action game. Of course, should DokeV follow in Rockstar’s footsteps, “GTA Online but for babies” also works. I mean, playing skip rope with bots isn’t quite as enticing as playing it with friends.

The GTA influence is really just a way of saying, “open world you can mess around in”. It’s for the best. I’m not sure that a children’s game allowing for shooting people and vehicular manslaughter would be well received. Granted, it puts me more in mind of a Yakuza or Final Fantasy XV. It has that very Japanese open-world feel where it’s about having a ridiculous amount of side quests and minigames sprinkled across the map. Despite differences from its Western counterpart, DokeV raises the classic question for its ilk in games where you can do anything you want: “What is the focus?”.

That’s not to say it doesn’t look fun. I’m a big advocate of fun traversal in games. Any title that can make the mere act of going from A to B an exciting prospect is doing something right. DokeV has it in spades, putting me in mind of the very vibrant pop meets extreme sports vibe of Splatoon and Sunset Overdrive. In the grand scheme, we still need something to focus the experience around. I suppose this is where the second half of the description comes into it. 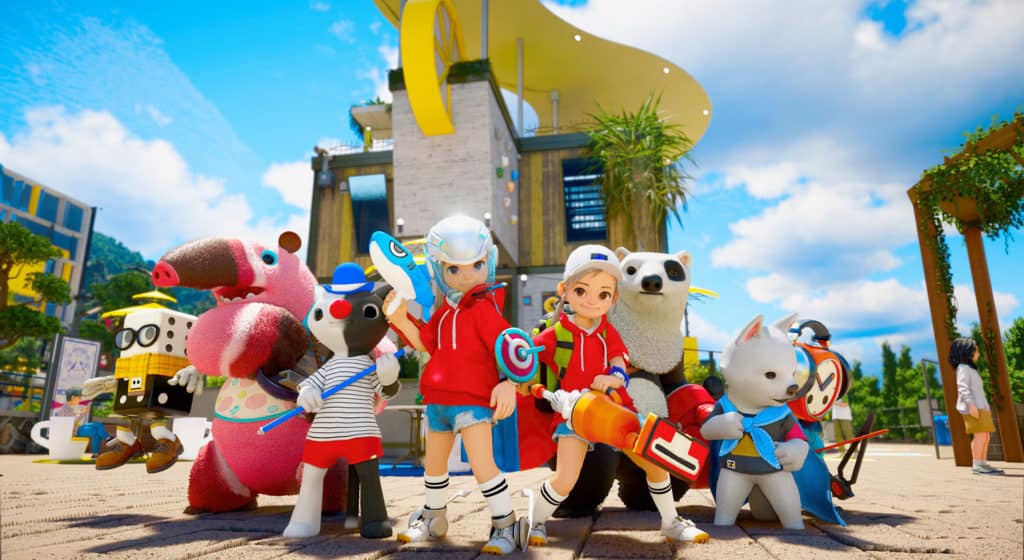 The Pokemon side is where it starts to get out of hand. Citing Pokemon as an influence might be reductionist. It’s kind of hard to tell if there is a solid one-to-one relationship between Pokemon and the “Dokebi” in this game. The obvious rebuttal is “Well, it’s about collecting and fighting creatures and it’s Japanese”. Having said that, there are definitely a few discrepancies between the franchises. Battles seem to be fully real-time action, which I for one am all in for. The player character is able to jump into the fray, with some cartoony hammer and space hopper weapons. It’s a nice choice, and definitely excites me more than a new Pokemon game tracing the same circles.

All the combat has this kaleidoscopic, neon-soaked energy to it all. Every enemy is an event that evokes Monster Hunter by way of Pokemon Unite. As best as I can tell, this feels like it’s supposed to be the main quest. Honestly, it’s not a bad idea. I, for one, struggled a bit with Monster Hunter. It is, after all, a game where you can follow a deranged chicken for 30 minutes, hacking at limbs all the way, and yet failed because this giant loon in front of me “got away”. However, it does mean the absence of multiplayer is noticeable.

Oh, and what about that “sailor moon transformation sequence, shooting love out of your hands like a homicidal carebear” thing?

No word on when DokeV is coming out but it’s sure to be colourful, energetic, and probably more digestible.

Check out some more of the Gamescom indies, like Cult of the Lamb and Humble Bundle’s Game Pass titles.