The Good Life is a crowdfunded photography/detective/”debt repayment RPG” title by Hidetaka “SWERY” Suehiro, the wild mind behind Deadly Premonition and D4: Dark Dreams Don’t Die. A quirky and rather charming tale involving a murder, aliens, ancient mythology and sheep, The Good Life is just as much of a mixed bag narratively as it is in the gameplay department. Similar to this creator’s previous efforts, its ambition and imagination is counterbalanced by technical flaws and a myriad of fetch quests that will frustrate all but the biggest SWERY diehards.

The Good Life follows Naomi Hayward, a photojournalist from New York who somehow becomes £30,000,000 in debt to her employer. She is sent to the sleepy English town of Rainy Woods to uncover its secrets and pay off her debt. Pretty soon, it becomes clear that all is not as it seems; the town’s denizens turn into cats and dogs at night, an ability that Naomi acquires shortly into the game. After witnessing a murder involving several strange phenomena, Naomi vows to get to the bottom of it, while still pursuing several zany get-rich-quick schemes to pay off her creditors.

The Good Life starts pretty strong. The cartoony character designs, charming British accents and farm animals combined with the eerie atmosphere makes the experience come across like Deadly Premonition crossed with Shaun the Sheep. Naomi’s crass sarcasm and determination contrasted with the easygoing and chipper inhabitants of Rainy Woods comes across as pretty funny and makes her a fairly likeable protagonist.

“The Good Life struggles to focus on a central gameplay mechanic.”

Unfortunately, once the gameplay starts in earnest, that’s where many players will become disengaged. The Good Life struggles to focus on a central gameplay mechanic. As a photojournalist, Naomi spends a lot of her time taking photos of the people and environment around her and uploading them to the Flamingo social media site. However, this is more of a source of passive income, with photos that correspond to certain “hotwords” earning more money. This isn’t Pokémon Snap; you aren’t graded on how high-quality your photos are, nor is locating the right targets much of a challenge.

The game also dabbles in other gameplay mechanics, like a drinking minigame, sheep racing and farming, but they feel similarly shallow and hard to get invested in. Even the whole “turning into a cat and dog” element doesn’t feel as integral as you’d expect; you can track scents and pee on stuff as a dog and climb high places as a cat, but you’ll be staying a human for the most part unless the quest calls for you to transform.

Admittedly, having a lot of side distractions isn’t always a bad thing; the Yakuza franchise is as beloved for its quirky minigames as it is for its intricate crime drama. However, the Yakuza games at least have a strong foundation in their beat-’em-up/turn-based combat mechanics to fall back on, whereas everything in The Good Life ends up being a fetch quest.

Want medicine to cure your toothache from the local witch? Better find a bunch of insect parts. Want a beautiful dress so that the sheep butler will let you into the spooky castle? Better scrounge around in the bins looking for glass beads. Most of the side quests amount to talking to a person, bringing something to a person, or finding and taking a photo of a thing or person. The fact that the game occasionally hangs a lampshade on itself and remarks about its quests being dull RPG staples doesn’t make them more bearable.

Unfortunately, The Good Life makes the act of getting around feel as laborious as possible. The town of Rainy Woods and its surroundings is way too big for the amount of actual content in it, with the majority being green fields split apart by narrow walls. Naomi’s default walking speed is toe-curlingly slow, and her stamina meter drains fast when you sprint. The fast travel system costs a surprisingly large amount of money to use each way, making the decision to skip the commute a punishing one. What’s more, if you neglect to eat and sleep regularly, Naomi can become sick and have her stamina sapped even further.

And yet, despite how boring I was finding a lot of the day-to-day activities, The Good Life really does grow on you after a while. Rainy Woods’ eccentric inhabitants, from the alcoholic vicar to the Sherlock Holmes knockoff to the blacksmith who wears full plate armour and speaks in Elizabethan English all the time; they’re all compellingly weird and fun to interact with. It was quite a joy getting to know them and uncover the town’s mysteries. Furthermore, the plot itself goes into some appealingly bonkers places that had me very engaged by the story’s end. 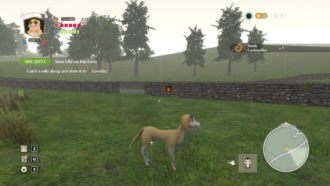 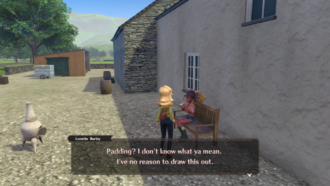 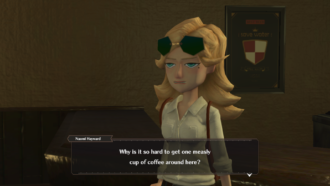 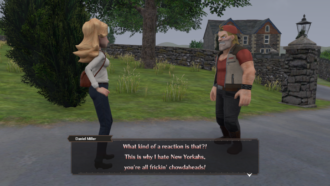 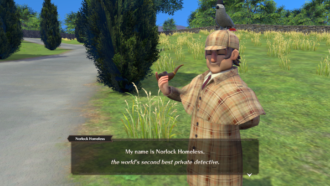 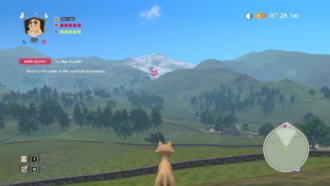 I kind of wish The Good Life leaned more into the Stardew Valley-esque life sim elements; for instance, its lack of a relationship system to encourage getting to know specific NPCs feels like a missed opportunity in a game that went to so much effort to make them unique and interesting. Furthermore, a lot of the systems that are in place, like requiring the player to ensure that Naomi sleeps, showers and eats regularly, feel more like annoying chores than immersive gameplay mechanics, and could do with being downplayed.

It also isn’t the most technically polished experience, although SWERY veterans perhaps expect a bit of jank by this point. Numerous typos, like Cottage being spelt Cottag, and other in-game misspelt signs abound. The draw distance isn’t very good, leading to trees and bushes popping into view as you ride through the countryside.

The limited sound bites are also distracting; although some cutscenes will be fully voiced, many are text-only with occasional vocalisations, primarily Naomi complaining about Rainy Woods being a “goddamned hellhole”. In gameplay, there is only one bark sound and one meow sound when you use your animal abilities, and Naomi will always says the exact same thing every time you do a speed boost on your sheep. Some variety in the sound effects would go a long way to making them less irritatingly repetitive.

While The Good Life is an often frustrating and dull experience, riddled with annoying mechanics and lacking in polish, I’d struggle to say that I necessarily had a bad time overall. I found the town of Rainy Woods and its mysteries engaging enough to want to see the experience through to the end. There are so many nuggets of potential that are held back by irritating health meters and repetitive side quests. If you’re a fan of SWERY’s previous output or have a lot of patience for fetch quests, there is reason enough to check out The Good Life, but it is a hard sell for pretty much anyone else.