After several years of exclusivity on iPhones via the Apple Arcade, Red Games Co.’s brick-based brawler, LEGO Brawls, has now made its way to PC and console. As a multiplayer experience in the vein of Super Smash Bros. and MultiVersus, it’s a competent enough time, however its simple mechanics and dearth of single player features don’t help it stand out compared to its contemporaries.

After a brief tutorial and option to design your own LEGO fighter, you’re landed on the game’s main menu invited to jump into a multiplayer match. There is no single player story or campaign mode, or even a perfunctory Arcade mode to give solo players some sort of structured challenge. Although LEGO Brawls does have an offline mode where players can compete against bots or friends via local multiplayer, there really isn’t much there for players not interested in the online multiplayer.

There is nothing wrong with developers designing a game exclusively with online multiplayer matches in mind. However, it is somewhat unusual nowadays for a premium game that is not free-to-play to be designed this way. This is particularly important considering many multiplayer-focused franchises, such as Call of Duty and Overwatch, don’t charge entry fees anymore. Although this focus on online multiplayer is perfectly fine for a subscription-exclusive mobile game, either going free-to-play or adding additional content for the console release is something the developers should perhaps have considered. 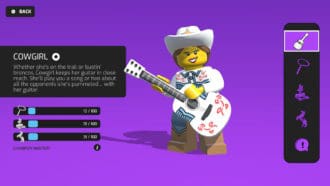 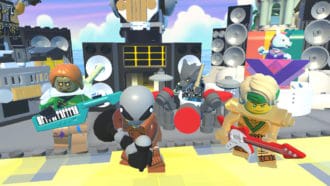 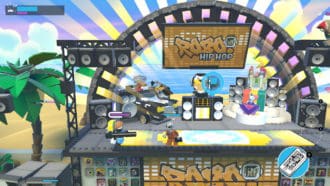 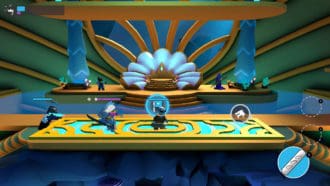 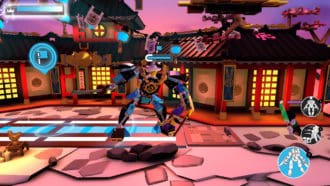 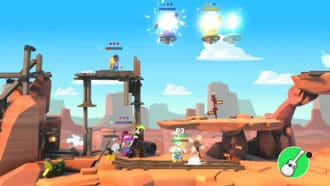 Once you have jumped into the multiplayer lobby, you and seven other players vote for the next match type. There are a handful of game modes to choose from, including free-for-all, capture the flag, and a mode based around collecting and hoarding dropped items. The available level themes are based around existing LEGO brands, including Pirates, Space, a few flavours of Ninjago, and Jurassic World as the only featured movie license setting for some reason.

Although all of the game modes in LEGO Brawls are certainly serviceable, the actual brawling suffers from extremely simple mechanics. All characters have a single melee attack and ground slam ability, which does not change based on whichever character you select. Some variety can be found with the unlockable powerups which are distributed across the map, however they are short-lived, and some definitely could have stood to be integrated into the regular movesets to provide players with ranged or additional mobility options.

“…the visual consistency of the minifig designs turns most fights into incomprehensible nonsense.”

The limited mechanics feed into LEGO Brawls’ other main issue, which is that the visual consistency of the minifig designs turns most fights into incomprehensible nonsense. Because every character is a humanoid LEGO figure, they all have the same size and virtually the same silhouette.

The stages are visually busy and filled with eight similarly-shaped figures all embroiled in a scuffle, hitting one another at close range due to lacking ranged attacks. It all becomes very, very easy to lose track of your character and what is going on. Considering LEGO Brawls’ competition is typically built around four-player matches, I cannot fathom why the developers thought eight would be the magic number here.

It would be more forgivable if the combat at least felt engaging, but LEGO Brawls does not really succeed on that front. There is no sound effect for your regular attacks making contact with the enemy. It makes it difficult to tell if it is your character dealing damage in one of the aforementioned incomprehensible melees, or one of the other participants. It also just makes the whole experience feel really underwhelming, as your figure limply swats at your foe as they silently get knocked back a bit, their health bar slightly reduced. This also does not change based on what item you equip your figure with; whether they’re attacking with boxing gloves or a baguette, the attack range, damage, and animation is exactly the same.

I did like the stage abilities, however. Certain stages have exclusive powerups you can unlock, such as a giant mech suit or commanding a leviathan with lightning breath. It added a good deal of variety into the otherwise repetitive matches, and I wish that the regular combat provided you some of those kinds of abilities as standard rather than limiting them to stage hazards.

Participating in online matches in LEGO Brawls steadily advances you along one of the in-game Battle Pass-esque “Themes” which you can choose from. Progressing through them unlocks new figures and accessories from that Theme. Once you have unlocked a figure, you can use their parts to create your own zany character to compete with.

Although it is not the most in-depth LEGO character creator I have experienced, it was still fun to make my own weird fighter and see the ones other players have created. I do wish that customisation had some gameplay implications, such as with the Mii Fighter features in Super Smash Bros. Ultimate. Despite it being purely cosmetic, the visual customisation options at least lean into LEGO’s signature brand of creative play.

As you play LEGO Brawls, you unlock Champions, special figures with unique powerups. Playing with that Champion character in Brawls unlocks their powerups for other characters, and makes other Champions available to play. Although a hypothetically interesting idea, its main problem is glacial pacing. After unlocking the first Champion, the Cowgirl, and using her exclusively in Brawls for several hours, I am only 40% through mastering her. I have won most of my matches too, so am unsure how much slower my progress would have been if I was less successful.

If ignoring the character customisation feature entirely and only using the same character over and over again is the only way to unlock new Champions, then I am unsure if it is a feature many will get much use out of. The developers should have either made it much quicker to master a Champion, or allowed other ways of unlocking them, such as directly purchasing with in-game rewards. This is another feature which would have been more forgivable in a free-to-play game, and which feels very out of place in a game charging a premium fee to play it.

I can see LEGO Brawls’ appeal as a free-to-play mobile game, where its simple mechanics and repetitive game modes are more excusable. As a full-priced console game, standing up against feature-rich AAA titles and even free-to-play titles, LEGO Brawls just doesn’t stand out in the slightest. Although a less complex brawler aimed at a younger audience might make sense, in this case it’s TOO simplified, where every character behaves the same and the only strategy is to run at your foes and mash the attack button. Combine that with the lack of additional single-player content and glacial progression system, and it becomes difficult to recommend LEGO Brawls to anyone other than the most devoted LEGO aficionados.