Checkpoint Gaming received early access to the PC version of Overwatch 2 for this review. From 19 September until 2 October 2022, we played eight hours of multiplayer across several two-hour play sessions in a controlled online environment. Overwatch 2 is a game as a service (GaaS) and this review captures the state of the game during this time.

Overwatch 2 refreshes the original player versus player (PvP) multiplayer matches with new mechanics and heroes. By removing controversial loot boxes and going free to play with a battle pass, Blizzard aims to restructure the content model for a longer-lasting community. With all its changes, Overwatch feels refreshed and ready for action.

We are in this together

Overwatch 2 is a colourful team-based shooter game starring a diverse cast of powerful heroes. Travel to global locations and contest objectives in now five-on-five combat (previously six people a team). Robots manufactured to help society began turning on humanity in an event called the Omnic Crisis in the first game. After the members of Overwatch suppressed the initial event, it seems the world is on the brink of a second uprising and our heroes are needed once again.

“As always, the quality of voice acting, music, animation, rigging, and special effects are a testament to Blizzard’s talented team of artists and animators.”

Although the story mode isn’t available yet, the universe is already well-known for its lore and outstanding characters. Fans already have their favourites but the three latest additions will likely steal hearts. Kiriko, Sojourn and the endearing Junker Queen add variety to team strategy, diversity to the roster, and deepen the narrative. Junker Queen has an extended Hollywood-budget cinematic, introducing her demeanour and backstory to the world. As always, the quality of voice acting, music, animation, rigging, and special effects are a testament to Blizzard’s talented team of artists and animators.

Additional dialogue at the start of matches between specific characters relays how rich Overwatch 2 is with characters. New recordings of Hanzo expressing his sorrow and Genshi trying to encourage him, snippets of banter between Junk Rat and Junker Queen, or Tracer being her optimistic self with other teammates. Throw in extra emotes, victory poses, and title screen character backdrops. These heroes have an undeniable wealth of personality that can’t be topped.

Nevertheless, the main thing getting everyone excited for Overwatch 2 was its story mode—and it’s not ready yet. Begs the question, how does this game differ from the original Overwatch? 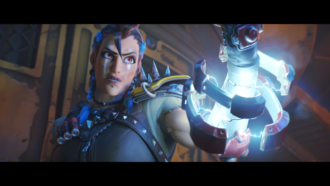 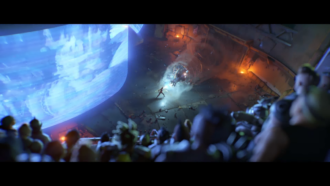 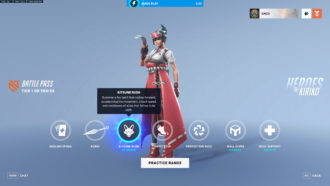 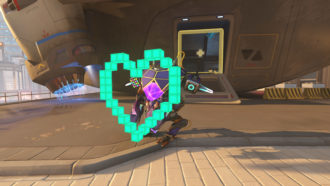 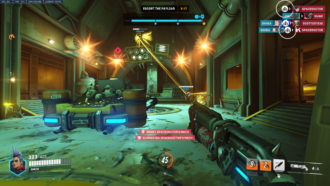 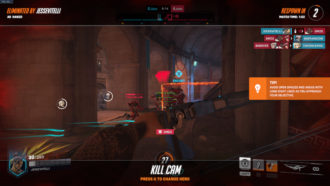 Aside from the fact that Overwatch 2 is a free-to-play game, it is also shifting to a seasonal battle pass model. Each season will feature fresh experiences and ways to play, introducing new heroes or maps to shake up team strategies. The 80-plus levels unlockable in each themed battle pass include a range of various skins, emotes, voice lines, sprays, and other cosmetics for the entire cast of characters.

Honestly, the battle pass and free-to-play decision is the necessary move for Overwatch to remain relevant among other giants in the competitive multiplayer scene. Removing loot boxes is an essential step in minimising the underlying impact of the controversial monetisation method, especially for an art style tailored for a wider audience. Battle passes are contentious in their own right. Still, nothing in this initial season benefits a player’s gameplay skills, and it’s a tested method of satisfying progression. Overwatch 2 will likely stick around for much longer by going free-to-play.

The commitment to a battle pass means more content, too. The sequel already launches with numerous wonderfully designed maps against the exemplars, including Circuit Royal, Midtown, Paraiso, Colosseo, Esperança and New Queen Street. The fun Push game mode, a ‘tug-of-war’ type where teams push for control over a robot that begins in the centre of the map, is a core competitive addition to the game. According to the development timeline, almost 200 skins will be released annually for Overwatch 2, compared to 42 on average for the original version.

Changing the model of content and seasons is what truly makes this game Overwatch 2. It’s an entirely fresh approach to the game and fits it superbly. A dedicated list of content that allows players to choose how much they want to invest is a brilliant way to keep the community excited and active. 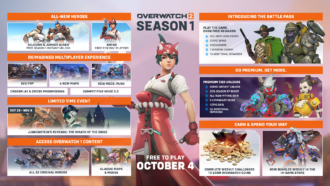 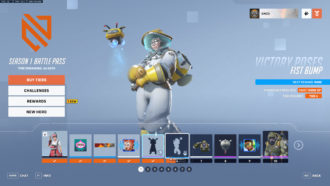 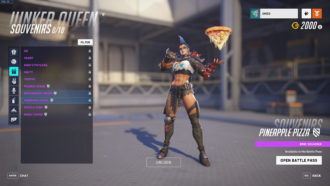 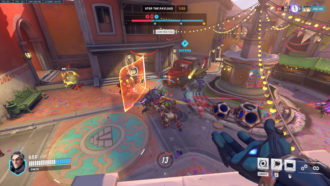 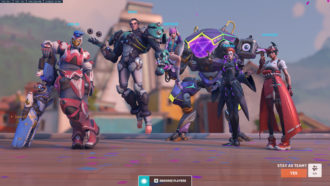 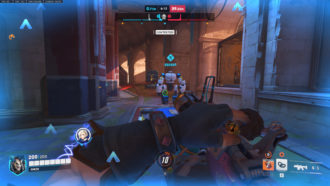 The most significant change to gameplay is the switch to the tighter teams of five. In ranked matches, teams now include two damage, two support, and one tank character. Limiting to one tank necessitates greater skill and planning from that position; the entire team is now reliant on a single individual to fulfil their important job. It’s an excellent method for condensing and focusing team tactics into defined responsibilities.

However, teams still need power when driving home a payload or pushing back against the omnic-robot. So, a tank’s role is awkwardly split between offensive pushing and defensive play. A handful of tank heroes just don’t have a good balance to be the best of both worlds. In our play sessions, the team format change resulted in Reinhardt getting the most use in play and as always with Overwatch balancing will be a problem but tweaks will eventually come. For now, it’s wise from a competitive standpoint but needs refining.

“…as always with Overwatch balancing will be a problem but tweaks will eventually come.”

Other tweaks to gameplay mechanics help keep it consistently entertaining. There are longer cooldowns on stun abilities and a 25 per cent increase in movement speed for damage roles, which improves the flow of combat and reduces frustration, Cassidy being the main example here. Players also retain up to 30 per cent of their ultimate charge when switching heroes to keep those sensational moments in play more often. Most tanks have had health and knockback resistance boosts, benefiting formerly damage-based heroes like Doomfist. A laundry list of smaller changes like these makes the overall gameplay better than before.

The First Time User Experience (FTUE) is for those who haven’t played before or reading the last few paragraphs of this review and are completely lost. Purposely designed for new players who make an account post-launch, FTUE gradually welcomes players into the game, heroes, and mechanics. It’s a smart way to ease players into the universe without overwhelming them with the roles of each hero, specific game modes and map strategies, and team compositions. The egregious part here is that some game modes and heroes are locked until approximately 100 matches are played. That is an exceptional amount of game time before you can fully enjoy Overwatch 2. 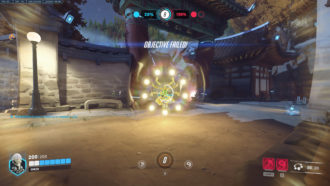 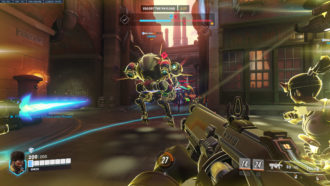 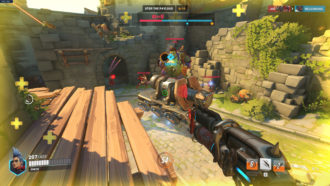 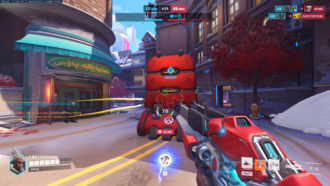 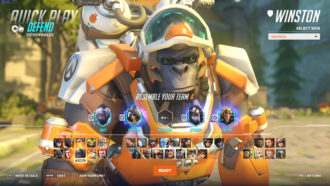 You seem familiar. Ain’t I killed you before?

While Overwatch 2 may not look like a new game from a glance, it advances in functionality and visuals. Playing on servers from North America during this preview access, latency was surprisingly not much of an issue. Players moved around fluently, there were no delays to countdowns, and no kill-trading either. Admittedly, it was harder to connect with projectile-based attacks versus hitscan weapons which felt much better. Regardless, Blizzard’s servers are impeccable and provide a consistent online experience.

Overwatch 2 also introduces a suite of protection and safety measures for online play. Called the ‘Defense Matrix Initiative‘, the systems aim to mitigate the realm of issues that come with free-to-play gaming communities. There’s now a required barrier of account protection using SMS verification, machine learning and audio transcriptions of in-game chats to identify malicious behaviour, and a dedicated team of Engineers, Designers, Data Scientists and Security Analysts investigating and monitoring online play. This innovation in community safety is astounding and will undoubtedly make the game a better place.

Visually, the upgrades are minor but still enough to feel like a game from 2022. Besides the costume updates to existing Overwatch heroes, there’s additional detail in lighting and shadows that deepen the environments and characters. It’s an incredibly subtle addition and seamless without looking at comparison screenshots.

Revisions to menus and user interface (UI) well reflect the battle pass model. Unlike many free-to-play games, menus are structured and clean with clear pathways to career profiles, getting into a game quickly, or customising options. On the other hand, Overwatch 2’s in-game UI is a mess. With cluttered player kills in one corner, status effects using significant portions of the screen, and flashing lights from ultimates there’s way too much happening at once. The chaotic in-game display was an issue before and is much worse now, so be wary if you are prone to sensory overload.

Overwatch 2 restores the fantastic hero shooter by making it free for all to enjoy. Changes to multiplayer mechanics make gameplay even more enthralling and address annoyances with the original. Although, there are still valid concerns about hero balancing, UI overload, and the future of the battle pass model. While it may not feel like a true sequel without the promised PvE story mode, Overwatch 2 can potentially be the most popular shooter on the market.