The studio is already focusing on their first project. A “new character and narrative-driven” adventure, sprouting absolute joy to many fans of Star Wars: Knights of the Old Republic and Dragon Age.  Much more will be properly revealed during Melbourne International Games Week on Friday 11 October at PAX Australia (October 11-13).

Honestly, I can’t tell you how excited I’ll be to FINALLY be able to talk about the project and my team. The chance to involve you all in the process is really going to make this extra special, considering I’ve never done anything quite like this.

David Gaider, the lead writer on Dragon Age: Origins and Neverwinter Nights: Hordes of the Underdark. He famously wrote the charmingly devilish HK-47,  Carth Onasi, and Jolee Bindo for Star Wars: Knights of the Old Republic.

Games designer, writer, novel author; this new studio is in good creative hands. Gaider is a games industry legend and seeing the inception of Summerfall Studios, along with Esler, invites so much potential.

If you like character-driven stories, intrigue, adventure and a little bit of romance… head over to https://t.co/CVRhqQJMVK and sign up to our mailing list. We’ll be sending an exclusive preview next week to everyone who’s signed up, and it’ll be the best way to stay up to date!

Liam Esler is a business development and narrative gun from Melbourne, Australia. With roots working on Pillars of Eternity for Obsidian Entertainment and Baldur’s Gate remasters for Beamdog, Esler is a local development hero. Heavily contributing to the Game Developers’ Association of Australia and GX Australia, this gun helped support and thrive LGBTQI+ gaming culture.  Now Co-Founder and Managing Director of Summerfall Studios, fronting marketing and business, the sky’s the limit for this humble team.

Following their announcement on 11 October at PAX Australia, a Kickstarter campaign will launch to support their first project. Everything is currently under wraps in terms of what it will be. However, subscribers to Summerfall Studio’s mailing list will be the first in the know after the public reveal. The leads along with Elie Young, Benjamin Ee, Troy Ferguson, and many others will have something special ahead. 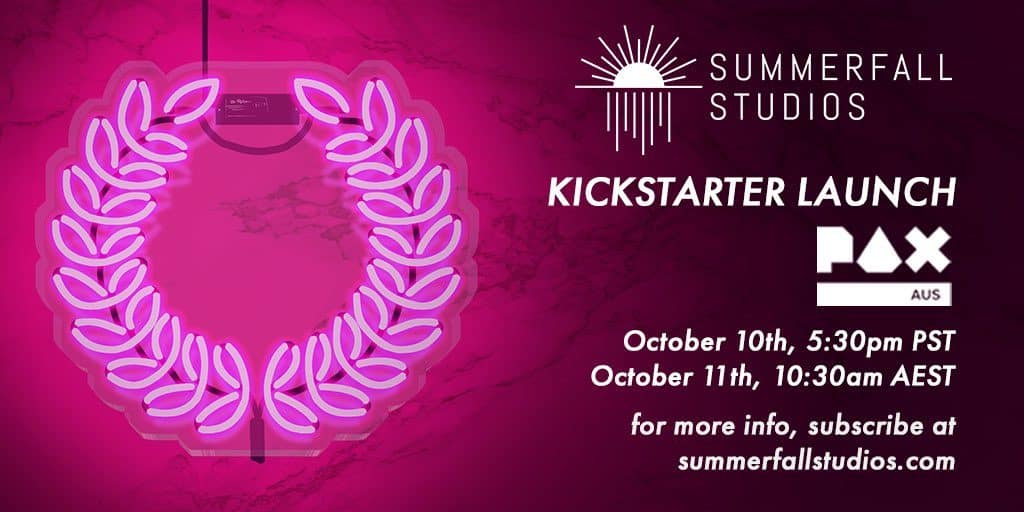 It is heartening to see so much Australian games industry news. The Aussie environment was looking poor following terrible shutdowns and layoffs earlier in the year.  With Sledgehammer Games opening in Melbourne, Fortress Gaming’s new esports venue, and now Summerfall Studios; Australian games are back in full force.

Make sure to keep up to date with what else is happening in the industry by following our social media channels. Check out our radio show and podcast on JOY 94.9 to hear us squeal about all these exciting announcements!